Talking Heads co-founder David Byrne has made New York's Battery Maritime Building sing — literally. The once-busy ferry terminal was fitted with wires, hoses and solenoids. This isn't Byrne's exercise in being arty. Anyone can play the building. 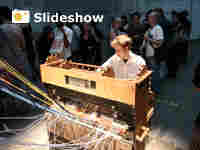 See a photo gallery of the building. 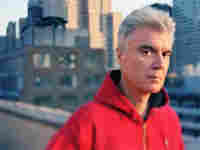 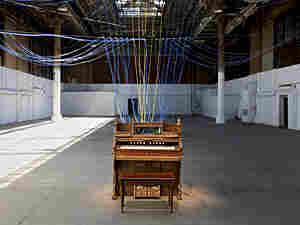 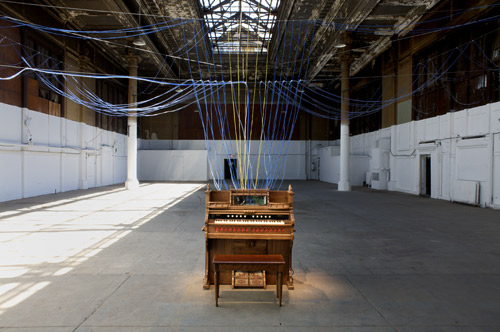 The man who burned down the house is now playing the building. Pop star David Byrne, formerly of Talking Heads, has turned the inside of a defunct ferry terminal into a giant musical instrument, retrofitting an antique organ and wiring it to the pipes, the beams, and even the plumbing of the Battery Maritime Building.

Called Playing the Building, it's a project he first launched in Stockholm, Sweden, before bringing it to lower Manhattan in New York. WNYC Soundcheck's John Schaefer stopped by the cavernous hall a few days before the opening to talk to Byrne about why New Yorkers might relate to turning a building into music.

Byrne says New Yorkers will be familiar with buildings that make noises. "If they've ever lived in an apartment with radiators, they'll be familiar with noises that start usually at night or early in the morning. Also, with plumbing, they won't know about air blowing through plumbing, making nice flute-like sounds; they'll know about hissing air coming out of plumbing."

The installation at the Battery Maritime Building was constructed to be entirely acoustic, meaning no electronics are employed to create the sounds. "It's very old-fashioned," Byrne says. "I don't know if it could have been done 100 years ago, but pretty close to it."

With no speakers and no microphones, the sound is produced mechanically by hitting parts of the building, causing the girders to vibrate, or blowing air through pipes. While no traditional tones are used, the sounds roughly go from low to high on the keyboard: The motors are the bass notes, the pipes in the middle, and the flutes, the pipes, and the things that strike the pillars and radiators serve as the higher tones.

Byrne says he finds that there's a social aspect to the project, as well. "I found that people were not intimidated about playing it when they realized what it was doing and it wasn't set up like a conventional keyboard," he says. "Someone who was a great organ player or piano player didn't have any advantage over an amateur just walking in, sitting down to play it for the first time."

"I think that made people feel less inhibited, because it's really transparent [in] what it's doing," Byrne says. "You can see the machine, so people wander around and see how the sounds are made. Nothing is hidden. They can see exactly how everything is done."

While Bryne acknowledges that he did help create the instrument, he admits that he isn't the composer.

"If somebody makes an instrument, you wouldn't say the person who made the violin is the composer of what people play on the violin," he says. "But to a certain extent, if you make a kind of music system, whether it's a software-based thing or something like this, it directs people to the kind of music they can make on it. But it doesn't tell them exactly what they can do."

For Byrne, one of the most important aspects of the building is that it's not art or music that people come to simply consume. "It's not something that's already finished and done by a professional or an expert," he says. "It's something that the public has to do."