Accessibility links
Gulf Coast States Mull Over Oil Drilling Ban Lawmakers are considering lifting the 27-year ban on offshore drilling along much of the nation's coastline. Though the ban's supporters have said drilling would drive tourists away, some say that current production platforms off the coast of Alabama are benign fixtures. 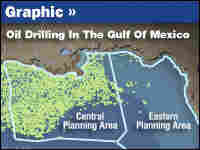 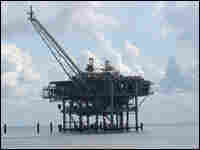 Natural gas platforms like this one can be seen off the coast of Alabama. Debbie Elliott/NPR hide caption 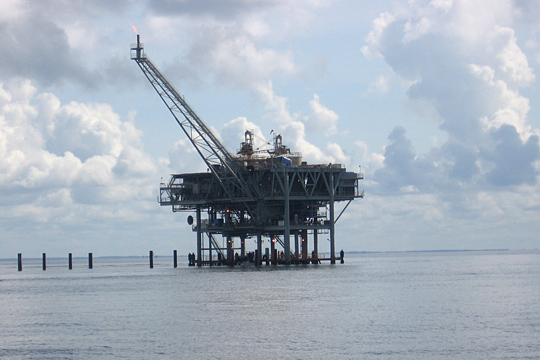 Natural gas platforms like this one can be seen off the coast of Alabama.

As gas prices continue to climb, lawmakers in both parties are looking for solutions, including lifting the 27-year ban on offshore drilling along much of the nation's coastline.

Congress first approved the ban after thousands of production facilities were erected in the central and western Gulf of Mexico. Top Florida Republicans have backed the ban on drilling off its coast, but now some are changing their minds.

On Monday, President Bush is expected to lift the executive ban on offshore oil drilling, but Congress would still have to lift its legislative ban before drilling could happen.

Oil and natural gas platforms dot the Gulf off the coasts of Texas, Louisiana, Mississippi and Alabama. Off Florida's coast, however, the scene from the beach is different.

Enid Sisskin of Gulf Breeze, Fla., would like to keep it that way. Sisskin, a board member of the group Gulf Coast Environmental Defense, has been fighting proposals to drill in the eastern Gulf for 16 years.

Sisskin notes that tourists visit the Pensacola, Fla., beaches for white sands and emerald waters. Tourism not only fuels the economy here; it's the economic engine for the state.

"It's what people come here for," Sisskin says. "We're not willing to sacrifice our economy for what is potentially a very small amount of oil or gas in comparison to the world supply and will do very little if anything to lower prices."

Traditionally, that has united politicians from this area. Democrats and Republicans alike support the federal moratorium on offshore drilling.

But GOP presidential candidate John McCain reversed his long-standing support for the ban, and now Crist has, too. Crist says he would support production off Florida's coast as long as it was "far enough, safe enough and clean enough."

Republican Jeff Miller, who represents northwest Florida in Congress, says the days of shielding Florida's waters from production activity may be over.

Miller opposed offshore drilling when he was first elected to Congress in 2001. But now he favors lifting the ban, as long as production activities don't interfere with military operations in the region. (The Air Force uses the Gulf for training exercises.)

"I think when the public begins to change their tune ... then elected leaders need to be paying attention as well. The breaking point seemed to be $4-a-gallon gas," Miller says.

Even some Democrats in Congress — notably members of the conservative Blue Dog Coalition — are bucking their leadership and now support legislation to lift the offshore moratorium.

Miller says he's been hearing from local businesses that it's time to use the resources that might lie beneath the eastern Gulf.

The Minerals Management Service, the federal agency that manages the nation's natural oil and gas resources on the outer continental shelf, estimates there to be some 3.6 billion barrels of oil in the Gulf. That's roughly as much oil as the U.S. consumes in six months. There could be even more natural gas

Some prominent business groups don't think drilling is worth it.

Sandy Johnston, executive director of the Pensacola Beach Chamber of Commerce, says that drilling in the Gulf would be her worst nightmare.

"We have everything to lose and nothing to gain. Nothing," Johnston says. "Drilling is not going to change the price of gas today, next week, next month or next year. It's just going to destroy a beautiful location."

While the debate rages in Florida, less than 60 miles to the west, coastal residents and tourists see a different seascape. On Dauphin Island, a barrier island south of Mobile, Ala., natural gas rigs can be clearly seen from the beach.

Frances Coleman, the editorial page editor of the Mobile Press Register, says that the rigs don't really make any noises that can be heard on land.

"At night you can see some of the lights. But other than that it's just interesting little blips on the horizon. It's just part of this area, what we see when we go to the beach," she says.

From where Coleman sits on the beach, about 13 of the steel structures can be seen. The producing wells have a long arm jutting up that looks like a construction crane with a little flame on top.

Occasionally, boats travel between the platforms. Some are fishing the underwater structures where fish congregate. Others appear to be supply vessels. Coleman calls it a mixed-use image — the Gulf here being used for both commerce and recreation.

Energy companies started producing natural gas off Alabama's shores in the early 1980s. Today, there are 49 wells that generate more than $500 million a year in royalties and other state revenues, according to the Alabama Oil and Gas Board.

According to Steve Russell, director of business expansion and retention at the Mobile Chamber of Commerce, the natural gas is distributed as far north as New York and New Jersey as well as to Alabama and Florida.