Accessibility links
Boarding Schools Generate China's Sport Stars Projecting athletic prowess has been a top priority for the Chinese government over the years. And it is some of the country's littlest citizens who must carry this responsibility. From the age of 4, select Chinese children are molded into the nation's elite athletes. 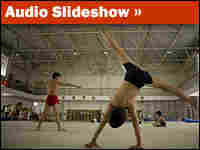 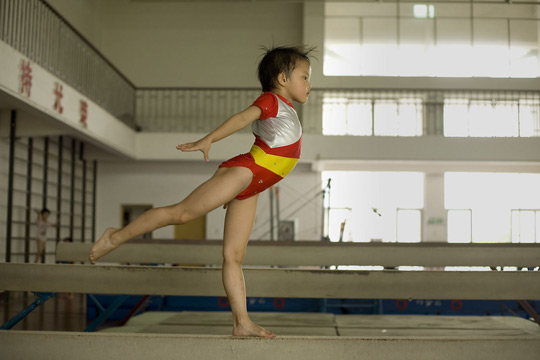 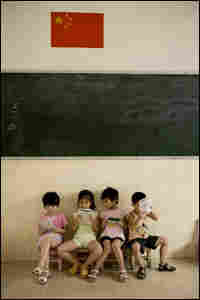 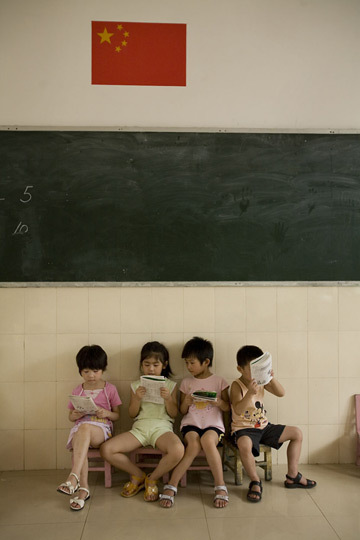 Young children in a morning class at the Li Xiaoshuang Gymnastics School.

China's economy is booming, and the country is rapidly modernizing. However, a long-held national sports infrastructure remains intact, a reminder of China's centralized Communist structure.

Children as young as 4 are plucked and brought up through the national athletic training system. If they are good enough, they're put on a government salary to perform full time.

The task of rethinking this antiquated system has been put on hold; China's desire to win gold medals on its home turf at the Beijing 2008 Summer Games takes precedence.

In order to wage sporting battle, China has long poured an inordinate amount of money into elite athletes and the schools that train them starting at the age of 4.

While market forces and modernization have begun to revolutionize the nation, its sports infrastructure remains a vestige of another era.

On example is the Li Xiaoshuang Gymnastics School in Xiantao, in the province of Hubei.

Weeding Out The Weak

At the gym, a girls calls out "seven minutes," as sweat drips down her brow and onto a watch between her hands on the floor. She is the timekeeper, and she is counting down a 10-minute handstand for a group of young gymnasts. The children are red-faced with exertion, some grunting with effort, as their coach looks on.

These tiny athletes know they are part of a glorious tradition. Three Olympic gold medalists got their start doing handstands at this very school.

Around 100 youngsters, between 4 and 9 years old, train at Li Xiaoshuang. Most of them board at the school to take advantage of its nine gymnastic coaches.

The staff here works for the Chinese Government's General Administration of Sports. Headmaster Tian Hua says the school is an integral part of the country's sports system.

"Our Chinese sports system is like a pyramid. We're the base, the fattest part of the pyramid. The middle of the pyramid is the professional provincial teams, and the national team is the apex," says Tian. "Our main role is to choose future athletes."

That process can be brutal, even at this stage. China's sports schools are designed to produce gold medalists, regardless of the human cost.

"I've trained until I cried many times," one small boy says as he takes time out from gym practice. "Sometimes we have to stand on our hands for half an hour."

"It's only hard at first," another boy chips in breezily. "Then you get used to it."

Coach Zheng Hunsheng denies that the children are forced to do half-hour handstands. "Their young bones are too soft to withstand it," he says. "We use scientific training methods now."

Gymnastics — in any country — is a tough and painful sport. And Beijing's sports machine has generally had bad press. Yet some argue that Chinese athletes are in some ways more fortunate than their Western counterparts, particularly as they are paid a government salary.

"Financially, their life is probably a bit easier than most athletes, at least in the U.S.," argues Susan Brownell, a sports anthropologist from the University of Missouri, who has been working at Beijing Sports University.

"Most Olympic athletes in the U.S. are still supporting themselves by college scholarships or other jobs," says Brownell. "The result in China is that athletes can concentrate fully on their training."

Brownell trained as a college athlete both in the United States and China. She says for athletes, life in China is in some ways easier than it is in the U.S.

"They seemed to me a little bit more pampered," she says. "You did have people who cared about your physical and psychological well-being taking care of you. If I needed a massage, I could get a massage. In comparison, in the U.S. a lot was left up to me."

Even though it is remote, the Li Xiaoshuang gymnastics school is a beneficiary of state largesse. It has received $14 million in funding over the past decade.

Indeed, China gears its sports system toward developing elite athletes — investing in sport for the masses takes a distant second place. The director of the Institute of Physical Science under the General Administration of Sports estimates that each Olympic gold medal has cost Beijing around $7 million.

With its top-down centralized control, China's sports system is the last bastion of the socialist planned economy.

Any large-scale reform has been delayed by the need to win medals at this year's Olympics, says Xiong Xiaozheng, from the Centre for Olympics Studies at Beijing Sports University.

"Winning glory at the Olympics is costly," says Xiong.

Some even argue that the imperative to win medals at Beijing's Olympics has ended up strengthening the old sports system favoring elite athletes.

Glory For The Nation

Back at the school, as the pint-size gymnasts do exercises on the playground, Li Shukui watches anxiously. He is visiting his 6-year-old twin girls. They have spoken once a week over the phone since he enrolled them in this boarding school. It is hard to be apart so much, he admits, but worth it to fulfill his dream.

"When I see Chinese athletes winning gold medals overseas, I'm so moved I can hardly describe it," Li says. "I'd like my daughters to win a gold medal to win glory for the country."

The allure of glory and gold tempts hundreds of thousands of parents to pressure their precious only children into lives of sporting servitude.

"If my children don't get picked to carry on in gymnastics," Li says, "I'll move them to diving."

These words are a tacit admission that on the battlefield that is competitive sport, these children are little more than cannon fodder.