Accessibility links
Hydro-Electric Project To Reshape Wilderness A controversial plan to divert Canada's Rupert River will soon provide power to tens of thousands of U.S. customers. It's likely that once the project is finished, everything along the river corridor will change, says a geologist familiar with the river.

Reporter Brian Mann visited the Rupert River in Canada this summer as part of a public radio documentary project called Encounters. The goal was to capture a glimpse of a wilderness that will soon change forever after a hydro-electric project diverts the massive river. 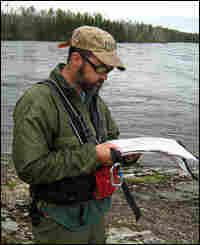 Phil Royce, an outdoor guide and geologist from St. Lawrence University, charts the next set of rapids on the Rupert River. Brian Mann for NPR hide caption 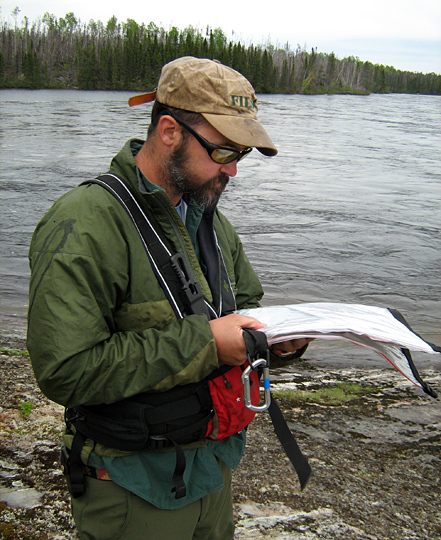 Phil Royce, an outdoor guide and geologist from St. Lawrence University, charts the next set of rapids on the Rupert River.

America's growing hunger for energy — especially low-carbon, alternative energy — is changing landscapes all over the world.

In Canada, a controversial plan to dam and divert the Rupert River will soon provide power to tens of thousands of customers in the U.S. The sluice gates on Hydro-Quebec's diversion canals will open next year.

The Rupert River valley is one of the wildest places in North America.

My paddling partner, Phil Royce, is a geologist and a river guide with St. Lawrence University. Royce has been paddling these northern rivers for more than a decade. It takes all his skill to maneuver our slender canoe down a shifting maze of boulders and ledges.

The Rupert River rages so full here and races so fast that the foam piles up two and three stories high. In places, the Rupert River sprawls half a mile from bank to bank. A Canadian agency called Hydro-Quebec plans to harness about 60 percent of this water, funneling it north into an existing complex of dams and reservoirs.

But this isn't a story about a fierce environmental debate. The political wrangling over the Rupert River is over. Green groups who opposed the project have given up and gone home. The Cree, whose villages straddle the river, signed a treaty allowing it to go forward.

With the diversion set for next year, Phil and I just wanted to see this place firsthand and record what it looked like. He says the valley was first shaped during the last ice age.

"Ten- to thirteen thousand years ago, the rivers formed. The major course usually stays the same within human time, as long as some people don't dam and divert them," Royce says.

We're standing on the boulders above a waterfall — one of dozens of waterfalls that will go dry when the river is dewatered.

What will a new, man-made version of the Rupert River look like?

"Everything will change — everything along this river corridor," Royce says.

The payoff for Hydro-Quebec and its customers will be huge. Billions of dollars worth of low-carbon electricity will power air conditioners and streetlights across the Northeastern U.S. and Canada — without adding to the world's greenhouse gases.

But as we make our way downstream, I can't help thinking that much of the world's remaining, untapped energy lies in out-of-the-way places just like this. And I'm reminded again and again of the trade-offs: As Phil and I quietly paddle toward shore, a gray wolf that had been howling came right down to look at us. I'm sure that with the wind at our backs, he could hear us approaching.

Then the wolf slips away into the alders at the river's edge.