Listen
Many Chinese Athletes Find No Glory In Retirement

The second of a five-part series. 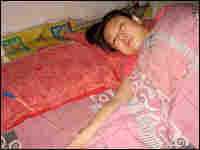 Zhao Yonghua, 31, spent much of the past decade in bed. Once a national skiing champion, she says overtraining helped cause her body's deterioration. Louisa Lim/NPR hide caption 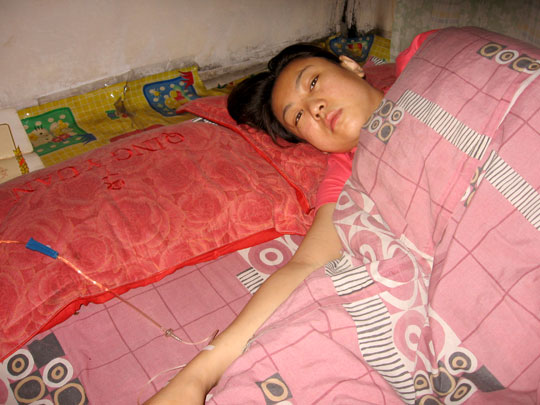 Zhao Yonghua, 31, spent much of the past decade in bed. Once a national skiing champion, she says overtraining helped cause her body's deterioration. 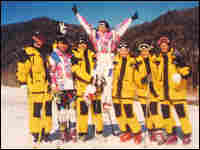 Zhao in happier days with the Chinese army ski team. Zhao, center, is hoisted by her teammates. She left home to join the team at age 13. Courtesy of Zhao Yonghua hide caption 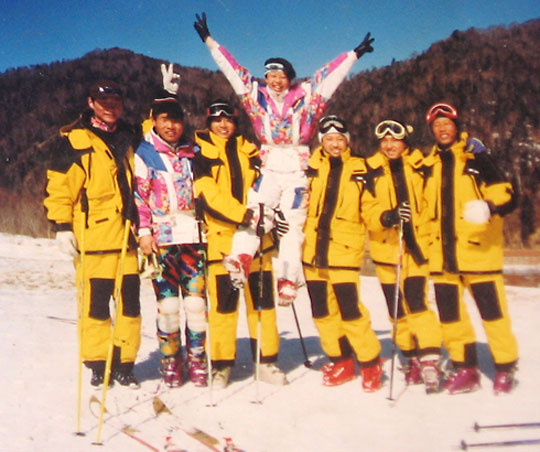 Zhao in happier days with the Chinese army ski team. Zhao, center, is hoisted by her teammates. She left home to join the team at age 13.

China's economy is booming and the country is rapidly modernizing. However a long-held national sports infrastructure remains in tact, a reminder of China's centralized Communist structure.

Children are plucked from as young as four, brought up through the national athletic training system and, if they are good enough, put on a government salary to perform full time.

China's path to Olympic glory is littered with human sacrifice — that of athletes who failed to make it to the top ranks of sports.

The country now has tens of thousands of retired athletes whose single-minded dedication to their sport never equipped them for life beyond it.

From Champion To Invalid

Zhao Yonghua is 31 years old, but her lifestyle is that of someone much, much older. She lies in bed in the bare room she shares with her mother in the city of Tonghua, in northeastern China. Covered by a quilt despite the summer weather, Zhao has an IV in her arm and is too tired to speak. This is how she has spent much of the past 10 years. It is hard to believe this bedridden invalid was once a national skiing champion.

"My life then was just training. We trained at dawn, in the morning, in the afternoon, even in the evening," she says. "We didn't really do any school work."

Her mother, Sun Fuyou, rifles through faded photos of a beaming young girl in ski gear.

She was just 13 when she left home to join the Chinese army's ski team, her mother says. That was once seen as a preferable path to athletic glory because of the honor and material benefits of being a soldier.

In 1997, Zhao won four gold medals at the national championships. Then she got sick. The army coaches initially dismissed her illness as a cold. But when she ended up in the hospital, doctors diagnosed her with severe diabetes.

"When she left hospital, I asked the army if I could take her home to convalesce because her diabetes was so serious, but they said she had to go for winter training with the army team in northeastern China," says Sun of her daughter. "When I left, she saw me off at the station and we both cried."

Despite her perilous health, Zhao won gold and bronze medals a year later. But the training took its toll, and soon after she was forced to retire from skiing.

Selling Her Gold For Medicine

When asked if her illness is a result of her training, Zhao responds without stopping to think.

"Of course they're related," she says. "Because when you have diabetes, you're easily tired. And training is extremely intense. Every day you're exhausted."

At that time, most athletes were assigned jobs - many as sports instructors or team coaches - or given compensation when they retired from their sport careers. Zhao was given around $1,000 but was never given a job, despite repeated pleas for work. Eventually, she ran out of money to treat her diabetes properly.

She was unable to afford the synthetic insulin used by most diabetics. Rather, she used a less expensive insulin extracted from animals. The lack of proper treatment brought complications. Her sight began to fail, and last year she was on the brink of blindness.

"Zhao bought a bottle of pesticide and wanted to commit suicide," recalls her mother. "I persuaded her not to, telling her, 'Heaven never seals off all the paths. You are so young.'"

The mother and daughter decided to sell one of Zhao's gold medals to raise money for her treatment.

Zhao's gold went for about $3,000 in a sale organized by the Olympic Star Security Fund, a Beijing-based charity that assists athletes facing difficult retirements.

China Sports Daily, a newspaper run by China's Physical Education and Sport Committee, estimates that of the country's 300,000 retired athletes, 80 percent are jobless, injured or impoverished. Recognizing the scope of this problem, the Chinese government in 2007 decided to dedicate $4 million annually to welfare and vocational training for former professional athletes.

Ji Ting, founder of the Olympic Star Security Fund, fears many of China's former sports stars will be unaffected by the government assistance.

"There might be some difficulties in implementation, because there's such a huge group of Chinese athletes," says Ji. "I don't think it can cover every one of them."

Ai Dongmei, a 27-year-old former marathoner, works for Ji's charity. She also retired from sport at a young age, impoverished and with injuries.

To make ends meet after her government-subsidized athletic career, Ai began selling popcorn. With feet crippled from years of overtraining, she tried to sue her coach for inhumane treatment. She settled with the coach out of court.

Speaking in a low voice, Ai says things are better now. Today she is married, with a 2-year old daughter.

Marriage and children remain an impossible dream for ex-skier Zhao, whose mother is brutally frank about her prospects.

"She has such a serious illness, no one would want her," her mother says. "Other girls have boyfriends, get married and bear children — my daughter just lies in bed all day."

Zhao and her family believe there is no possibility of recovery; her body was degraded for so long that she will likely never return to her former state.

Zhao gave her health and youth to China. Now, at an age many in the West consider the prime of life, she lies in bed in front of a blaring television. Weakened from overtraining, she failed as a sports star. But her years of athletic training also left her with little formal education, no useful skills and isolation from the wider society.

Like so many thousands of China's discarded athletes, her future too has been sacrificed on the altar of national pride.