Accessibility links
Brooklyn Store Celebrates The Art Of Graffiti Alphabeta, a new art supply store that sells cans of spray paint and provides a space for graffiti artists to showcase their work, has only been open for three weeks. But one New York councilman is already seeing red. 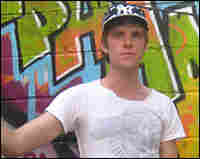 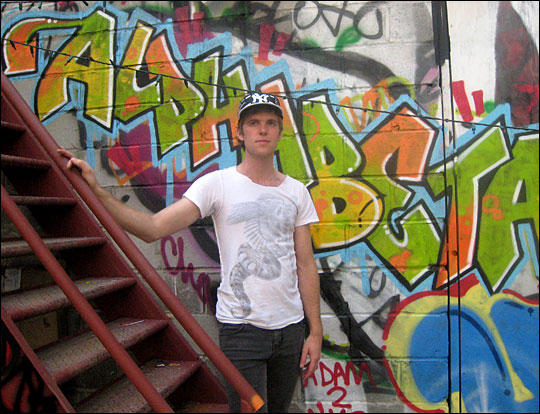 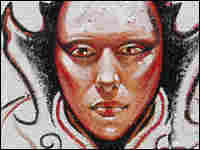 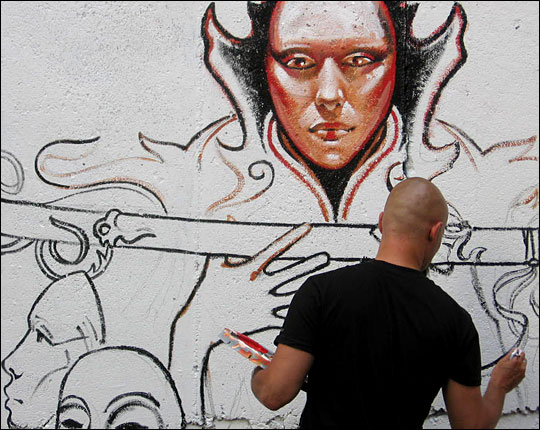 Franke, a German artist now living in Vienna, paints a mural as a recent event at Alphabeta. 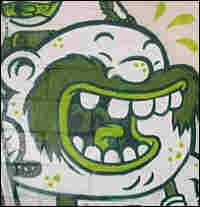 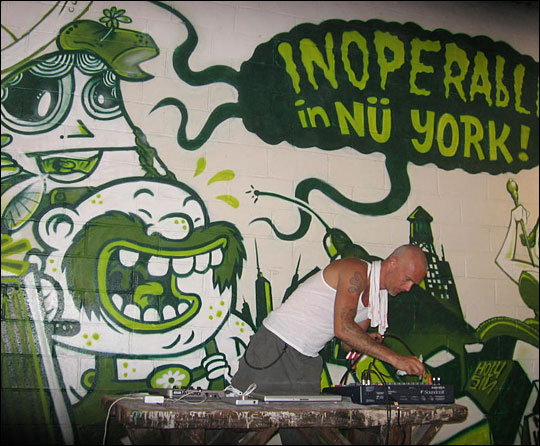 Austrian artists painted the mural in the background just hours before a recent party sponsored by the Inoperable Gallery in Vienna and Overspray magazine. A Viennese DJ known as Stereotype gets ready to play some music.

Graffiti has always had a double edge. Often reviled as a symbol of lawlessness and the deterioration of neighborhoods, it can also be a form of cultural and artistic awakening. There's even evidence of graffiti in ancient Ephesus in Greece and in ancient Rome.

"Who knows why people write on the wall, or where that instinct comes from," says Charlie Halsey, one of the founders of Alphabeta, a new Brooklyn-based community art space and event space that also sells graffiti art materials. "As far as I know, people have been writing graffiti since the dawn of mankind."

Alphabeta has only been open for three weeks — it's so new that it doesn't have a phone number or a Web site — but one New York City official is already sounding the alarm.

The store is a single room on Greenpoint Avenue in Brooklyn. It features a larger outdoor space where murals can be painted on high walls and painted over and over again. Inside, there are racks of T-shirts, spray-painted hats and boxes of deadstock sneakers that were popular with graffiti and hip-hop artists in the 1980s and 90s.

New York City Councilman Peter Vallone Jr. has made the eradication of graffiti a personal mission. Vallone says it's naive to believe the store will "cater to legal graffiti art, because there is just not enough of that to turn a profit." Vallone believes that only a small fraction of graffiti art is legitimate.

Councilman Vallone came of age in the 1970s, when graffiti was associated with New York's rising crime rate and the deterioration of neighborhoods. But recently, the Tate Modern Museum in London had graffiti artists paint the building.

Andrew Michael Ford, the director of the Ad Hoc Art Gallery in Brooklyn, says he knows street art has come of age when there are art shows like the one at the Tate:

"It sent a wave around the world that it's legitimate, relevant and people need to pay attention to it," says Ford, who adds that he believes graffiti art and other forms of street art will be appearing in more museums in the future.

The people who run Alphabeta want to ensure that the store is a success by riding that wave. Its founders hope that it will be as much an art space and event space as it is a store. To this end, Alphabeta has hosted five parties in its first three weeks of existence.

At a recent event, sponsored by the international graffiti art magazine Overspray, eight Austrian artists from the Inoperable Gallery in Vienna were doing "live" painting on three walls of the store's outdoor space. When asked what he was doing, an artist who goes by the name of Franke, said that what he does is only for fun, "and pure joy."