Accessibility links
Atmosphere: Unplugged Emotions In a rare acoustic performance, the hip-hop group Atmosphere performs with just an acoustic guitar and two voices. Frontman Slug is a Minneapolis native with an inspiring message, especially on Atmosphere's new album, When Life Gives You Lemons, You Paint That S--- Gold. 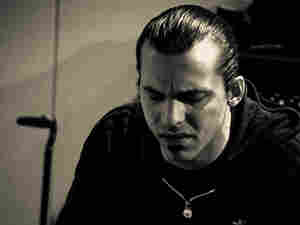 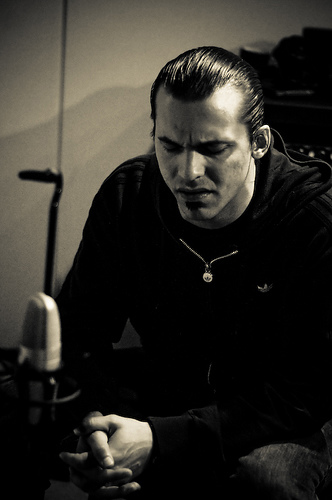 I was looking forward to having Atmosphere visit us at KEXP, in part because the band is from my old hometown of Minneapolis. That city has always had a vibrant, active music scene, and I was eager to hear more about how underground hip-hop has emerged since members of Atmosphere helped start the Rhymesayers label back in 1995.

When I entered the performance space, I knew listeners were in for a treat. Rapper Slug (real name: Sean Daley) was joined by Nate Collis on acoustic guitar and Mankwe Ndosi on backing vocals (and, as Slug put it, serving as their "dietary advisor"). All three were huddled around a single microphone, ready to perform a rare, stripped-down set.

Hearing them perform "Guarantees" was genuinely moving. Slug's rhymes sounded even bolder against Collis' gentle strumming, and when Ndosi's beautiful voice joined in toward the end, it just made the message stronger.

And it's truly an inspiring message: Slug talked about how Atmosphere's new album, When Life Gives You Lemons, You Paint That S-- Gold, is the group's "optimistic" release. He discussed how he's tried to strengthen his songwriting. In the past, some of his rhymes were negative, but now he tries to find resolution in his storytelling, which guides him in finding resolution in his own life; that resonates throughout the new CD.

Before Atmosphere's in-studio set, I just happened to be playing a Tom Waits track on The Afternoon Show, so I had to ask about how the group came to collaborate with him on the song "The Waitress." Slug explained that he knows Waits' son and told a great story about how, when he asked Waits to contribute vocals, the legend said he'd contribute and instead sent him a guitar track, a shaker track, and some beatboxing. Slug joked that when it's time for him to return the favor, he'd send Waits a flute or tuba track.

With everyone laughing and in good spirits, I knew I had to close with a question I got from a listener right before the session started: A fan wanted to know if Slug was still "rocking the molester mustache," and noted that if he was, she was planning to replace him with Aesop Rock in her fantasies. I was happy to report back on the air that he was only rocking the soul patch — which Slug joked that he's had since he was 4.