Accessibility links
Students See World During 'Gap Year' As many high school graduates prepare for college this summer, others are getting their passports and heading off on a kind of sabbatical. A growing number of students are taking a short break from the academic grind in order to travel and work. 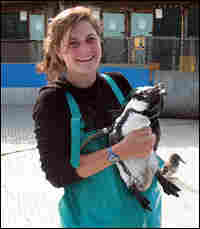 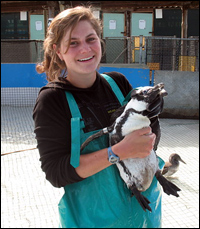 Sled-dog training with Gwich'in Indians in the Yukon

Apprenticeship with an outdoor muralist painter in Mexico

Conservation research on the Kamchatka peninsula in Russia

Internship with Coca-Cola in Azerbaijan

Bladesmithing classes in the U.S.

Intensive martial arts classes at a Shaolin Temple in China

Sail-training on a tall ship through the Great Lakes

Signs You Need A Gap Year

You love learning, but can't face having to write one more term paper.

You'd like to actually speak to someone in Spanish rather than just take another vocabulary test.

Partying is what you are looking forward to most about college.

Your mom and dad are "helicopter parents," and going to Australia might be the only way to get them to stop hovering.

Something inside you is telling you that the world is just a little bit bigger than your high school football stadium.

You suspect you might benefit more right now from learning how to cook for yourself and find your own place to live, than learning more about string theory or quantum physics.

You know you want to be defined by more than just your GPA and your SAT scores.

You find your job or volunteer work more compelling than your classes.

The idea of having to choose a major fills you with dread.

As many high school graduates spend time this summer getting their new laptops and linens to take to college, others are getting their passports and heading off on a kind of sabbatical. A growing number of students are taking what they call a "gap year." It's a break from the academic grind and a chance to explore the real world.

"Once you lock in to the next four years of college, there are expectations, and you'll never have this time to do whatever you want," says James Clark, a 17-year-old who just graduated from one of the best prep schools in the Boston area.

A self-described perfectionist, no one was really surprised when Clark got in to a bunch of top colleges. But he did surprise many when he wrote back to his first choice and said he wasn't coming — at least for now.

"I mean, unless I turn out to be a rock star," Clark says, "I'll never have this freedom again, and that's why I knew I needed to seize this opportunity."

Clark is off this fall to do field research in the Tibetan mountains, martial arts in Tiananmen Square and scuba diving somewhere in South America.

He says he hopes to "loosen up" and get in touch with what he really likes to do — without having to think about whether it will look good on his resume.

"It's really insidious," Clark says, "because I am always thinking in my head, 'is this right?' "

Gap Years On The Rise

Gap years have long been popular in Europe. There's no hard data on gap years in the U.S., but colleges, consultants and travel-abroad programs all say more kids are doing it.

At Swarthmore College, the number of gap years doubled this coming academic year. (Students who want to defer to take a gap year have to write a short essay on why they want the time and what they will do with it.) Dean of Admissions Jim Bock says overscheduled and overachieving kids are trying to reclaim the downtime that is otherwise built in to students' schedules.

"Summers have disappeared completely, sadly, because so many [students] are doing what they think will look good on college application," Bock says. "So I actually think the gap year may be the new summer."

For some kids, the gap year means time to pursue a long-time passion. For others, like Nicola Rentschler, it's about pushing yourself into new territory. Rentschler was never an animal person, but she signed up to help rehabilitate wild penguins in South Africa.

"You have to like, wrangle them, you have to hold them. They bite and they claw. You'd be surprised how many ways they can actually hurt you," she says. "It's a confidence thing because I had to push myself completely out of my comfort zone."

Depending on where students go, what they choose to do, and how willing they are to "rough it" or fend for themselves, gap years can end up costing anywhere from just a few thousand dollars to as much as $20,000. Many kids work at home for several months to save money – before heading off to teach English in Peru for example, or to work as a beekeeper's assistant in France.

Some parents are happy to foot the bill for that, rather than let a kid who is not ready for college waste a full year's tuition. Schools say kids come back from gap years much more mature, ready to learn and self-sufficient than they ever were when they graduated high school.

A lot of these kids are coming out [of high school] with one set of skills — that is: how to be a good student," says Gail Reardon, program director of Taking Off, a gap year consultancy group. "That doesn't really give [students] life skills."

Reardon's business has more than tripled in the last few years as more kids take gap years and need help making it happen. As Reardon sees it, gap years are about letting kids make mistakes — before their mistakes really count. But as gap year consultants and programs proliferate, college consultant Steven Roy Goodman says not all of them allow kids that chance.

"I mean, if everything is taken care of for a student, that does defeat some of the purpose of why [they're] engaged in this in the first place," Goodman says.

Others worry that gap-year programs will become the exclusive provenance of upper middle class kids who already head to college with many advantages. Gap years tend to be more common with wealthier kids looking for the kind of grittier, real world challenges that Johns Hopkins professor Stefanie DeLuca says other kids can't avoid.

"For the other end of the socio-economic spectrum, the gap year is not called the gap year," says DeLuca. "It's just called life."

Colleges say a gap year doesn't have to be costly. Students could intern with a state representative or work in a national service program.

Princeton University is planning to subsidize students who spend a year doing public service. Comparative Literature professor Sandra Bermann, who heads a committee at Princeton that is working out details of what they call their "bridge year," is hoping that 10 percent of freshmen will eventually take advantage of the offer.

"There's this chasm between the kids who have everything and get every possibility as they prepare for their college years, and those who are working every summer as cashiers just to get to college," she says. "We want to be really sure to make it as easy for them, as for anyone else, to experience something as transformative as the bridge year."