Accessibility links
'The Doorman' Bubblier Than Dance-Club Cristal The Doorman offers a genial take on the absurdities of the velvet-rope culture, in the process gently lampooning the nightclub set. Bob Mondello calls the titular gatekeeper a "hilariously preposterous movie creature."

'The Doorman' Bubblier Than Dance-Club Cristal

'The Doorman' Bubblier Than Dance-Club Cristal 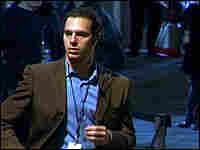 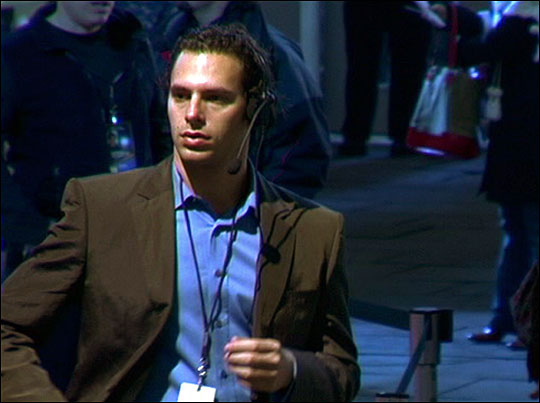 Not Rated: Trevor's most questionable act is luxuriating in a silk robe for just a bit too long. 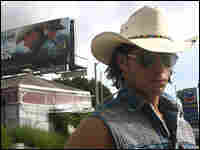 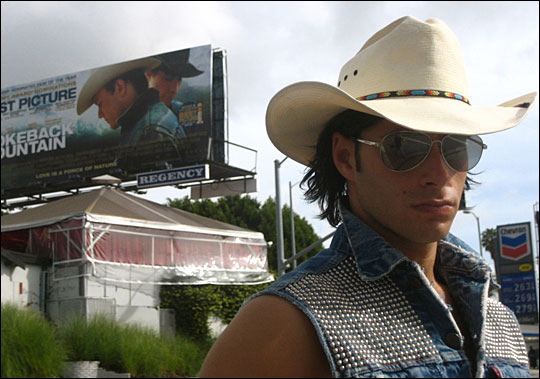 'You Can't Bring A Hat And A Backpack'

'It's All About Money... And Connections'

Trevor is a hilariously preposterous movie creature. In The Doorman, he seems sprung from an alternate universe, as unexpected in his individual way as a Wall-E or a Borat.

A preening peacock with a clipboard, handsome in an offbeat, Eurotrashy manner, he's the sort of person one is unlikely ever to encounter — that I, anyway, am unlikely to encounter — in real life: the divider at prestige events of the gorgeous from the less-than-gorgeous, the welcome from the unwelcome, the hot from the not. His aura is part arrogance, part ... well, it's all arrogance, really, as exquisite women greet him with air-kisses and whispered intimacies on their way into whatever club, fashion show, or rock-star trailer he's been hired to defend from an invasion of the unbeautiful.

Trevor is so secure in his ability to distinguish the hoi from the polloi that, for a while in documentarian Wayne Price's handheld, behind-the-velvet-ropes look at his place among the privileged, you may just see things through his eyes: the rigid pecking order, the petty jealousies, the divine right of A-Listers. But soon, the inconsistencies start to register — his too-fabulous home furnishings, his evasions about his past and even his present — and as he misconstrues terms, or looks, or gestures, his attempts to stage-manage his story finally falter.

I wish there were a way for every audience to see this movie as I did, utterly clueless as to its content and style. (There is a way, of course: Stop reading.) Alas — spoiler alert — to even minimally characterize the movie that contains Trevor is to reveal more about it than I knew when it was screened for me. For it took me fully half the film to realize that The Doorman is a mockumentary, and that Trevor is not a found object.

Rather, he is Lucas Akoskin, an Argentine unknown who both stars in and co-wrote what amounts to a brightly observant comedy of jet-set manners, in which such folks as boxing champ and club owner Michael Olajide, Miss Universe 2001 Denise Quinones, and filmmaker Peter Bogdanovich play themselves so effectively, it's hard to tell whether they were even let in on the joke. By the end of the film's scant 72 minutes, the conceit is on the verge of wearing out its welcome, but by then, it's created so much stomach-churning, quease-inducing, uproariously embarrassing humiliation for Trevor that it's become all but irresistible.