Accessibility links
'Mad Detective': Gritty And Grisly A twisted take on the usual Hong Kong crime film, Mad Detective is a psychologically harrowing thriller with a supernatural side. It even possesses elements of another Asian cinematic staple: the ghost story. 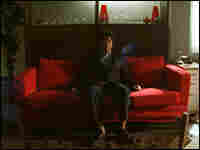 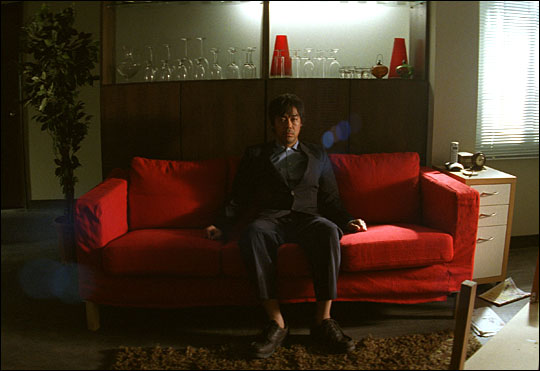 After approaching the brink of madness in the police force, Inspector Bun (Lau Ching Wan) adopts a reclusive lifestyle.

Not Rated: A few scenes of death, dismemberment, and livestock mutilation. 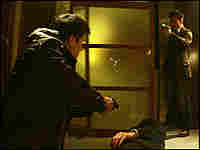 Inspector Ho Ka On (Andy On) is unaware that his partner Chi-wai (Lam Ka Tung) might have more facets to his personality than previously believed. IFC Films hide caption

Inspector Ho Ka On (Andy On) is unaware that his partner Chi-wai (Lam Ka Tung) might have more facets to his personality than previously believed.

There once was a method to the nuttiness of Hong Kong police inspector Chan Kwai Bun, the title character of the engagingly odd crime story Mad Detective. He solved crimes by attacking a pig carcass — an idea the makers of Wanted may have borrowed from this 2007 film — or having himself stuffed in a suitcase and thrown down the stairs. But within Mad Detective's opening minutes, Bun (Lau Ching Wan) goes too far and is forced to resign. Things only get stranger when, five years later, Detective Ho Ka On (Andy On) consults Bun on a case that's baffling him.

Ho, who had briefly worked with Bun, can't determine what happened the night two policemen were involved in a dimly lit shootout. One of the cops vanished in the confusion, but his police-issue handgun is being used to commit robberies all over town. Ho suspects that the missing man's partner, Chi-wai (Lam Ka Tung), snatched the gun and is using it feloniously. But he has no proof, so he enlists Bun, who has only gotten balmier in retirement.

It turns out that Bun's gift is to glimpse the inner personality — or personalities — of other people. When Chi-wai struts down the street, the no-nonsense Ho sees only one man. But the rumpled, wildly eccentric Bun perceives seven distinct characters, including a glutton and a psychotic killer. As the viewpoint switches between Ho's and Bun's, the audience sees either one guy or a motley gang of seven. The effect is comic, but that's clearly fine with directors Johnnie To and Wai Ka-Fai, who enjoy jumbling genres.

Indeed, Mad Detective possesses elements of another Asian cinematic staple: the ghost story. Although Bun distinguishes multiple personalities, the movie doesn't dabble in the pop psychology employed by such Hollywood kitsch as The Three Faces of Eve. Bun's special vision is less psychiatric than supernatural, as evidenced by the fact that he keeps company with a person who may not actually exist.

Mad Detective isn't the ideal introduction to the work of the insanely prolific To and his sometime directing partner Wai. Last year's Exiled was darker and deeper, and 2001's Fulltime Killer was more delirious. Yet the film offers both meaty notions and flashy action sequences, as well as a winning performance by Lau, one of Cantonese-language cinema's great character actors. Neatly subverting Hong Kong's assembly-line movie machine, To and his cohorts demonstrate how a little lunacy can transform what could have been a routine cop flick.