Accessibility links
Bon Jovi's New Anthems Have A Twang Twenty-five years after its first album, the New Jersey band is still selling out Madison Square Garden and putting out chart-topping singles. But these days, its sound is a little more country, and it's recording in Nashville. That may be because pop and rock songs have left behind the working-class, everyday guy, while country music sings straight to him. 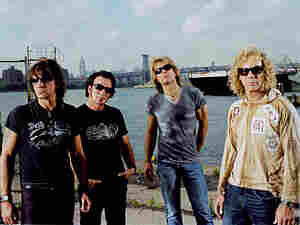 The year's highest-grossing concert tour is ending this evening at Madison Square Garden. It's capping a remarkable run for Bon Jovi, once known for teen-pleasing pop-metal anthems. This tour supports an album embraced by country fans — one that drew from the sounds of contemporary Nashville. Lost Highway's popularity probably has less to do with a change in the band's musical approach than with the changes in both rock music and country music over the course of the band's 25-year career.

It's 1983. Jon Bon Jovi is 21. He's already spent years toiling in a dying New Jersey music scene, fronting bar bands and playing high schools and VA halls. He's got a demo, but no one cares. Times are tough, but he's got dreams. It's like a Bon Jovi song.

"I went to a radio station ... WAPP the Apple, in the appropriately named Success, New York," the singer says. "This station in particular was so new that it didn't even have a receptionist yet, and that was beneficial, because I got to knock on the DJ's booth, and on a commercial break, he came out ... and he took the tape and he listened to it."

The song was "Runaway." Soon, it was in heavy rotation, and hard-working Jon Bon Jovi was on his way to mid-'80s mega-success. His music had the big guitar hooks that rock radio loved, he had the big smile that teenage girls loved, and he had the big hair that, perhaps inexplicably, much of America loved.

But Bon Jovi says that a lot of what got his band tagged with the pejorative hair-metal label, along with bands like Def Leppard and Whitesnake, stopped with the Aqua Net. He says that something distinctly Bon Jovi emerged on its 1986 album, Slippery When Wet: "We stumbled upon something that created a sound ... You compounded the big rock chorus [and] catchy sing-along kind of lyric with a story. The folks in the audience kind of became Tommy and Gina."

The huge chorus of "Living on a Prayer" helped define what Jon Bon Jovi wanted his songs to be about. He calls them "tales of optimism and hope, those universal messages that are both timeless and classic [and] have resonated with generations."

At that time, radio seemed to be filled with songs of struggle and striving in the white working class. Springsteen and John Mellencamp wrote them. Even Journey and Poison had some. Bon Jovi's optimistic anthems virtually ruled the charts for several years there. But then a Nirvana song changed things.

Grunge, with its more internal and intimate themes, swept out the bombastic pop-metal sound. Bon Jovi says that a lot of bands were suddenly falling all over themselves trying to fake their way into the new trend, but not his. "It was a very conscious decision," he says, "to not pretend to be something you were not."

Bon Jovi didn't. Later, it couldn't very well pretend to be a boy band or do a hip-hop crossover, either. And fans rewarded Bon Jovi for it by buying millions of the band's records.

Two years ago, Bon Jovi had its first hit on the country charts: a duet with Jennifer Nettles from the band Sugarland. Bon Jovi followed it up last year with an album called Lost Highway, which the group recorded in Nashville.

Country singers like Keith Urban and Kenny Chesney were already sounding a lot like Bon Jovi. John Rich is half of the band Big and Rich, who joined Bon Jovi on Lost Highway with a big, working-for-the-weekend stomper called "We Got It Going On." He points out that several songs in the country Top 40 are from pop and rock artists who've crossed over, including Jessica Simpson, The Eagles and Darius Rucker from Hootie and the Blowfish.

"I think Bon Jovi is a great American musical act," Rich says. "They're obviously known for being a rock band, but I think as they have gotten up into their 40s and have gotten married and had kids, they have a different perspective on life, and they apply their energy toward a little bit different version of what they're known for ... They become country."

For his part, Jon Bon Jovi says he has made a slightly twanged-up record, not gone country. He says he'll always be that guy from New Jersey writing and playing about Tommy from the docks and Gina from the diner, whomever they might be now, in 2008.

Next year, Bon Jovi will be eligible for the Rock and Roll Hall of Fame. He admits he'd like to get in, but he knows he's never been a critics' favorite. Still, 25 years into his career, he's still selling records, and he's got the biggest tour of the year. He'd like to think he has a shot.