Accessibility links
The Potential For A New Life Portland artist and activist damali ayo believes in recycling. Yes, it's good for the environment, but she also enjoys the challenge of finding new uses for stuff people discard. And ayo doesn't want her trash polluting someone else's backyard.

Listen
The Potential For A New Life 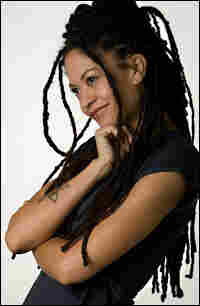 Artist and activist damali ayo is CEO of CROW clothing, a sustainable fiber clothing company that also provides resources on health and social justice. She has also worked as a radio producer, diversity trainer and writer. Ayo, who believes her name looks best in lowercase letters, lives with her dog in Portland, Ore. Photo by Pete Springer hide caption

Last summer, I looked out the door of my 100-year-old house at my newly planted garden and my adopted dog. I paused. I was overcome with appreciation. I realized nothing is trash.

I started to look around me at all the things that we ordinarily think of as trash — discarded plastic bags, water from boiled pasta, pulled weeds, rubber bands and newspapers, busted-up concrete, clothes and furniture we outgrow — and I began to think and act and live according to a belief that all things have a continued purpose in the world, if we just find it. I realized I believe in recycling.

In my neighborhood, everyone puts out their raked autumn leaves to be picked up by the city — out of sight, out of mind. This didn't fit with my newfound love of reintegrating "trash" into my life, so I mapped out a new garden with flattened moving boxes and put up a sign that said, "Dump your leaves here." I watched through the autumn as my neighbors piled their leaves on this new garden. I watered the leaves with collected rainwater, and even composted some of Stevie's doggie doo. Finally, I got topsoil from Craigslist. Now, I have a new ornamental garden.

My belief in recycling isn't trivial or novelty to me. The trash we make is often dumped in places populated by the people of color. Every piece of trash I throw away, I can feel being thrown in the backyards of the people I care most about in this world.

Nothing has to be discarded, really; if you try hard enough, everything can be reintegrated. I even use my bath water to water my garden. Gross as it might seem to my friends, I see it as potential waiting to be filled, as future heads of lettuce, tomatoes and poppies and lilies. This might seem like a big step, but if we can get down to watering our gardens with our bath water, maybe we wouldn't be so afraid of admitting our flaws, mistakes, and failings — maybe our discarded layers would be things to learn from, and ultimately turn into something better.

When I look at my dog, Stevie, I see one of the greatest joys of my life. But someone once saw her as something to be thrown away. She was abandoned and blind and found on her own in the woods. She's a wonderful dog, and when I look at her and remember what she's been through, I'm moved to tears. Maybe this is because I hope to be recycled one day, too — that someone will have the heart to see treasure in me, not just a past full of discarded relationships, but the potential for a new life, just like I do with all the things I recycle in my world. Just like those things, I sit in my metaphoric recycling bin, waiting for someone to pass by and say, "Hey, you're just what I've been looking for."