Accessibility links
Sportswriter Puts NFL Dream Into Action Millions of boys dream of playing in the NFL. Stefan Fatsis was once one of those boys. After years of working as a journalist, covering sports for The Wall Street Journal and for NPR, Fatsis got his chance to make that dream come true.

Do you have questions for Stefan Fatsis? hide caption

Millions of boys dream of playing in the National Football League. Few will realize that dream.

At the age of 43, sports journalist Stefan Fatsis finally got a chance to kick it with the big boys. He talks about his experience with the Denver Broncos and how being a player in the NFL is much different than watching it on TV as a fan.

Fatsis' book on his experience is entitled, A Few Seconds of Panic: A 5-Foot-8, 170-Pound, 43-Year-Old Sportswriter Plays in the NFL.

Excerpt: 'A Few Seconds Of Panic' 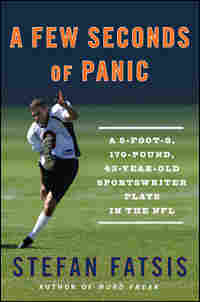 I push through a set of orange double doors. Sunlight pours onto my face. My pupils dilate. The Kentucky bluegrass is gorgeous, not a blade out of place. The yard lines and hash marks are whiter than a sheet of copy paper. Glimmering navy blue helmets dangle from the players' arms like purses. The goalposts stand like fluorescent yellow glow sticks held aloft on a pitch-black night. I've seen perfectly manicured grass and new uniforms and towering uprights before — millions upon millions of frames plastered to my brain during a lifetime of sports watching — but these images are Technicolor, high-def, hyperreal.

I'm playing in the NFL.

It is the last day of May in 2006, and the first day of a three-day "team camp" at the Paul D. Bowlen Memorial Broncos Centre, the suburban compound where the Denver Broncos train. Take away the blue and orange border on the roofline and the place could be mistaken for the headquarters of a biotech company or an aviation parts supplier or any of the other businesses in a bland stretch of office parks not far from where gold was first discovered in Colorado in 1858. I've been invited by team owner Pat Bowlen, son of the building's namesake, to join the Broncos as a kicker.

Spotting me in the locker room earlier, one player had asked another, "Which Gramatica is this one?" I think it was a joke, although it's conceivable I've been mistaken for one of the small, eccentric Gramatica brothers, the modern stereotype of the kicker as someone worthy of disdain, derision, and disgust. As in, "Get the fuck out of my locker, kicker," which is how the Broncos' veteran starting quarterback, Jake Plummer, will greet me, with a smirk, when I sit in his space one day talking to a teammate.

On the field, I stop to greet Plummer and two other quarterbacks. One is the backup, Bradlee Van Pelt, whose New York Giants linebacker father, Brad, I watched as a kid. The other is the fourth-string Preston Parsons, a "camp arm" in NFL parlance, who is needed to help execute the voluminous passes and handoffs required during the summer but who has little chance of making the team. Like most of the players I'm nervously meeting, the quarterbacks, still the cool kids they were in high school, laugh when I tell the story of how I came to be standing on the field with them rather than on the sidelines with the klatch of reporters permitted to observe the first ten minutes of practice. But the quarterbacks also seem to think the presence of a writer — at least one sanctioned by the owner — is kind of cool. Van Pelt, a barrel-chested blond with deep-set eyes, tells me he suspected I wasn't an "actual player."

Was it my Gramatica height? My sub-Gramatica weight? Or the gray hair mounting a hostile takeover of my temples? Of the ninety or so players attending the camp, not a single one was alive when Cyprus-born Armenian Garo Yepremian helped usher in the era of the weirdo soccer-style kicker with the Detroit Lions in 1966. After converting a meaningless extra point, Yepremian ran off the field with arms raised. When his teammate Alex Karras asked him what the hell he was doing, Yepremian shouted, "I keek a touchdown!" a line that would be used to denigrate a generation of kickers.

The blast of an airhorn sends the players trotting from the full-size field parallel to the main building to an adjacent full-size field. I don't know what the horn signifies, so I do what I'd planned to do: follow the kickers. There are three: punter Paul Ernster, who was drafted by the Broncos a year earlier but tore an ACL during the season; Tyler Fred-rickson, a punter and placekicker who graduated from the University of California, Berkeley, in 2004 and was cut by the Broncos last summer; and Jeff Williams, a rookie punter from a small college in Colorado. The incumbent veteran starters, placekicker Jason Elam and punter Todd Sauerbrun, aren't at this camp. They've been excused by head coach Mike Shanahan because they're incumbent veteran starters.

"How many kickers do we need?" one player shouts as we jog past.

Another spots me. "It's Martin Gramatica's dad!" he says.

When we arrive on the far field, Tyler Fredrickson helpfully explains that we're assembling to stretch before practice. The players arrange themselves in ten or twelve rows of eight or ten across. The offense, and we kickers, wear white mesh practice jerseys with navy blue numbers trimmed in orange. The defense wears blue jerseys with white numbers trimmed in orange. There seems to be some organization by position: quarterbacks near the front to the left of center, defensive backs by the right sideline, linemen toward the back of the pack. The four kickers cluster on a rear line. Facing the team is number 56, Al Wilson, the captain and starting middle linebacker. The mood is carefree, the background noise light, male chatter and laughter.

"You know they're going to call you up," Tyler says.

Huh? Call me up where?

"Welcome to training camp!" Al Wilson bellows. "Today we have a special guest — Mr. Stefan Fatsis." He says it like I'm the next contestant on American Idol. I met Wilson briefly in the locker room this morning, and he pronounces my last name correctly (the way it's spelled) but Europeanizes my first name, saying STEH-fahn instead of STEH-fi n. "He's from The Wall Street Journal! He's going to write about us! And now he's going to come up here — and break it down!"

I'm going to what? I realize that I've been summoned to stand in front of a team of professional football players, but to do what I'm not certain. Tyler nudges me forward. I bow my head to one side and smile, trying to look unflappable, jocklike, as I jog slowly up my row. Ninety heads swivel as one. Rhythmic clapping collapses into applause.

I high-five Wilson and take some initiative, restarting the synchronized clapping. The players join in, whooping and shouting at the rookie writer kicker. They are clearly amused. But clapping is also clearly not all that I'm supposed to do up here.

Growing up in a predominantly white suburb of New York City in the unhip 1970s, I was a small and insecure kid who would no sooner dance before a crowd than challenge the school bully to fight. As an adult, I graduated from the self- and genre-mocking school of dance. Now, with behemoths lined up before me like troops awaiting orders, I realize that I need to do something with the rest of my body, fast. I perform a few awkward, side-to-side steps. The players eat it up. Plummer stands directly in front of me. I ask him what to do next.

"Give us a move!" he says, his long blond hair bobbing to the beat of the clapping.

For no discernible reason — maybe my body was invaded by aliens — I leap into the air with legs and arms splayed into an X, like a cheerleader, perhaps, or a professional wrestler jumping off the ropes. My first feeling upon landing is relief to not have ruptured a ligament. Then embarrassment over what I have just done. But the performance seems to have worked: a chorus of wild applause, a sea of laughter, with me, at me, whatever. I'm relieved it's over. I high-five Plummer and every player down the line as I return to the womb of my fellow kickers.

"That was awesome," Tyler says when I return. "You're in."

Excerpted from A Few Seconds of Panic by Stefan Fatsis. Reprinted by arrangement with The Penguin Press, a member of Penguin Group (USA), Inc. Copyright (c) Stefan Fatsis, 2008.