Accessibility links
Nas' Unapologetic, Untitled Return To Form The hip-hop icon from Queensbridge has put out a conceptually brave album that works as a love letter to black America and a reclamation of a racial slur. Despite sampling himself, Biggie, and Tupac, Nas makes his untitled new album an unapologetic work of art about black American culture. 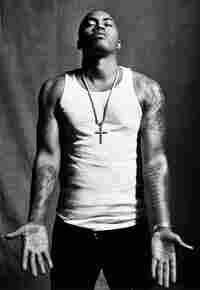 Like its predecessor, the underwhelming Hip-Hop Is Dead, Nas' new untitled record, his 9th studio album in 14 years, arrives on a wave of hype and controversy. But where his previous effort was a lazy concept record inflaming the debate about the current "state of hip-hop," Untitled remains loyal to the conceptual bravery of its original title, that familiar racial slur that permeates American race relations to this day.

The record's statement of purpose, "You Can't Stop Us Now," samples The Whatnauts' anthemic "Message to the Black Man" and features Stylistics singer Eban Brown, as well as the spoken-word performance artists in The Last Poets. Nas' political ambitions sound most grimy and magnetic on "Untitled," a track initially named for the ever-controversial Louis Farrakhan. Even the few tracks that work less explicitly as commentary, such as the celebratory adrenaline rush "Make the World Go Round" or the funky culinary tribute "Fried Chicken," work within the record's implicit framework: music from a black American, about black America. Unapologetic.

Unfortunately, the album also includes some wince-inducing disappointments. These include unlikable choruses ("Hero"), hokey beats ("Sly Fox") and even Nas' rhymes themselves ("Spit Moses' lost commandments like a gross sandwich"). Nas' awed tone on "Black President" is pitch-perfect, but a Tupac sample — "And though it seems heaven-sent, we ain't ready to see a black president," from "Changes" — provides the song's most profoundly moving moment. For all Nas' skills, he lacks the directness and emotion that made Tupac's political work so universally affecting. As a result, Untitled may never have the same cultural impact as Pac at his most political. Still, its urgent politics work as a love letter to black American culture.