Accessibility links
Deerhoof In Concert: Angular, Yet Pretty If pop music ever had a strange bedfellow, it's been in Deerhoof. Hear the forward-thinking indie-rock band perform a concert from the Wordless Music Series recorded in Brooklyn, N.Y., on June 18.

Deerhoof In Concert: Angular, Yet Pretty

See Photos from the Concert 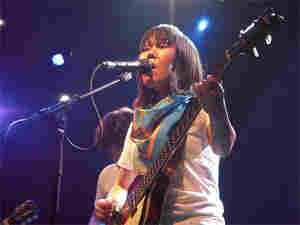 In an interview with host David Garland, Greg Saunier of the forward-thinking indie-rock band Deerhoof admits that he's been borrowing ideas from Igor Stravinsky. So it's hard to imagine a better pairing than this Wordless Music Series concert combining Deerhoof with a wild re-imagining of Stravinsky's The Rite of Spring by the Metropolis Ensemble. The unlikely playbill was recorded live by WNYC at the Prospect Park Bandshell in Brooklyn, N.Y., as part of Celebrate Brooklyn.

Now four members strong with Ed Rodriguez (formerly of Flying Luttenbachers) on guitar, Deerhoof whipped through an angular but altogether rocking set of songs, spanning from Milkman to Friend Opportunity. Melodies formed out of strange funk beats, time signatures radically shifted to confuse the dance floor, and on top of it all, Satomi Matsuzaki's cheerful voice cooed over noisy guitars. With more than 5,000 people in the audience, a wide variety of fans, including both the very young and the very young at heart, danced at the front of the stage.

In October, Deerhoof will release its ninth studio album, Offend Maggie, just one year after the excellent Friend Opportunity. In fact, the band has almost consistently released one album per year since 2001's Halfbird. But much has changed since then: Deerhoof has gone through lineup changes and, most significantly, has streamlined its song structures. That's not to say that Deerhoof isn't still weird — it might be stranger than ever — but the group has found more remarkable ways to concentrate its eccentricities into two- and three-minute pop songs.

Per Deerhoof's request, "Fresh Born," "Numina," "Basket Ball Get Your Groove Back," and "The Tears and Music of Love" have been edited out of the concert audio.