Warning: getimagesize(https://media.npr.org/books/summer/2008/kgb/books_75-9ca11109e373cdc41fed976fb473cc8f1fc67987.jpg): failed to open stream: HTTP request failed! HTTP/1.0 404 Not Found in /var/www/html/src/Views/CommonJsonldView.php on line 87
 Sifting Through Summer, Page By Page : NPR
Accessibility links
Sifting Through Summer, Page By Page The last summer holiday, Labor Day, is fast approaching and Karen Grigsby Bates is planning to use the weekend to kick back and catch up on some summer reading.

Sifting Through Summer, Page By Page

Sifting Through Summer, Page By Page 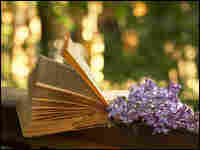 The last summer holiday, Labor Day, is fast approaching and I'm planning to use the weekend to kick back and catch up on some reading.

Mostly I'll crack open travel books, because unless the dollar gets very strong very quickly, I won't be visiting Europe anytime soon. (But reading these books, I can always dream!) There are also a couple of cookbooks in the mix, because while the days are still warm and long, the grill is calling my name. And it wouldn't be summer — even the tail-end of summer — without a few good mysteries, right? So grab a cold drink, find a comfy chair by an open window and immerse yourself until it's too dark to read any more. 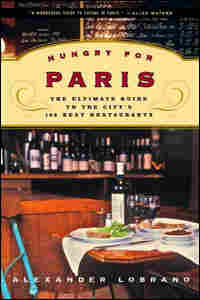 Hungry For Paris: The Ultimate Guide to the City's 102 Best Restaurants, by Alexander Lobrano, paperback, 464 pages

As the Paris-based European correspondent for Gourmet magazine, Lobrano has eaten his way through the city's best places (not all of them are bank-breakers). He's constantly being asked, "Where should I go eat when I'm in Paris?" Ask no more: Lobrano has compiled his considerable wisdom in one packable book.

If you're in Paris, Lobrano advises avoiding expensive tourist clichés. Of Maxim's, he writes: "Just say no. The Belle Epoque décor is the only appetizing thing left of this world-famous tourist trap." Ouch! But don't you want to know that before you spend all those euros on aperitifs? If you're like me and can't afford the city of lights, you'll still get vicarious satisfaction from Hungry. 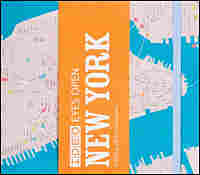 The Eyes Open guides (so far there are two of them) want you to consider places you think you know in a different way. Instead of dividing their square, spiral-ringed guides into neighborhoods, it divides them into categories, because — as the front of the books say — "each one of us is an OBSERVER, a DINER, a SHOPPER and a MINGLER."

The Observer feature in New York offers, among other things, MetroNaps — nap pods in the Empire State Building, where you can crash in state-of-the-art bliss for a half-hour. London Observers can hit the Hackney City Farm, which is exactly what it says it is: "a small community organic farm in the middle of the city." Treats made from the residents' eggs are available in the gift shop. Who knew? 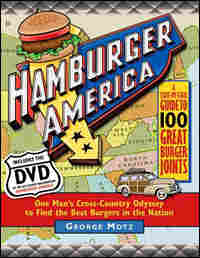 One man. 100 burger joints. 48 states in the continental U.S. Not a chain among them. George Motz chronicles his drive across country in search of the best burgers the nation has to offer in this book that is as much a love letter to America as it is a paean to its signature hot sandwich.

Even if don't you eat red meat, even if you never get to the Meers Store and Restaurant on Highway 115 in Meers, Okla., you'll be glad to meet people like proprietor Joe Meers. Meers lets his longhorn cattle roam free before he turns them into burgers because he believes "happy cows taste better." 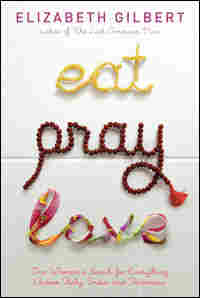 I tried like crazy not to read this memoir when it first came out — I figured that since Elizabeth Gilbert had already spent time on Oprah and the nation's best-seller lists, she didn't need my help. I gave away two copies of Eat, Pray, Love before I finally broke down and peeled back the cover.

The first few chapters didn't reach out and grab me, but by the time Gilbert had shed house, husband and somebody else's dream of an ideal life to travel the world for a year in search of her spiritual self, I was hooked. This really is as much travelogue and culinary investigation as it is a chronicle of one woman's quest to find her spiritual center. By the end, I wish I hadn't read it so I could introduce myself to Gilbert's quest all over again.

'Fish Without a Doubt' 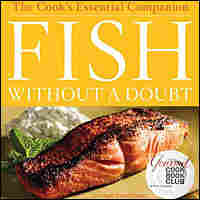 Fish Without A Doubt, by Rick Moonen and Roy Finamore, hardcover, 448 pages

Don't eat as much fish as you think you should because you don't know how to cook it? This book is for you. Rick Moonen and Roy Finamore have given us 250 delectable fish recipes divided into several cooking categories, including baking, roasting, grilling and poaching.

Moonen is a chef who owns two seafood restaurants, and he takes care to point out how to choose fish with an eye toward environmental responsibility. He lists all manner of fish in the first chapter, along with information on how to cook each and what you can use as a substitute. And to make sure we home cooks can carry off his recipes, Moonen uses co-author Finamore's teeny New York kitchen (equipped with one four-burner stove and pots and pans that regular people use) to test his recipes. To channel Frank: If you can make it there, you'll make it anywhere. 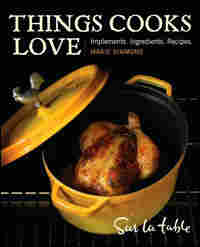 Even if you're a good cook, you've probably let the food mill Aunt Hattie gave you for your anniversary gather dust on a high shelf in the kitchen, because, uhhh, what do you make with a food mill, anyway? Well, start unpacking your closets, because the gourmet emporium Sur La Table has amassed scores of tempting recipes that use all sorts of mysterious kitchen equipment — food mills, terra-cotta tangines and pastry combs included — to vary your menu and broaden your skills. So get out your cassoulet pot — this book offers recipes and instructions, plus photos that will inspire you. 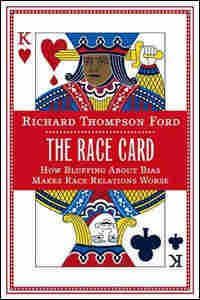 Using anecdotes and no-nonsense analysis, Stanford Law professor Richard Thompson Ford examines why the post-civil rights environment is so complicated and contentious. He looks at brewing racial clashes over common resources in such areas as housing and education — an interesting exercise when so much public attention has focused on, for instance, whether Barack Obama can pull Latino votes — and gives readers plenty to think about as the presidential discussions become increasingly pointed and race becomes an unspoken part of the candidates' speeches. 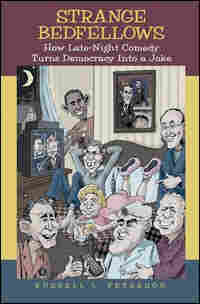 More and more prominent politicians (and political wannabes) are making sure they make appearances on Saturday Night Live as well as the Sunday morning political talk shows. According to Russell Peterson, a professor of American studies at the University of Iowa, that's both a good thing — you get to see your candidate in a less formal setting — and a bad one. Peterson was a stand-up comedian before he became an academic, so he knows both sides of this coin. 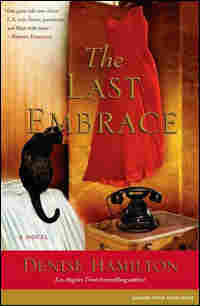 A departure from Denise Hamilton's highly recommended Eve Diamond mystery series, The Last Embrace is a stand-alone book set in post-war Los Angeles. Its heroine, Lily Kessler, has reluctantly come to the city to help find the missing sister of her late fiance. Lily is uniquely equipped to do this: She's a former spy for the OSS, the precursor to the CIA. Lily's search takes her through old Los Angeles and breathes life into now-vanished city landmarks. Lost parts of the city that were once integral to it — like its trolley system — come to life under Hamilton's pen. 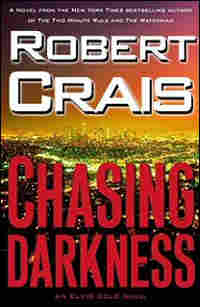 Chasing Darkness is the latest in Robert Crais' series of novels featuring the much-loved private investigator Elvis Cole, a wryly wary guy who's never met a wisecrack he didn't like. In this 11th book, Elvis is older, more weary and a little darker. Darkness opens with one of Cole's old murder cases coming back to haunt him: Could the World's Greatest Detective (Cole's facetious description of himself) actually be responsible for springing a murder suspect who went on to kill twice more?

Cole's insistence on finding out the answer takes him from the high-rises of downtown Los Angeles to the meth-plagued trailer parks in the desert suburbs. Crais' brilliant descriptions of modern L.A. — its ills and inequities — will be taught in early 21st century literature classes not too long from now. 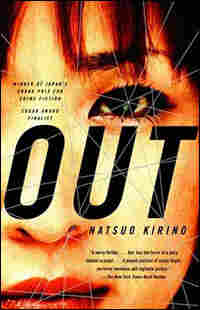 Out, by Natsuo Kirino, paperback, 415 pages

One review says this novel is "not for the faint of heart" — and it's not for the faint of stomach, either. So here's my warning: Don't read this at lunch. And here's the storyline: Four Tokyo housewives work the night shift in a food-preparation facility. They each have their own domestic dramas to contend with, but when one, a young mother of two, murders her abusive husband, the four co-workers band together to hide the evidence in the factory's signature curry lunch boxes.


Natsuo Kirino shows us the modern Japan few tourists get to see in this fast-moving tale that is as violent as it is engrossing. I guarantee you'll never look at the grout in your bathroom tile the same way again.

Books For Children Of All Ages 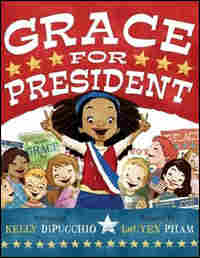 When her elementary class studies presidential politics, Grace is shocked to discover that in all of America's almost 250 years, there's never been a woman in office: "No woman president? Ever?" she asks incredulously.


Knowing an opportunity when she sees one, Grace's teacher decides to have an election for classroom president. Grace — who is not only a girl, but also black — seems like the inevitable winner, until the boys in her class recruit a ringer from another classroom to run against her.


Kelly DiPucchio's treatment of Grace's quest makes our nation's sometimes-bizarre electoral politics more understandable, and LeUyen Pham's cheerful illustrations are better than therapy. Let's just say Sens. Clinton and Obama — and their fractious supporters — could have benefited from reading this.