Accessibility links
The Joker: Torn Between Goof And Evil When the movie The Dark Knight opens Thursday, thousands of people will be haunted by the late Heath Ledger's portrayal of The Joker. Batman's arch-nemesis has not always been such a menacing, sadistic fellow, however.

Listen
The Joker: Torn Between Goof And Evil

Who was the best Joker of all? 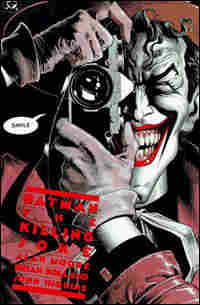 In the 1988 comic book The Killing Joke, The Joker is a chemical engineer who quit his job to become a stand-up comedian. He fails miserably, which leaves him very bitter. Courtesy Amazon.com hide caption 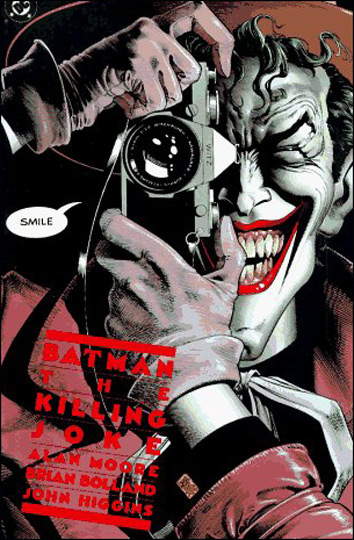 In the 1988 comic book The Killing Joke, The Joker is a chemical engineer who quit his job to become a stand-up comedian. He fails miserably, which leaves him very bitter. 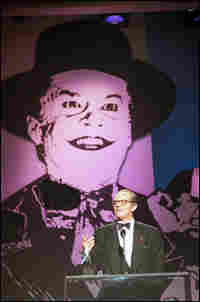 Jack Nicholson helped take The Joker back to the sadistically dark side in 1989. Lois Bernstein/AP Photo hide caption 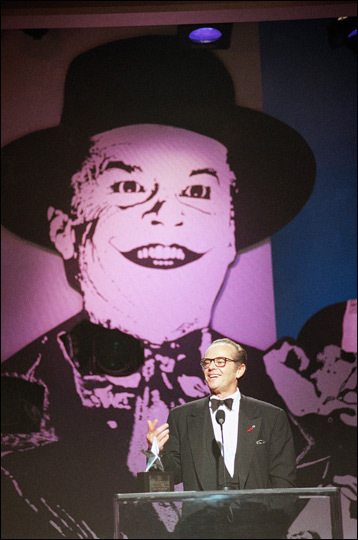 Jack Nicholson helped take The Joker back to the sadistically dark side in 1989. 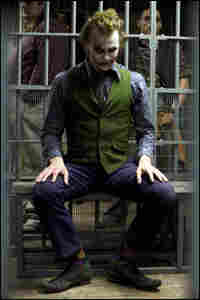 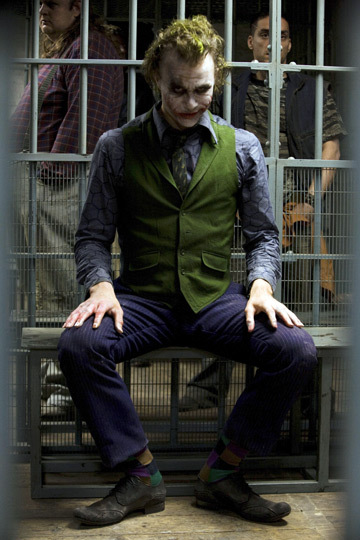 When the movie The Dark Knight opens Thursday at midnight, thousands of people will be haunted by the late Heath Ledger's portrayal of The Joker.

Before he died, Ledger told reporters that it took a ton of energy to play the role, but that it was the most fun he ever had.

"It was one of those moments where I was asked if I'd be interested in playing The Joker, and I knew five seconds later exactly how to play it," he said.

His "how" differed significantly from some of The Joker's earlier incarnations. In his nearly 70 years of existence, that "Clown Prince of Crime," that "Harlequin of Hate," has taken a wild ride between the forces of goofy and evil.

Joker was born 68 years ago, on the pages of the comic book Batman #1, as simply a bit role. His creators at DC Comics killed him off after only two appearances.

Only after he was on the way to fictional hell (or wherever evil comic-book characters go when they die), an editor at DC Comics said, "Wait a minute — this guy is pretty good!" And they decided to revive him.

"They added a panel at the end of the story where, in the ambulance, the doctor goes, 'Well I'm amazed this guy's actually going to live!'" says comic book writer Steve Englehart.

After that, he was a regular character.

Over the years, there have been many interpretations of The Joker's origins. Most stories involve an ordinary crook who falls into a vat of chemicals while running away from Batman. When the criminal emerges, his hair is bright green, his face ghostly white, and his fiercely red lips are frozen in a clownish grin.

Englehart says that look was originally inspired by the 1928 silent movie, The Man Who Laughs.

"The makeup is precisely what you think of as The Joker, so they just stole it cold. I think in the '40s in comic books, nobody much worried about things like that."

Back then, The Joker was a pretty straightforward psychopath who stole things and killed people. His main motivation in life was messing with Batman.

"He sees The Batman as his perfect other," says Englehart. "And The Joker doesn't want to kill The Batman, because then he wouldn't have a Batman to play with."

The Forces Of Goof

In the 1950s, the character went through a metamorphosis when a group called the Comics Code Authority was created in response to what some deemed "inappropriate material." When censors banned "excessive violence" from comic books, The Joker became less dark and a lot more silly. That goofy thieving trickster version of the villain jumped out of comic books and onto TV in 1966, when ABC launched its version of Batman.

Actor Cesar Romero's Joker sported a Technicolor purple suit and looked like a villainous Liberace. Romero laughed more than he ever spoke, and when he did talk, he was feverishly fond of alliteration; sentences like, "Oh, my playful pilfering pals, how delicious it is."

During the '60s, The Joker was mostly absent from Batman comic books. In the '70s, he had a big comeback with several writers, including Englehart, who says he had no interest in the family-friendly, goofy Joker. He wanted to take the character back to his roots.

"He was this very crazy, scary character. I really wanted to get back to the idea of Batman fighting insane murderers at 3 a.m. under the full moon, as the clouds scuttled by."

Englehart 's much darker interpretation of The Joker later became part of the inspiration for Jack Nicholson's portrayal in Tim Burton's 1989 film, Batman.

In a promotional video for the film, Nicholson said he's often told in real life that he oversteps the boundaries of good humor. But Nicholson added, he doesn't have anything on The Joker.

"Things that even the wildest comics would be afraid to find funny, burning somebody's face into oblivion, destroying a masterpiece in a museum — not this character, and I love that," he said.

Humor has always been a pivotal part of The Joker, and though we usually think of humor as an enjoyable, likeable trait, it can also be tinged with evil says Paul Levitz, president and publisher of DC Comics.

"There's a level in humor, where humor can verge on being offensive or invasive of your space or your life — where you don't quite know what's going on. Is this guy putting me on? Is he actually going to do those things to me?"

In the 1988 DC Comics book Batman: The Killing Joke, the man who eventually becomes Batman's archenemy starts off as a chemical engineer who quits his job to become a stand-up comedian. He fails miserably.

"Yeah, I could see someone getting really crazy off of that," says Maz Jobrani, a real-life stand-up comic. "A lot of times, comics will then get upset at the audience for not understanding them, and they go, 'You don't understand me, I'm funny, you people are horrible, you people should go to hell!'"

Jobrani adds that many comics, like The Joker, are a little bit crazy — and it's their peculiar worldview that makes them funny.

In his interpretation of The Joker in the new film, The Dark Knight, actor Heath Ledger thrives on that insanity.

"I keep coming back to the way he physically incarnates madness," says Levitz. "Leave the makeup aside, leave the costuming aside — if you had Heath Ledger in plain clothes, who's a very handsome, well-presented, very affable looking man — if he walked in a room and started acting in the behaviors that he uses for The Joker, you'd get the hell out of that room fast. And that's pretty cool."

Ledger's Joker may be enthralling for viewers, but playing the role took its toll.

The Australian actor told reporters that he barely slept while playing the part. Even when his body was exhausted, he couldn't stop his mind from reeling, he said.

The challenge of the role wasn't lost on Jack Nicholson. When told of Ledger's death, the actor's immediate response was: "I warned him."

Batman: Present At The Creation
Catwoman: Feminine Power, on the Prowl March 16, 2008