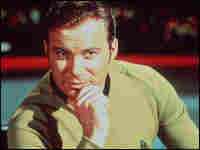 Fans of the world, unite: You have nothing to lose but your fear of legal claims.

That was the idea behind the formation of the Organization for Transformative Works, a group of writers and supporters of fan fiction — writings in which book, movie or TV characters are imagined by fans in all sorts of stories that go beyond those of their original creators.

Some fans put Harry Potter, Captain Kirk or Darth Vader in new situations. And, of course, many put their favorite fictional creations in bizarre sexual or gender-bending adventures. Then there are the fan writers who actually take characters out of adventures and imagine what they'd be like in boring domestic settings, doing the things all of us do each day.

That's where Rebecca Tushnet comes in. She's a law professor at Georgetown University — and also a writer of fan fiction herself — who is one of the founders of the Organization for Transformative Works. "What if the hundreds of thousands of fan-created stories, videos and images were celebrated, instead of half-hidden?" the group asks on its Web site. "What if fans had access to an online archive that wouldn't back down at the merest hint of a lawsuit or change policies at the whim of an advertiser?"

Tushnet has written her own X-Files, Buffy and Smallville stories, and she's also represented fans in copyright disputes. "Basically, it's our aim on the legal front to make clear that the law allows for fair use of copyrighted works, including fan fiction," she says. But she argues that because copyright law is "fuzzy," misconceptions abound on all sides. She says it's her mission "to assure fans that they're doing something OK and to assure copyright owners that they're not in danger from fans."

In fact, she argues that many artists see the value in fan sites and view going after them as counterproductive: "It's not that great an idea in terms of relations with your fans, who want to be engaged and who want to support you," Tushnet says.