Accessibility links
Candidates Split On Homeland Security Spending For John McCain, the best way to stop another domestic terrorist attack is to prevent al-Qaida from gaining a foothold in Iraq and Afghanistan. Barack Obama thinks money spent on Iraq would be better spent on domestic infrastructure to make the U.S. stronger if another attack comes.

McCain and Obama haven't spoken much about homeland security on the campaign trail. The head of the Homeland Security Program at the Center for Strategic and International Studies, David Heyman, says neither has offered detailed plans for closing security gaps at the nation's airports, train stations and elsewhere.

Where the candidates differ, so far, is on where the country should focus its efforts to prevent another domestic terrorist attack.

Obama: Obama has pushed to spend more money boosting security domestically, including improving the nation's infrastructure. He wants to target homeland security dollars to the cities that face the greatest risk of attack, and would also impose tougher restrictions on chemical plants.

The USCGC Tern patrols near the San Francisco Bay Bridge May 23, 2003 near San Francisco. If Obama were elected, he has said he would devote more homeland security money to U.S. cities that face the greatest risk of attack. Justin Sullivan/Getty Images hide caption 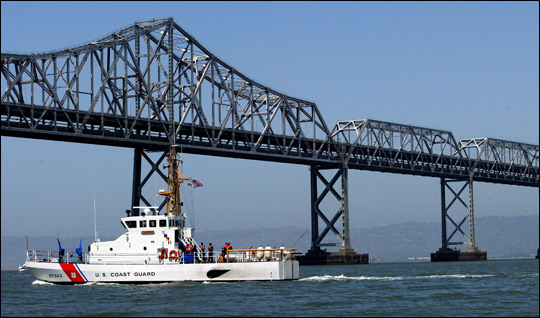 The USCGC Tern patrols near the San Francisco Bay Bridge May 23, 2003 near San Francisco. If Obama were elected, he has said he would devote more homeland security money to U.S. cities that face the greatest risk of attack.

U.S. soldiers secure the area at a new installed check-point at Babadag training facility in on July 14, 2008. If McCain were elected, he has said that would focus on the terroist threats overseas to help prevent another domestic attack. Daniel Mihailescu/AFP/Getty Images hide caption 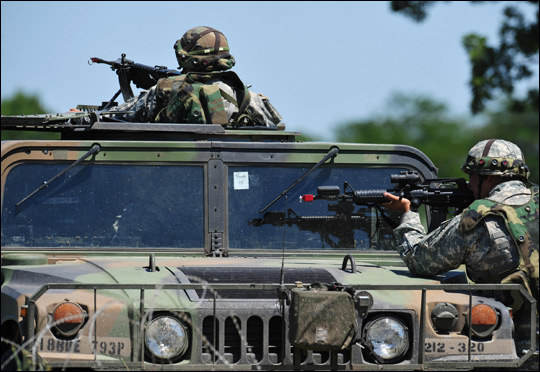 U.S. soldiers secure the area at a new installed check-point at Babadag training facility in on July 14, 2008. If McCain were elected, he has said that would focus on the terroist threats overseas to help prevent another domestic attack.

Tom Ridge: Nation's first Secretary of Homeland Security. He headed the agency from its creation in 2003 until 2005, and is also a former Republican congressman and governor of Pennsylvania. Ridge has been a strong proponent of Bush administration policies.

Robert Bonner: Former Customs commissioner during the Bush administration — he was the first person to hold the job after the Sept. 11 attacks. He helped implement new security measures at the nation's ports and efforts to screen cargo entering the United States.

Joseph Lieberman: A former Democrat and now independent from Connecticut who chairs the Senate Homeland Security Committee. He worked with McCain to establish an independent commission to investigate the Sept. 11 attacks and to implement the commission's recommendations. He authored the bill creating the Department of Homeland Security Department.

Richard Clarke: Former adviser to several presidents on national security and counterterrorism issues. Clarke was working in the White House on Sept. 11 and helped to coordinate the federal response. He later became an outspoken critic of Bush administration policies before and after the attack.

Stephen Flynn: A senior fellow at the Council on Foreign Relations, who served in the Coast Guard for 20 years. Flynn has written extensively on homeland security, especially on the need for the country to bounce back quickly from a terrorist attack, to minimize the impact.

James Lee Witt: Headed the Federal Emergency Management Agency under President Clinton. He's a strong proponent of taking FEMA out of the Department of Homeland Security and making it a stand-alone agency, as it once was.

Hovering over the next administration is the possibility of another domestic terrorist attack, but the issue of homeland security has received surprisingly little attention on the presidential campaign trail.

The only time the prospect of another attack made campaign headlines was when Charles Black, a senior adviser to Arizona Sen. John McCain, said an attack would "be a big advantage" politically for his candidate. McCain couldn't distance himself from the remarks fast enough.

"I cannot imagine why he would say it," McCain said. "It's not true. I've worked tirelessly since 9/11 to prevent another attack on the United States of America."

McCain noted that, among other things, he was one of the main proponents of an independent commission to investigate the Sept. 11, 2001, attack to help avoid similar attacks in the future.

His opponent, Democratic Illinois Sen. Barack Obama, responded to Black's comments by saying that this was an issue that should transcend politics — although Obama said he'd be happy to debate who would be the stronger president when it comes to protecting the country.

That debate — at least as it relates to homeland security — has yet to occur.

"What's so surprising and remarkable to me is how much homeland security has not played in the discussion," says David Heyman, who heads the Homeland Security Program at the Center for Strategic and International Studies.

Heyman says neither candidate has offered detailed plans for closing security gaps at the nation's airports, train stations and elsewhere. "We don't have control over our border. We're not prepared for known biological attacks," he says, adding that no one really knows yet how best to secure cargo entering the nation's ports. And, he says, the candidates' overall philosophies, when it comes to homeland security, are unclear.

Heyman says these things are important because, while Americans seem to be worrying less about an attack, most security experts think the threat is as great as ever.

McCain's senior policy adviser on the campaign is Douglas Holtz-Eakin. He says the Republican senator thinks the best way to prevent another attack is to stop al-Qaida from getting a foothold in Iraq and Afghanistan. "His homeland security policy right now is thoroughly intertwined with his understanding that we have to be successful in Iraq," Holtz-Eakin says.

He acknowledges that the campaign doesn't mention homeland security as a major issue on its Web site, but he says McCain has a strong record on the issue.

"He was one of the leaders in the effort to clear the digital spectrum so that we could have first responders that could communicate with one another," Holtz-Eakin says, noting that that was a problem both during the Sept. 11 attacks and in the government's response to Hurricane Katrina.

McCain has also pushed for tighter border security, including more spending on technology and border patrol agents to stop illegal crossings. He's become especially outspoken on the issue after it became clear that better border security would be a political prerequisite for getting his immigration reform proposals enacted.

"Maybe we don't call that a homeland security initiative, but it's obviously an important accomplishment in that regard," says Holtz-Eakin.

McCain has also said if there's another Katrina-like disaster, he'll use the private sector as a model to make sure emergency supplies get where they're needed.

Obama agrees with McCain that the government's response to Hurricane Katrina was one of the Bush administration's greatest failures. In his administration, Obama says, the FEMA director would report directly to him. The Illinois senator would also prefer that the emergency management agency be removed from the Homeland Security Department, where critics say it has been weakened.

Stephen Flynn, a senior fellow at the Council on Foreign Relations, is an unpaid adviser to the Obama campaign. He says the biggest difference between the candidates is that Obama thinks the money spent on Iraq would be better spent domestically — on bridges, power grids and other critical infrastructure — so the country is better able to withstand another attack.

"The more brittle we are as a society — as, unfortunately, the poor citizens of New Orleans learned — the more consequential disasters, whether they be manmade or natural, are going to be," says Flynn.

Obama has pushed to target homeland security funds at cities that face the greatest risk of attack and to impose tougher restrictions on chemical plants. He also thinks all Americans should share in the burden of protecting the nation, a topic he raised in a speech last year in Washington, D.C.

"Too often, this administration's approach to homeland security has been to scatter money around and avoid hard choices, or to scare Americans without telling them what to be scared of or what to do," Obama said. He added that, if elected, he'll share threat information with the public and with local officials.

Unlike McCain, Obama has a whole section on his campaign Web site devoted to homeland security.

Still, the differences between the candidates are not that clear-cut. It could come down to who voters think would be the best manager to prepare for another disaster and the best leader, should one occur.