Accessibility links
Struggling In Ohio As The Economy Tightens Gloria Nunez grew up in a middle-class family, but at 40, she's struggling to keep herself and her 19-year-old daughter afloat. She's not alone. In a recent poll, nearly one-third of low-income respondents in Ohio say paying for food is a serious problem.

Listen
Struggling In Ohio As The Economy Tightens 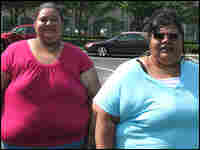 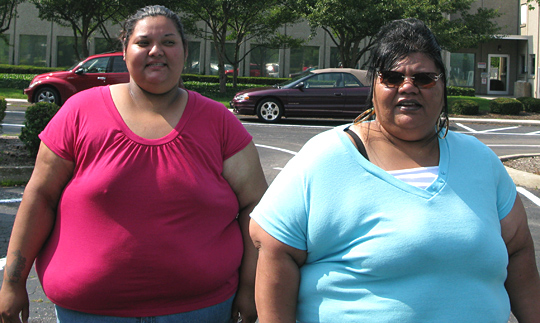 Want to read more information on the Nunezes' household budget and learn about budget cuts they've made? Click here.

Graphic: Ohioans at all income levels are having economic woes.

Read the full results of the poll by NPR, the Kaiser Family Foundation and the Harvard School of Public Health:

An NPR series uses new poll findings to explore what people mean when they say the economy is bad. Read an overview of the series.

A generation ago, the livelihood of Gloria Nunez's family was built on cars.

Her father worked at General Motors for 45 years before retiring. Her mother taught driver's education. Nunez and her six siblings grew up middle class.

Things have changed considerably for this Ohio family.

Nunez's van broke down last fall. Now, her 19-year-old daughter has no reliable transportation out of their subsidized housing complex in Fostoria, 40 miles south of Toledo, to look for a job.

Nunez and most of her siblings and their spouses are unemployed and rely on government assistance and food stamps. Some have part-time jobs, but working is made more difficult with no car or public transportation.

Low-income families in Ohio say they are particularly hard-hit by the changes in the economy, according to a new poll conducted by NPR, The Kaiser Family Foundation and Harvard School of Public Health. Two-thirds of lower-income respondents, or 66 percent, say paying for gas is a serious problem because of recent changes in the economy. Nearly half of low-income Ohioans, or 47 percent, say that getting a well-paying job or a raise in pay is also major problem.

Nunez, 40, has never worked and has no high school degree. She says a car accident 17 years ago left her depressed and disabled, incapable of getting a job. Instead, she and her daughter, Angelica Hernandez, survive on a $637 Social Security check and $102 in food stamps.

Hernandez received her high school diploma and has had several jobs in recent years. But now, because fewer restaurants and stores are hiring, she says she finds it hard to find a job. Even if she could, she says it's particularly hard to imagine how she'll keep it. She says she needs someone to give her a lift just to get to an interview. And with gas prices so high, she's not sure she could afford to pay someone to drive her to work every day.

People tell Nunez her daughter could get more money in public assistance if she had a child.

"A lot of people have told me, 'Why don't your daughter have a kid?'"

They both reject that as a plan.

Hernandez says she's trying to get training to be a nurse's assistant, but without her own set of wheels or enough money to pay others for gas, it hasn't been easy.

'What's Going To Happen To Us?'

Most of their extended family lives in the same townhouse complex. The only employer within walking distance is a ThyssenKrupp factory that makes diesel engine parts. That facility, which employs 400 people, is shutting down and moving to Illinois next year.

The only one with a car is Irma Hernandez, Nunez's mother. Hernandez says that with a teenage son still at home, the cost of feeding him and sending him to school is rising, and she can no longer pay for the car.

"I'm about to lose my car," she says on her way to pick up one of her daughters to take her to Toledo. "So then what's going to happen to us?"

So Nunez and her daughter are mostly stuck at home.

The rising cost of food means their money gets them about a third fewer bags of groceries — $100 used to buy about 12 bags of groceries, but now it's more like seven or eight. So they cut back on expensive items like meat, and they don't buy extras like ice cream anymore. Instead, they eat a lot of starches like potatoes and noodles.