Accessibility links
Remembering The Berlin Airlift, 60 Years Later Members of the Berlin Airlift, the military operation that brought food, supplies and goods to West Berlin during the blockade by Moscow in 1948, were honored at the 60th anniversary ceremony in Germany. 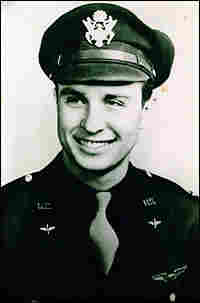 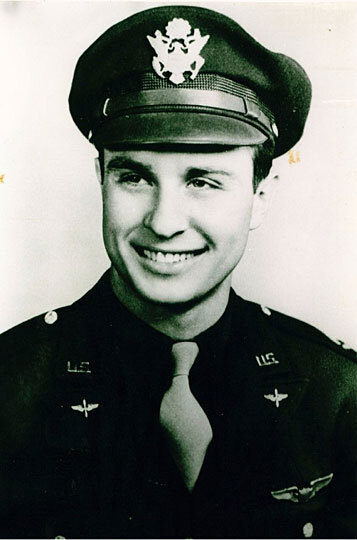 Captain William R. Howard left a young wife and 8-month-old baby behind when his plane went down in bad weather. 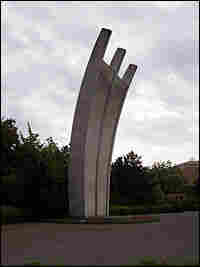 Located at Berlin's Tempelhof airport, the airlift memorial has been nicknamed the "Hunger Rake" by Berliners. The three prongs at the top represent the three air corridors the pilots flew. Khue Pham hide caption 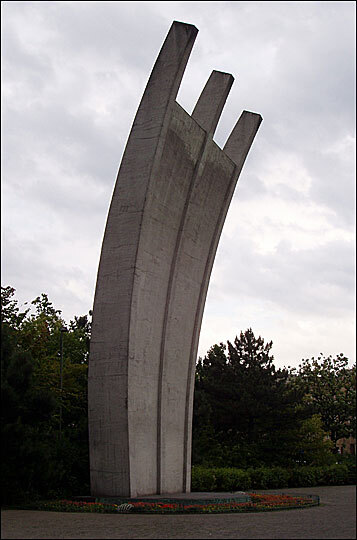 Located at Berlin's Tempelhof airport, the airlift memorial has been nicknamed the "Hunger Rake" by Berliners. The three prongs at the top represent the three air corridors the pilots flew.

This summer marked the 60th anniversary of the Allies' airlift of food and medicine into West Berlin in East Germany, an attempt to avert a potential crisis from a blockade by the Soviet Union.

The first major standoff of the Cold War began on June 24, 1948, when the Soviet Union cut off all road, rail and water connections to West Berlin. Moscow hoped that the blockade, by starving this city in the middle of the Soviet-controlled part of Germany, would force the Allies to abandon it.

Two days later, Operation Vittles began, and American and British cargo planes hauling milk, flour and medicine began flying in from West Germany. The 15-month airlift was lauded as a great humanitarian and political success, but there were also human costs to the operation.

"Our enemies who had once dropped bombs on us were now bringing us food and coal to heat our homes with," says Berlin resident Erika Demitrowitz, who was 24 when the airlift began. "I can remember the day the airlift was over — we picked all the flowers we could and took them to the Americans. That was our thank you."

When the airlift ended on Sept. 30, 1949, more than 2 million tons of food, coal and other provisions had been flown into West Berlin. The Soviets gave up their blockade, and West Berlin remained a democratic island behind the Iron Curtain until the fall of the Berlin Wall.

'Freedom Is Not Free'

At a recent 60th-anniversary ceremony at Berlin's Tempelhof airport, the center of the airlift operation, a band played "The Star Spangled Banner" while one of the DC-3 planes used in the airlift circled overhead.

Veterans in their late 70s and 80s sat next to a 65-foot-tall concrete sculpture commemorating the airlift. Three curved prongs at the top of the memorial symbolize the air corridors that pilots flew during the operation, and the names of about 70 servicemen who lost their lives during the airlift are inscribed on the base.

"Their ultimate sacrifice is yet another example that freedom is not free," said Gen. Roger Brady, the commander of U.S. air forces in Europe. "In fact, sometimes it comes at a great cost."

Eleanor Howard of Valdosta, Ga., knows this all too well. In the main hall at Tempelhof, she chatted with other veterans and their wives whom she accompanied to Germany. She remembered her husband, Capt. William R. Howard, who flew in the airlift.

"Bill was such a fine Christian man, and so good looking!" Howard said.

Capt. Howard's plane went down in bad weather while coming back from a delivery to West Berlin on Aug. 24, 1948. Eleanor was waiting at home on the base for him with their 8-month-old son, William Riley Jr., wondering why her husband was late.

She said at one point she looked out her window and saw what every military spouse or parent dreads.

"I saw the base commander come riding up and I saw the base chaplain and I literally turned to stone," Howard said. "I knew something had happened. And so I opened the door to a sea of sad faces and they told me Bill was gone."

Remembering Those Who Sacrificed

Thirty-one Americans lost their lives in the airlift, as did 39 British and nine Germans.

Capt. Howard's son, Riley, was with his mother in Berlin. Though he never really knew his dad, he said he is extremely proud of what his father and the other airlift pilots accomplished.

"They knew this was a sacrifice," Riley Howard said. "They took it on with that idea, that ideal to help other people that were in need. That's why that generation was considered the greatest generation."

Many Germans share that sentiment — and the emotional tie between Germany and America is still strong, despite recent differences over U.S. foreign policy.

American pilots also dropped chocolate to Berlin children during the airlift, and Gail Halverson was one of the first "candy bombers."

"We only worked for them for a few months, and for 59 years they've been spoiling us with gratitude," Halverson said. "It's incredible."