Accessibility links
Rhett Miller: 'Serial Ladykiller,' Lovelorn Crooner The best little bar-band in Texas is back with more ballads of heartache and anthems for getting over it. The Old 97's have just released Blame It On Gravity. Front-man Rhett Miller joins Fresh Air to talk about the recording and to perform some new songs. 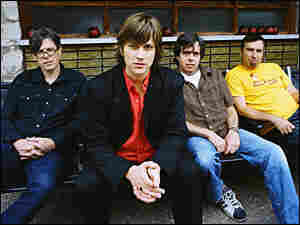 The influences of the Old 97's are as diverse as Johnny Cash, David Bowie, and the Pixies. Lisa Johnson hide caption

Alt-country favorites the Old 97's are as reliable as a worn pair of cowboy boots and an old flannel shirt. The band has been playing for 15 years now, and they just released the album Blame It On Gravity.

Guitarist and vocalist Rhett Miller takes a break from their summer tour to talk about the group's new album and the band's career. Miller also performs some new songs and a few old hits.

In addition to playing in the Old 97's, Miller has a successful solo career, having released three albums. His most recent recording, The Believer, was well-received by critics. 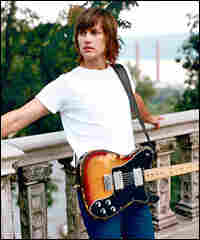 Rhett Miller ought to be a household name by now: With model-esque good looks, considerable stage presence, and an arsenal of catchy pop songs, the charismatic frontman for alt-country favorite Old 97's doesn't want for raw materials.

Always seemingly on the brink of a commercial breakout, Miller has taken to alternating albums by his main band with more overtly pop-friendly solo projects. He's just released arguably his most commercially accessible disc, The Believer, and "Question" closes the album with a sweet slice-of-life sketch detailing a marriage proposal. Short on grand gestures and free of diamond rings, the song instead finds drama in subtler emotions and interactions, before magnifying the moment's importance in the chorus.

An earlier incarnation of the song -- with just Miller and an acoustic guitar, as opposed to the longer, dreamier, more fleshed-out version here -- appears on 2001's excellent Old 97's album Satellite Rides. Fans may debate which they prefer, but both sound endlessly suitable for wedding-themed mix CDs the world over.