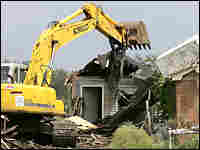 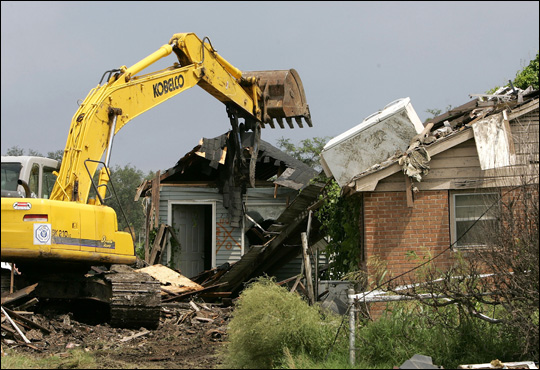 Workers use an excavator to destroy a flood-damaged home in New Orleans' Lower Ninth Ward in 2006.

Saturday is the last day New Orleans homeowners without insurance can apply for free demolition through FEMA. The city wants people to have the federal government pay now for demolition, rather than have the city or individual homeowners foot the bill later.

While demolition represents a clean slate to some, others feel pressured to level houses they're not yet ready to let go of.

There are 15,000 buildings that the city says must be demolished for public safety reasons. That's just in New Orleans. To many whose homes were devastated, demolition brings more peace of mind than holding onto a house that they can't afford to fix.

"It just eliminates a really heavy burden," said Laureen Lentz, who works with a group called Squandered Heritage that monitors demolitions in the city.

"That way they can be in Houston, or wherever they are, with the rest of their family," she said. "[And] they won't have the liability of a house that is dangerous or could get burned down."

But Lentz also says that many people don't think about how they'll keep the grass cut, or keep trash off their newly vacant lot. And she says many don't realize a gutted and boarded up house is usually worth more than no house at all.

"There are steps between total obliteration of a house and a health hazard," Gadbois said. "If there's nothing for animals or people to nest in, they won't nest in it. [You can] clean it [and] put it into dry storage, so to speak."

Gadbois says that the state's Road Home program would pay for clean up, ideally. But the money's coming too slow. And she says demolition has both psychological and financial appeal.

Some people just don't have much of a choice about the issue. Henry Gurley has waited for Road Home money to start major work on his flooded house. But the city has put his home on a demolition list. He learned that from a FEMA official who stopped by and offered to tear his house down for free. But Gurley doesn't want it.

"He said, 'Well it won't cost you nothin'.' I said, 'I tell you what you could do instead of tearing my house down. I have some trees you could cut down that are going to be in the way when I renovate my house,'" Gurley said.

By rejecting the free demolition, Henry Gurley might have to pay city fines later. Barbara Breaux is chief deputy New Orleans attorney. She says the city isn't pressuring people to tear down, but wants them know their options.

"After FEMA stops paying for demolition, individual property owners will have to bear that cost on their own," Breaux said.

If homeowners can't pay to tear down or fix their property, the city could eventually take it. Part of the recovery plan announced this week is to use that land reclaimed by the city to pay for new housing developments.