Youth Radio's Susana Vuong says singing has been trumped by dancing in the arena of reality TV. She's all about America's Best Dance Crew. 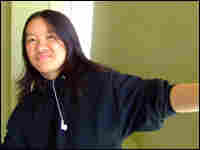 Susana Vuong says singing is out, dancing is in on TV. Courtesy Youth Radio hide caption

So Grace Kelly is the new John Coltrane?

We can always ask Youth Radio. Every Thursday young people tell us the new trends to look out for. We call this series What's the New What? Here with his commentary is Youth Radio's Susana Vuong.

Ms. RASHIDA (DJ on America's Best Dance Crew): I support that statement and I hope everybody else grows to agree.

Ms. VUONG: Well of course she agrees with that statement. That's DJ Rashida, and she works on "America's Best Dance Crew."

Ms. VUONG: Like American Idol, it's a talent competition. On "America's Best Dance Crew" it's groups of dancers from different cities that compete against each other. Some crews break dance, ballet, even. Some are dancing on skates, and they also use songs from popular artists such as Ne-Yo, Omarion, and Chris Brown. I'm a huge fan of the show, so of course I wanted to talk to my friends about it.

Unidentified Man #1: One of the differences between the two that I've noticed - it ain't no like super old people dancing, but it would be heck old people singing old boring music sometimes on "American Idol."

Unidentified Man #2: When you watch "America's Best Dance Crew," there's a lot more to look at. you looking at people dance, hop, skip, jump, running all around the stage.

Unidentified Woman #1: It's very different seeing someone trying to balance and doing the moonwalk or do a flip. It's crazy to me. I find it very interesting and very unique.

Unidentified Man #3: And a lot of folks haven't seen that side as far as that culture of crews and dancing, hip-hop or doing their own kind of flavor. That's something new. It's a huge craze.

Unidentified Man #5: I do want to introduce everybody in America to Pat. He does a butterfly flip which I think is pretty cool. And he drops into the splits.

Unidentified Woman #2: I think Jozan(ph) and Brian, that dip flips like back to back.

Ms. VUONG: I had a conversation with my cousin who lives in New York about our favorite crews. Of course, you know, all the crews he likes is from the East Coast, and you know we had a huge argument over who was the best crew.

BREAK SOME LEGS (Dance Crew)We are Break Some Legs from Philly!

BRAND: Day to Day is the somewhat new what, a production of NPR News with contributions from slate.com. I'm Madeleine Brand.