Accessibility links
Yefim Bronfman: A Soft Spot For Schubert The commanding pianist has won enthusiastic audiences in venues around the world. He visits one of his favorite concert halls to perform one of his favorite pieces — Schubert's Piano Trio No. 1 — with members of the L.A. Philharmonic. 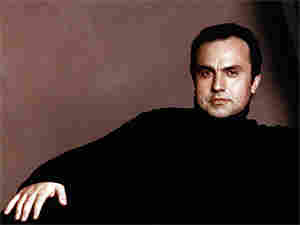 Yefim Bronfman has a long history with the Los Angeles Philharmonic: He won a Grammy for his recording of Bartok piano concertos with the orchestra. Carol Friedman hide caption

Pianist Yefim Bronfman has a repertoire that stretches from baroque to contemporary music. But he has a soft spot for the melodies of Franz Schubert.

He got the chance to play a little Schubert when he joined members of the Los Angeles Philharmonic at Walt Disney Concert Hall. Bronfman, a frequent visitor to the venue, says that even though the house seats more than 2,000 people, it's surprisingly cozy.

"Disney Hall is really a marvelous place for playing all sorts of music," Bronfman says. "It's not only for orchestra — I think the acoustics there and the environment is such that you can do the most intimate music. It reaches to the public in a very subtle way and a very intimate way. I think, personally, it's one of my favorite halls."

The concert begins with music from Franz Joseph Haydn, one of the primary developers of the string quartet. A group of orchestra members assembled to play selections from the "Rider" quartet — so named for the galloping rhythms of the first and last movements.

And finally, Bronfman joined L.A. Philharmonic musicians for the Schubert work he says he finds practically perfect: the Piano Trio No. 1 in B-flat major.

"It's the marvel of the universe," he says. "It has the most beautiful music I can possibly imagine. We're not talking about even structure and texture. The structure is, you know, simple and yet innovative. And the melodies are really to die for."