Accessibility links
A Grandmother Who Lived By The Rules — Her Own Even at 87, Kay Wang had a reputation for being strong-willed, something that began when she was a child. "I wasn't very nice" as a little girl, Wang told her son, Cheng, and her granddaughter, Chen. But Wang, who died in April, left a deep mark on her family.

Listen
A Grandmother Who Lived By The Rules — Her Own 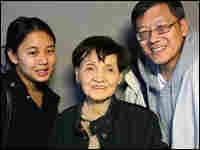 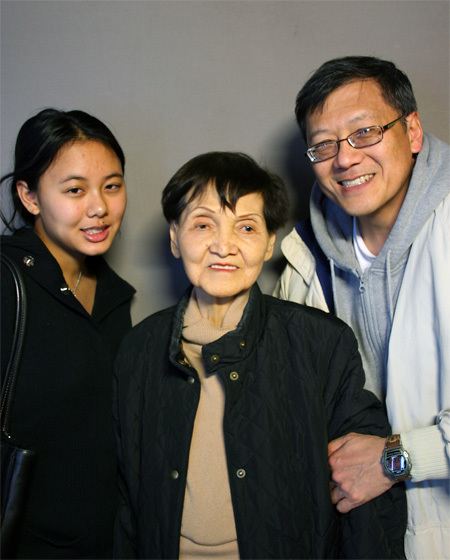 Kay Wang (center) with her granddaughter, Chen, and her son, Cheng, in New York City.

Even at 87, Kay Wang had a reputation for being strong-willed, something that began when she was a child.

"I wasn't very nice [as a little girl]," Wang told her son, Cheng, and her granddaughter, Chen.

Wang recalled how she was once expected to bring her mother a cup of tea to show her remorse for her behavior.

But the hot tea wound up in her mother's lap instead.

And at school, Wang said, she would lie and skip classes so she could see the boys who chased after her.

"I was still young; I was not bad-looking then," Wang said.

Wang was a detective at a Bloomingdale's department store for 18 years. Her stubborn streak made her follow a famous designer out of the store one day and ask her to pay for the $3,000 dress she had neglected to buy.

"Do you know who I am?" the woman asked.

On April 10, just weeks after recording her conversation with her son and granddaughter, Wang died of liver cancer. In her interview, she declared that she had no regrets.

"I think I'm old enough to do what I like," Wang said.

Produced for Morning Edition by Katie Simon. The senior producer for StoryCorps is Michael Garofalo. With special thanks to KALW in San Francisco. 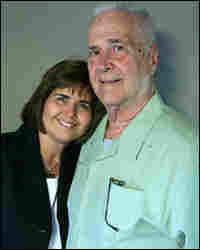 In 1963, Dr. Gustavo Mestas and his family escaped from Cuba and Fidel Castro's communist regime. His daughter, Ileana Smith, was 10 at the time. When she asked him about their move recently, Mestas responded with a laugh.

"That is a very complex problem," he said.

The answer involves an initial moment of joy at Castro's victory — and the realization, Mestas said, that with the way things were going, "this is not good for my children."

So when a friend with a boat talked about leaving, Mestas said he and his family would leave, too. They got on the boat and headed for Florida.

"I remember I was looking out the porthole," Smith said. "I saw the Russian coast guard, with their big guns."

And when they encountered a patrol boat during the nighttime voyage, Mestas' friend cut the engine on his boat for silence. His instructions to the passengers were clear: "No one talk, no nothing," Mestas said. "Because the patrol boat is the one that was killing people."

After reaching Florida, Mestas struggled. He had to attend more medical school before he could practice in the United States. He took the classes at night.

In the daytime, he worked in manual labor: picking tomatoes, cleaning motels. Then he walked to medical school.

"But even when you didn't have money for the bus," Smith said, "you bought me a Barbie doll."

"Because in Cuba, you had a room full of dolls," Mestas said. And the family had to sell them or leave them behind.

Mestas was an orthopedic surgeon in Cuba. But he decided to be a general practitioner in the United States — he didn't want to wait for years before being able to practice.

Of his new life, Mestas said, "The people here, the way they accepted me and the way they treated me, I paid them with hard work."

Over the course of a 30-year career, Mestas never missed a day in his office, he said.

"Even today, after more than eight years retired, I go to the grocery and I see the ladies and they kiss me," Mestas said. "I think they love me."

"I know they love you," his daughter responded. "They always tell me."

"I want you to know you have had the greatest influence in my life of anyone," she said.

"And I love you, and I respect you and admire you."

Produced for 'Morning Edition' by Nadia Reiman. The senior producer for StoryCorps is Michael Garofalo.