Accessibility links
Sporting Fame Comes With Limits In China With sporting fame comes corporate sponsorship, television appearances, and fat paychecks. But in China, athletes are expected to let the government manage their image and to hand over a substantial cut of their earnings.

The fourth of a five-part series. 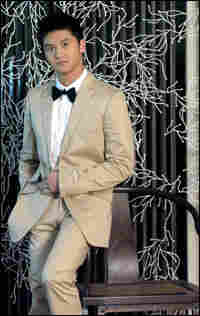 Tian Liang, shown here in a fashion spread, is now a media superstar. His springboard to celebrity was as an Olympic gold medalist. Photo courtesy of Tian Liang hide caption 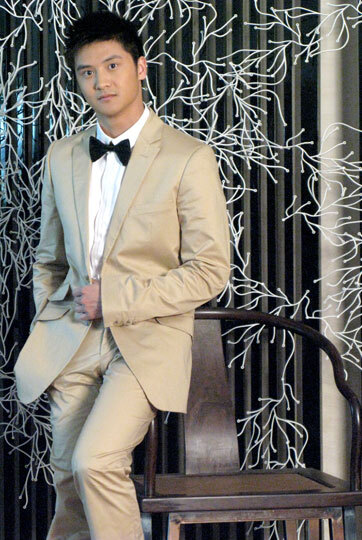 Tian Liang, shown here in a fashion spread, is now a media superstar. His springboard to celebrity was as an Olympian gold medalist, but sport and money now coexist uneasily in China. He was kicked off the national team because of his commercial activities.

China's economy is booming, and the country is rapidly modernizing. However a long-held national sports infrastructure remains in tact, a reminder of China's centralized Communist structure.

Children are plucked from as young as 4, brought up through the national athletic training system and, if they are good enough, put on a government salary to perform full time.

This summer's Olympics is expected to turn out a new crop of Chinese icons.

Clean-cut, with no political baggage — and capable of stoking national pride — China's gold medalists will be set to exploit their marketing power.

But the intersection of commerce and sports is where the free market clashes with the last vestiges of Beijing's centrally planned economy.

Diver Tian Liang's moment of triumph was at the 2000 Summer Olympics in Sydney. Just 21 years old, this fresh-faced man was nicknamed the "child prodigy" and the "diver prince." He won the gold medal for the 10-meter platform dive — a maneuver he had practiced for an entire year.

"When I had that gold medal in my hands, I thought it showed my efforts to prove myself among my competitors," says Tian, who also picked up a silver medal. "Of course my country had placed great hope in me. And after they got the news, I thought, 'Oh I've done a glorious thing for China.'"

He parlayed that success into endless advertising deals — for nutritional supplements, running machines and even wooden floors. He also topped the gossip columns for his high-profile relationship with another diver. This amounted to behavior the government found unbecoming for a national sports icon.

Four years later in Athens, he took home yet another gold and a bronze, boosting his stock still further. Too far, perhaps, for the sports czars who govern diving in China.

In 2005, Tian's income was $1.5 million. That year, he was unceremoniously booted off the national team, accused of not asking permission for his commercial activities. To this day, Tian insists he stuck by the rules but became a victim of circumstance.

"Many things happened," says Tian. "That's not to say that I was wrong or I should apologize. There were misunderstandings and miscommunications."

'They Belong To The State'

"What we've seen for a number of years now is the conflict between the market economy in sports and the state-planned aspect of sports," says Susan Brownell, a sports anthropologist from the University of Missouri-St. Louis.

Brownell has worked for many years in China. She says sports stars have to hand over a big slice of any deal — sometimes as much as 50 percent — to the government-run sports federations that trained them.

"The state has already invested so much money in them that they belong to the state," says Brownell. "This almost gets back to the parent-child relationship in China, the idea that a parent supports and raises a child to a certain point, and when that child has some success, they owe their parents some payback."

China's biggest sports earner, NBA basketball star Yao Ming, raked in $55 million last year, according to Forbes magazine. The center for the Houston Rockets handed millions back to China's government-run sports federation. These organizations still control almost every aspect of their athletes' lives — even those of the international superstars.

"When we sign a deal with current athlete, the normal process is first to knock on doors of federation. And so the federation is actually the frontline in terms of access to athlete," says Li Li Leung, managing director of sports marketer Helios Partners in Beijing.

However, Li Li says, the Olympics might mark a turning point. She would like to see the situation change so that sponsors can approach athletes directly, rather than go through the federation.

"It will be ideal situation if market does become much more free," she says.

Reforming the sports sector could lessen the government's iron grip over its athletes. That control was so all-encompassing Tian admits that when he left diving, he did not know how to order food in a restaurant or buy plane tickets by himself. Nowadays, he professes to be content with his lot, though he still thinks about the Beijing Olympics with some sorrow.

"I have a few regrets because I'm used to participating in the Olympics as an athlete," Tian says. "But sometimes things happen that you don't anticipate."

With that, he goes back to posing for a fashion spread against a backdrop of wine bottles. What is striking is that three years on, this former golden boy is still on message, refusing to publicly criticize the system that rejected him. Its financial and practical hold over him is long gone, but the mental bonds may prove harder to break.