Accessibility links
China Trains Cheerleaders To Rally The Masses The Chinese government is training 300,000 cheerleaders in the hopes that their peppy slogans will drown out any embarrassing lapses in sportsmanship at the Beijing Olympics. Still, such conformist cheerleading invites comparison to China's mass campaigns of the past.

The fifth of a five-part series. 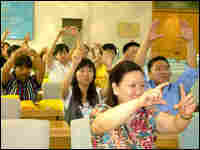 These cheerleaders each will receive 10 hours of Olympic education, which involves learning the official slogans and Olympic songs. Louisa Lim/NPR hide caption 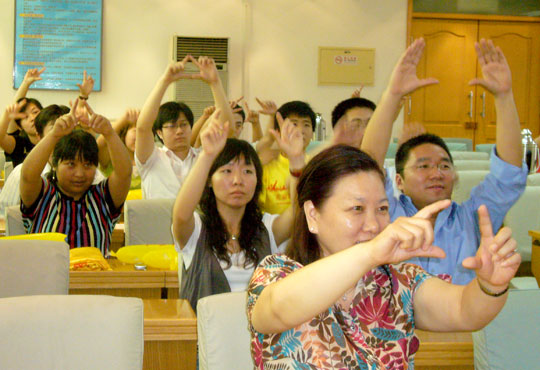 These cheerleaders each will receive 10 hours of Olympic education, which involves learning the official slogans and Olympic songs. 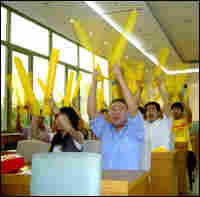 A few of the 300,000 cheerleaders who have been trained by the Chinese government in the run-up to this summer's Olympics in Beijing. Louisa Lim/NPR hide caption 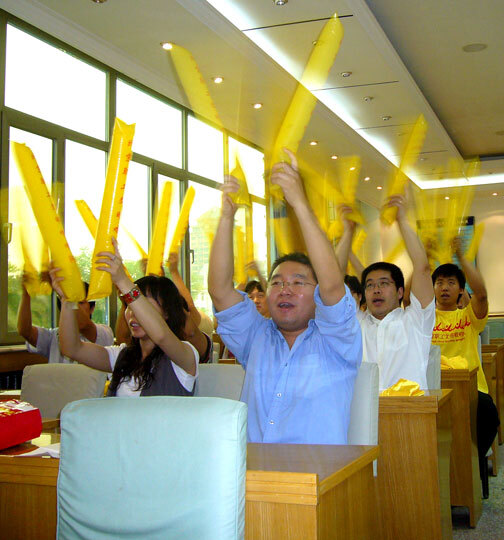 A few of the 300,000 cheerleaders who have been trained by the Chinese government in the run-up to this summer's Olympics in Beijing.

China's economy is booming, and the country is rapidly modernizing. However, a long-held national sports infrastructure remains intact, a reminder of China's centralized Communist structure.

Children as young as 4 are brought up through the national athletic training system and, if they are good enough, put on a government salary to perform full time.

Rethinking of this antiquated system has been put on hold, as China's desire to win gold medals on home turf at the Beijing 2008 Summer Games takes precedence.

It is no coincidence that the first published essay of China's former leader, Chairman Mao Zedong, was about sports.

A strong nation, he wrote, needs strong people. And China has long used sports to bolster its international position and unite its masses.

But the controversies surrounding this summer's Olympics in Beijing have heightened a heady mixture of Chinese pride and nationalism.

The students in one cheerleading class are not leggy athletic girls with pompoms, but rather desk-bound, middle-aged government employees brandishing balloons.

These workers have volunteered, without pay, to be cheerleaders. They are receiving 10 hours of instruction in how to shout the officially approved slogans, such as "Go China! Go Olympics!"

At least 300,000 such volunteers will make up China's Olympic cheering squads. And 3,000 of those have been trained by Zhang Jinling, a professional enthusiast with a fixed rictus grin of joy.

"We raise our arms and shout powerfully to encourage China and the Olympics," she says to her students.

"Our cheering squads are more of a collective undertaking than NBA cheerleaders; they're more unified as a whole," Zhang says, explaining why China's fans should cheer with one voice. "Our squad is made up of workers and staff from different units, and they show the realization of our 100-year-long dream."

That dream has been to host the Olympics for the first time in China's history.

For this cheering squad, the Games signify China's arrival on the world stage as an equal. It is all the more symbolic given Beijing's official historical narrative, emphasizing a century and a half of humiliation at the hands of the West and Japan.

No 'Sick Man Of Asia'

"In modern times, China has been a backwards, weak country," says Xiong. "We think that the Olympics is a way to cast off that sense of humiliation, to change China's international image as the 'sick man of Asia.' That's the dream of the Chinese people."

For this reason, the Olympic torch relay was supposed to be a global victory lap.

Instead, it became a lightning rod for protests over Beijing's human rights record. This was a shock to many Chinese people, who expected international goodwill for China's achievements. The controversy heightened feelings of nationalism, nurtured by a potent mixture of extreme pride and extreme humiliation.

"Chinese people are very friendly," says cheering squad member Yao Jiabin. "We Chinese do not oppose any country, but we do have our own stance. And we're friendly towards people from every country, just as long as they don't oppose our stance."

Politics On The Field

In the past, Chinese nationalism has reared its ugly head on the sports field, especially during soccer games. One low point for sports in China was the Asian Cup football competition held in Beijing in 2004, as Sino-Japanese relations had plummeted to a low point. When the Japanese national anthem began playing, the crowd erupted into a chorus of boos.

Throughout the match, every time the Japanese team had possession of the ball, the Chinese spectators booed and whistled.

The Japanese spectators were placed under police protection, and after the match they were escorted from the stadium by bus to protect them from angry mobs of young Chinese men.

The Olympics may also trigger some displays of sports nationalism, according to sports anthropologist Susan Brownell, the author of Beijing's Games: What the Olympics Mean to China.

"I think we are likely to see some impolite, unsportsmanlike performance from some of the Chinese crowd, who will be displaying nationalistic feelings and supporting China, and perhaps booing Japan or the U.S. or other countries," says Brownell. "It's not just due to Chinese nationalism; it's due to the lack of sophistication of the spectators who do not normally spectate at sports events."

This is why cheerleading trainer Zhang Jinling has been enlisted. Beijing may just be hoping generic cheers of "Higher! Faster! Stronger!" will drown out any embarrassing lapses in sportsmanship — even if such conformist cheerleading invites comparison to China's mass campaigns of the past.

This is the biggest Olympic education campaign to teach spectator etiquette to the masses.

Zhang reminds her class of their duty: "Our ordered movement, our loud and clear shouts will definitely create a good atmosphere for the athletes, so they'll be able to get new Olympic records on our yellow earth."

With that, she launches into an official Olympic song, complete with a baffling sequence of complicated hand gestures.

"Smile, Beijing," the song exhorts, "a smile shows Beijing's best tomorrow." That may be true, but such mass campaigns also serve as a reminder of how closely intertwined sports and Chinese nationalism are — and how that worries Beijing.