Accessibility links
Albuquerque: A Scene Blooms In The Desert A jazz fan visiting the desert city might equate the chances of seeing great live jazz there with the chances of getting caught in a rain shower. But since the 1970s, a devoted group of musicians and educators has turned the area into a hotbed for jazz performance.

Listen
Albuquerque: A Scene Blooms In The Desert

Listen to songs from live performances at the Outpost

Learn more about the scene 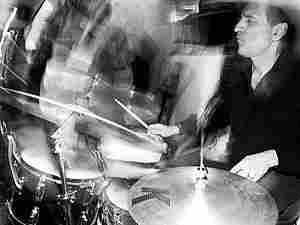 A jazz fan visiting Albuquerque, N.M., might equate the chances of seeing great live jazz there with the chances of getting caught in a rain shower. But since the 1970s, a devoted group of musicians and educators has turned the area into a hotbed of jazz performance, with a scene so hearty, its musicians can support themselves by playing out. Its venues are so magnetic that international stars often make it a stop on their tours.

The nonprofit New Mexico Jazz Workshop began in 1976 as a collective of just eight musicians in nearby Santa Fe who realized that if they were going to survive as jazz players in the desert, they were going to have to hustle gigs and educate an audience. So they put on summer shows at a small-town ball field between Santa Fe and Albuquerque and started a series of concerts in the schools.

Thanks to the efforts of the Jazz Workshop, Albuquerque locals can count on a salsa or Latin jazz band every Friday night, and a jazz or blues band every Saturday night throughout the summer in an outdoor amphitheater at the Albuquerque History Museum. For 15 years, the Jazz Workshop has built a solid audience with these weekend concerts.

Boston-raised avant-garde saxophonist Tom Guralnick entered the New Mexico music scene in the late 1970s and briefly took over the reins of the Jazz Workshop in those early years. He left to work more on his own music career, but returned to New Mexico in 1985 with an idea that would transform the local scene.

"My idea was, in being here, that I would start another organization that did different kinds of experimental music and world music and then later jazz," Guralnick says. "Key to what I wanted to do was to have a small performance space like some of the places that I'd been to in Europe."

What he settled on was small: a storefront one block south of the legendary Route 66. "It was a print shop," he says. "It was owned by two brothers — the Furry Brothers, believe it or not."

Like most jazz musicians, Guralnick wasn't rich. He sold his house to raise the money to buy the place, and he moved into the upstairs apartment. Below, he created a 90-seat, nonprofit listening room — not a club. He called it The Outpost Performance Space. "We set it up as a long, narrow space where people would only be three rows from the stage," he says. "You know, the whole thing was ... No, maybe it wasn't the perfect performance space, but it was what we had."

Over the course of 10 years at that location, with the help of some large grants, Guralnick was able to turn the Outpost into a tour stop for internationally known jazz musicians. Names such as Dave Holland, Bill Frisell, Eddie Harris, Bobby Bradford, Jane Ira Bloom, James Moody, Oliver Lake and a pair of Guralnick's favorites, the late saxman Steve Lacy and trombonist Roswell Rudd, all played the Outpost.

In 2000, Guralnick bought a karate studio in the University District a few miles west of the original Outpost and converted it into the new-and-improved 150-seat Outpost Performance Space. The space is humming almost every night, with performances of jazz, folk, blues or world music, or jazz classes for teens and adults.

Pianist and composer Vijay Iyer first played the Outpost in 2005. He says the reason musicians keep coming back is simple: People go to the Outpost to listen. "First of all, when we drove up to the place, I was just amazed that there was a free-standing structure in the United States that's dedicated all year 'round to this kind of music. And it wasn't a club," Iyer says. "Because most of these venues, you know, if you go to Yoshi's in Oakland, Calif., or some of the clubs in New York, these are great places to play, but you're always competing with what's on the menu. I mean, if every state in the United States had one venue like this, the entire landscape would be totally different."

The landscape in Albuquerque has been carefully designed to build a supportive audience base. From the beginning of the Jazz Workshop, education for adults and young people was part of the plan. Those efforts continue today, with classes presented by both the Jazz Workshop and the Outpost.

One of the products of the Albuquerque scene is 25-year-old Matt Brewer. He went to shows, took classes at the Outpost and started playing professionally when he was 12. Now, he's one of Manhattan's most sought-after bassists. "All the best players in New York that I've spoken with about Albuquerque have been really impressed with their time there," he says. "Because audiences are really attentive, shows are often packed full of people. And I think people can tell that the organizations that are bringing shows in are run by people who actually have a passion and love for the music."

It's certainly not to get rich, Guralnick says. "Club owners, nonprofit organizations, musicians are not making a lot of money. And we all support each other in our efforts to keep this music going. We're all in it for the same reason. All of my colleagues, jazz presenters, have been or still are musicians. I would say 90 percent of them. That's why we got into presenting music: because we believed in the music and know what it's about to be playing music."

Charles Lowery, who runs the Jazz Workshop, says the jazz scene thrives in New Mexico because of the steady dedication of each member of the jazz community. He says its goal is "to help keep alive the education of young people as well as adults, so they appreciate, understand and support live music. I think that's precisely why we're in it. We enjoy what we do. We know it has made, and continues to make, a difference in the lives of people. It's good work. It's meaningful work."

Because of those efforts, good musicians can keep busy enough to at least pay the mortgage — which is a lot cheaper here than in New York or Los Angeles. David Parlato moved here in 1990. He had been a top session bassist in Los Angeles, playing with everyone from Mose Allison to Frank Zappa. But he says that in L.A., that's all he was. Here, he not only plays his own music, but also directs the Outpost education program, which offers classes for kids and adults.

"When I moved here, I realized that I could do anything that I wanted to do in the field of music," Parlato says. "I could wear many more hats here, and it would be OK. I formed a big band here at the old Outpost and had that band for four years. I never would have even thought of doing that in Los Angeles."

Other players who've migrated to the area to escape the density and grit of the urban jazz scenes have added legitimacy, such as clarinetist Eddie Daniels and vocalist Chris Calloway. Some true legends — Herbie Mann, Kenny Davern and Frank Morgan among them — all chose to live and play out some of their final years here. Some who grew up here, like trumpeter Bobby Shew and sax man Doug Lawrence, have moved back. And many of the good players who already lived in New Mexico have decided to stay, because the scene can support them.

"I don't know. New Mexico's a special place," Guralnick says. "I mean, it really is. We call it the Land of Enchantment, which then turns into the Land of Entrapment, you know? People come here thinking that they're going to stay for a while, like myself. Thirty years later, here I am."

The third annual New Mexico Jazz Festival is going on right now — July 17-28 — with nearly two weeks of concerts in Albuquerque and Santa Fe featuring both the best of the local talent and a number of international stars.