Accessibility links
The Choice To Do It Over Again Daniel Flanagan was a high-school dropout in a dead-end job; a self-described loser. But when faced with the responsibility of fatherhood, Flanagan decided to change his ways and return to school. He believes we all deserve "do-overs" in life.

Listen
The Choice To Do It Over Again 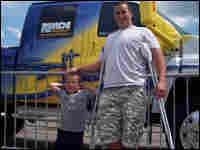 Daniel Flanagan lives in Redford, Mich., with his wife and son, Blake (in photo), and daughter, Gabby. He builds sheds and garages for a living. Flanagan wrote this essay for an English 101 class at a local community college where he is studying sociology. Photo courtesy of Daniel Flanagan hide caption 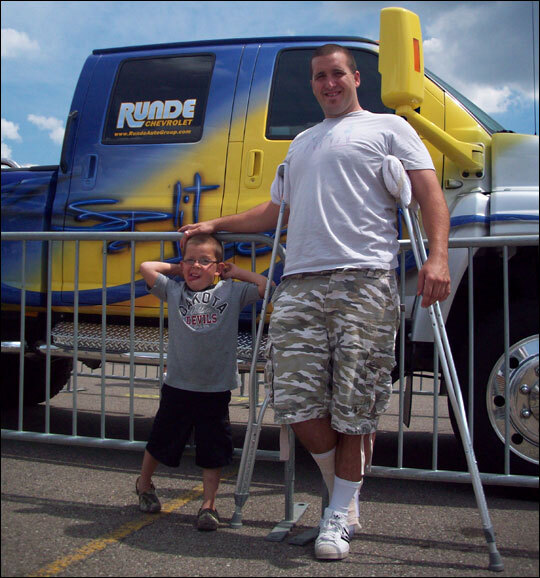 Daniel Flanagan lives in Redford, Mich., with his wife and son, Blake (in photo), and daughter, Gabby. He builds sheds and garages for a living. Flanagan wrote this essay for an English 101 class at a local community college where he is studying sociology.

I don't know why I came to the decision to become a loser, but I know I made the choice at a young age. Sometime in the middle of fourth grade, I stopped trying. By the time I was in seventh grade, I was your typical degenerate: lazy, rebellious, disrespectful. I had lost all social graces. I was terminally hip and fatally cool.

It wasn't long after that I dropped out of school and continued my downward spiral. Hard physical labor was the consequence for the choices I made as an adolescent. At the age of 21, I was hopelessly lost, and using drugs as a way to deal with the fact that I was illiterate and stuck in a dead-end job carrying roof shingles up a ladder all day.

But now I believe in do-overs, in the chance to do it all again. And I believe that do-overs can be made at any point in your life, if you have the right motivation. Mine came from a surprising source.

It was September 21, 2002, when my son Blake was born. It's funny that after a life of avoiding responsibility, now I was in charge of something so fragile. Over the years, as I grew into the title of Dad, I began to learn something about myself. In a way, Blake and I were both learning to walk, talk, work and play for the first time. I began my do-over.

It took me almost three years to learn how to read. I started with my son's books. Over and over, I practiced reading books to him until I remembered all the words in every one of them. I began to wonder if it were possible for me to go back to school. I knew I wanted to be a good role model, so after a year-and-a-half and a lot of hard work, I passed my GED test on my son's fourth birthday. This may not sound like much, and I'm surely not trying to get praise for doing something that should have been done in the first place, but all things considered it was one of the best days in my life. Today, I'm a full-time college student, studying to become a sociologist.

It's funny, growing up I always heard these great turn-around stories of triumph over shortcomings. But I never thought they applied to me. Now I believe it's a choice anyone can make: to do it all over again.