Accessibility links
Tiny Texas Cafe Fills Up After Barbecue Award Every five years, Texas Monthly chooses the best barbecue in a state that reveres smoked meat. Snow's BBQ in Lexington was unprepared for the onslaught of customers following its first-place win. 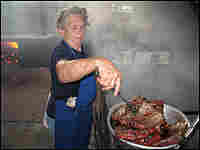 Tootsie Tomanetz, pit master at Snow's BBQ in Lexington, Texas, pulls ribs off the pit early Saturday morning in preparation for the crowds that have descended on the tiny café. John Burnett/NPR hide caption 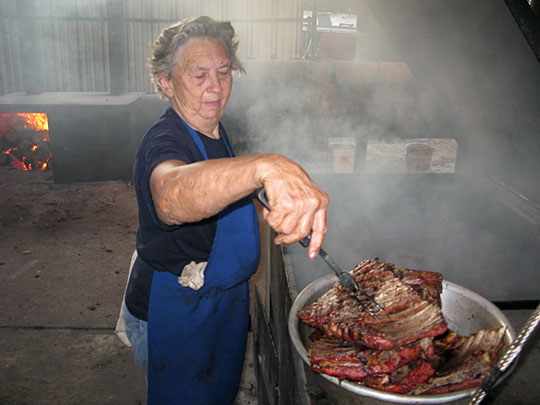 Tootsie Tomanetz, pit master at Snow's BBQ in Lexington, Texas, pulls ribs off the pit early Saturday morning in preparation for the crowds that have descended on the tiny café.

Read the Texas Monthlyarticle that brought Snow's BBQ "into the daylight." 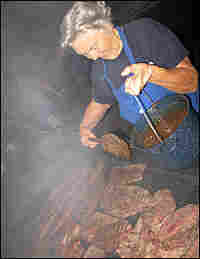 Tomanetz, nearly oblivious to the smoke after 42 years of barbecuing, bastes the pork ribs with her famous mop sauce. John Burnett/NPR hide caption 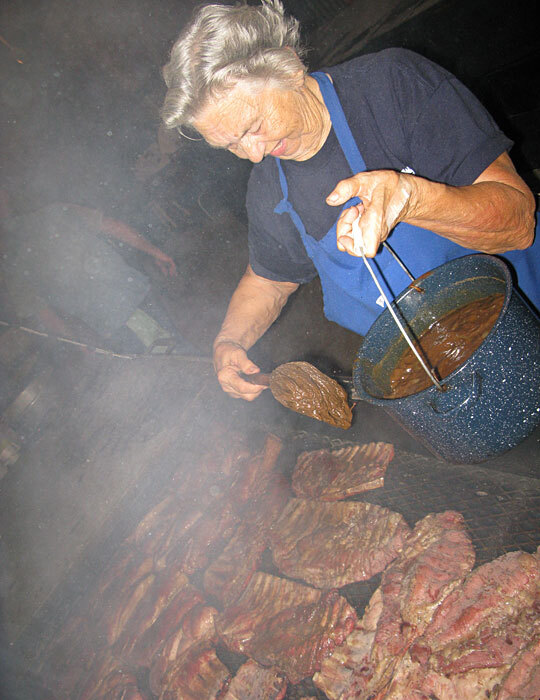 Tomanetz, nearly oblivious to the smoke after 42 years of barbecuing, bastes the pork ribs with her famous mop sauce.

The Etymology of BBQ

Barbecue is religion in Texas.

Every five years, Texas Monthly goes on a quest for the Holy Grail — to find the best barbecue in a state that reveres smoked meat. It takes the mission seriously.

This year, the magazine dispatched 18 writers who traveled nearly 15,000 miles to 341 establishments. In an unheard-of upset, a tiny cafe in central Texas beat out the longtime favorites to take first place.

Snow's BBQ is in the little town of Lexington, an hour's drive northeast of Austin. It's open only on Saturday mornings. Owner Kerry Bexley is a bandy-legged former rodeo clown and prison guard. He and his helpers arrive at 10 p.m. Friday to light the oak logs.

"I want to keep my heat about 250-275 in there on them briskets," says an employee called Cotton, over the roar of a propane torch. "I ain't got that, I ain't doin' no good."

Barbecue requires heat, smoke, salt and pepper, and time. The alchemist of these ingredients is known as the pit master. At Snow's, the pit master is Tootsie Tomanetz, who's been cooking barbecue in central Texas for 42 of her 73 years. She shows up at Snow's at 2 a.m. like a Texas tornado.

Miss Tootsie — as she's respectfully called — tends the massive iron pits and hissing fireboxes like an admiral minding her fleet. Her gray hair is cut sensibly short. A blue apron is fastened around her waist. During the week, she works as a school custodian. On Saturday mornings, her strong arms turn short ribs and chicken halves, briskets and pork steaks with a practiced flip of the fork.

Standing before the pits all night, she's enveloped in smoke. But, like a beekeeper resistant to stings, it doesn't seem to bother her. She's all business.

Once upon a time, Miss Tootsie cooked mainly for local customers. But that was before "the article," as they say around Snow's.

"We were named No. 1 in Texas and from that point on our whole business has changed drastically," Bexley says. "We've gone from cooking from 300 pounds to cooking in excess of 1,000 pounds, and last week we sold out before 10 [a.m.]."

"There's one gentleman," he continues, "who called in this week from Fort Worth. He ordered a half pound of brisket, one link of sausage and two ribs. That just blows my mind. Four-dollars-a-gallon gas — it's just hard to imagine how far people will travel for barbecue."

Within Texas, the discovery of Snow's has been met with the excitement that elsewhere might herald the unearthing of an unknown Mayan city or the finding of an unfinished Hemingway manuscript.

"My first reaction when I heard about Snow's was this is impossible," says Paul Burka, executive editor and chief barbecue gourmand at Texas Monthly. "It doesn't happen. There are no unknown great barbecue places in Texas."

The most famous barbecue places in the state are well known. The perennial pantheon is Louie Mueller in Taylor; Kreuz Market and Smitty's in Lockhart; Cooper's in Llano; and City Market in Luling. One of them has a century-old pit. Then along comes Snow's, which is five years young. But they say Tomanetz's brisket is almost indescribable.

"I wrote that it was as soft and sweet as cookie dough," Burka says. "It almost transcended meat."

The price of fame has been high. Snow's was unprepared for the onslaught. The question for anxious barbecue lovers here is whether Miss Tootsie can take the pressure and maintain her quality.

"It was a good article. It brought us into the daylight," she says evenly. "But it has blowed our business out of proportion. There's no time for relaxation, I'm constantly on my toes...and here we go."

She wraps briskets and ribs in foil to keep them moist and puts them back on the grills. All night, she's been making liberal use of her "mop sauce," made of onions, mustard, butter, vinegar and Worcestershire sauce. "We have mopped the pork ribs again; we've mopped the chickens. Things'll be moving pretty quickly now," she says, with an eye on the clock.

With only an hour until opening, the focus of activity shifts indoors to the tiny dining room. Bexley's daughter, Larisa, has driven in from Texas A&M University, and his neighbor, a beautician named Phyllis Rogers, has also come in to serve.

"We're a pretty laidback little town, and this is pretty incredible to have these people come from all over the state and other states just to eat brisket," Rogers says. "Of course, Miss Tootsie does a good job; she's had lots of practice. Forty-two years is a lot of briskets."

By 7:30 a.m., there are already 22 people lined up outside, not at all intimidated by the prospect of barbecue for breakfast. At 8 a.m., Bexley checks to be sure they have enough potato salad, coleslaw and white bread, and unlocks the door. "Herd 'em in!" he calls, and the first customers crowd into the serving line.

On this morning, Snow's BBQ will sell out in about an hour. Some frustrated out-of-towners will climb back in their cars and vow to return next week even earlier. Miss Tootsie will worry that there's no barbecue left for her local customers, whom she's been serving for decades.