Accessibility links
In Concert, A Moment Of Sudanese Solidarity At a time of outright genocide in Darfur, and civil unrest throughout the Sudan, an unprecedented gathering of musicians from across the war-torn country presented a contrasting picture — one of harmony and unity — at the Sudanese Festival of Music and Dance in Chicago.

Listen
In Concert, A Moment Of Sudanese Solidarity 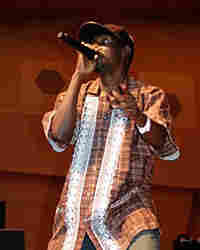 The performer Dynamq hails from the southern part of Sudan. Banning Eyre for NPR hide caption 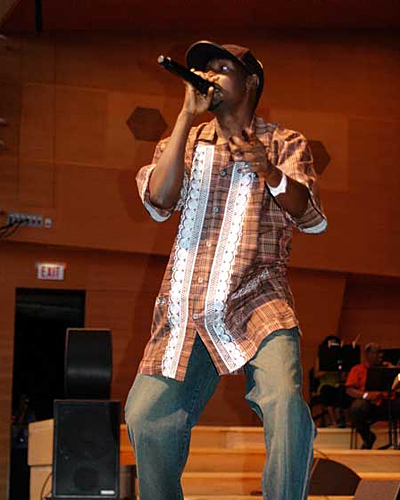 The performer Dynamq hails from the southern part of Sudan. 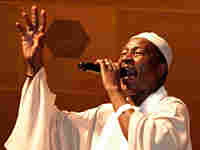 Singer and composer Omer Ihsas is one of the biggest musicians to emerge from Darfur. Banning Eyre for NPR hide caption 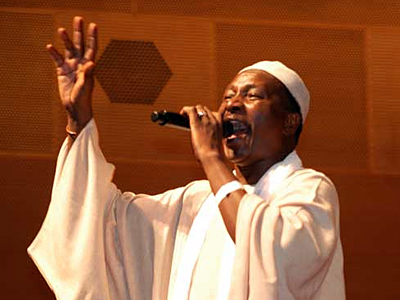 Singer and composer Omer Ihsas is one of the biggest musicians to emerge from Darfur. 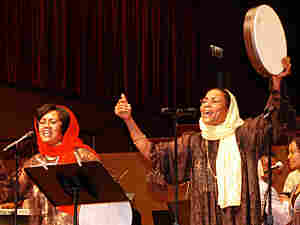 Two members of Al Balabil, a sister act once called "The Supremes of Sudan," perform at the Sudanese Festival of Music and Dance. Banning Eyre for NPR hide caption 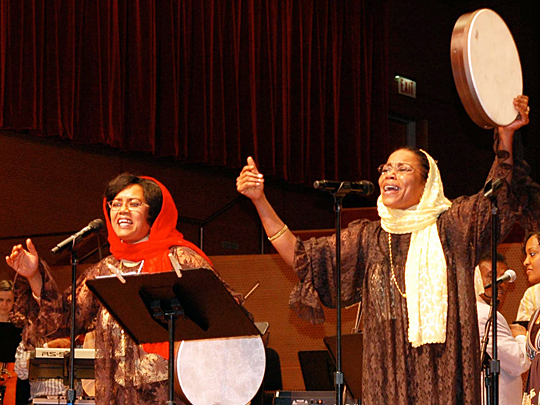 Two members of Al Balabil, a sister act once called "The Supremes of Sudan," perform at the Sudanese Festival of Music and Dance.

Thirty-three musicians took the stage at Chicago's majestic Millennium Park. They formed an orchestra of brass, strings, percussion, guitars and keyboards, which together backed eight singers from different regions of Sudan.

The 2008 Sudanese Festival of Music and Dance made its debut in Chicago last week, and travels to Detroit tomorrow. At a time of outright genocide in Darfur, as well as lower-level conflicts in Sudan's south, east and north, this unprecedented gathering of musicians from all regions of the country presented a contrasting picture of the country: one of harmony and unity. In all, it was a pageant of the Sudan that could be.

Song Of The South

Sudan is Africa's largest nation, home to some 300 ethnic groups, including practitioners of Islam, Christianity and animist religions. It achieved independence in 1956, but after a long history of divide-and-rule politics by Egyptian, Turkish, British and local leaders, Sudan is still struggling to become a nation.

That struggle was on display in Chicago. The Sudanese community there includes many so-called "lost boys," refugees from the civil war in the south, and some of them wondered aloud why the south was not more strongly represented in the concert program. There was just one southern singer, a young man who goes by the stage name Dynamq.

"Our southern part of Sudan, I think our music is more like the underground music in America," Dynamq says. "There are a lot of musicians, but it's the opportunities. They don't have the ability to say, 'You know what, I have a song in mind. Let me get in my car, go to the studio and lay it down.'"

With an overtly political reggae song called "Inner City War," Dynamq was something of a fish out of water rehearsing with musicians from Khartoum's musical elite. But the artists were determined to overcome cultural, stylistic and historic divisions.

"Everywhere there is a problem," Hadia Talsam of Al Balabil says. "It's not only west. It's not only south. In the north as well, people are also dying. So if everyone is talking about this problem particularly, then who is going to represent the whole country? It's us."

As the concert neared, there were issues, funding shortages, late arrivals that disrupted a tight rehearsal schedule and visa complications that stranded musicians in Khartoum and Cairo. Most dangerous of all, a false rumor spread that the hated Sudanese regime was behind the concert. Veteran Sudanese producer and orchestra director Yousif El Mosley responded.

As the concert began, the elegant music of Sudan swept over Millennium Park, where a crowd was gathering despite iffy weather. Later on, a fierce Chicago thunderstorm struck, driving the most determined fans, including many Sudanese, to the sheltered zone close to the stage where they shouted and waved, creating the atmosphere of a rowdy street party.

Omer Ihsas represented Darfur with a mighty voice and soaring spirit, and Al Balabil, the last to sing, showed why the group was once called The Supremes of Sudan. The big surprise for musical director El Mosley turned out to be Dynamq.

"Dynamq is brave," El Mosley says. "Because he knows the voice is the most important part of the game. So he played with the voice. He played with communicating with the audience. I loved him very much."

In the concert's finale, artists, organizers and lost boys sang and danced together before a sea of waving arms. And for one beautiful moment, Sudan became a nation.