Accessibility links
Nuclear Power A Thorny Issue For Candidates Republican John McCain says he supports nuclear power. Democrat Barack Obama says it shouldn't be taken off the table. But the issue is a delicate one, and both presidential candidates have chosen their words with care. 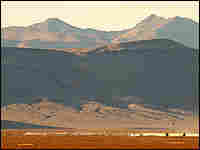 McCain is a strong advocate for nuclear power and sees it as essential to combating global warming. He calls it "one of the cleanest, safest and most reliable energy sources on Earth."

In the Senate, he voted to send waste to the controversial Yucca Mountain site in Nevada. But he's softened his position since taking to the campaign trail. McCain has proposing building an international repository, primarily to keep used reactor fuel out of the wrong hands, but he has suggested that such a repository could also make a site at Yucca unnecessary.

Obama stops short of endorsing nuclear power, saying — when asked — that he thinks it shouldn't be taken off the table. He has said he would only support building more reactors if four issues can be resolved: safety, waste storage, vulnerability to terrorist attack, and weapons proliferation concerns. There are a "whole set of questions," he told a New Hampshire newspaper early in the campaign. "And they may not be solvable."

Like Democratic presidential candidates before him, Obama opposes plans to send waste to Yucca Mountain in Nevada.

Nuclear power doesn't usually make for an applause line in a stump speech, but it has come up on the campaign trail. Both Sens. Barack Obama and John McCain see it as a way to combat climate change, though they've sometimes chosen their words with care.

Of the two, McCain is the most comfortable with the topic. As a Navy pilot, he landed on aircraft carriers, which today are essentially floating nuclear-powered cities. McCain calls nuclear "one of the cleanest, safest and most reliable energy sources on Earth."

"If we want to arrest global warming, then nuclear energy is a powerful, powerful ally in that cause," he said in a May speech.

McCain's enthusiasm for nuclear has put him in unusual territory for a Republican: He's been praising the French, who generate 80 percent of their power from nuclear.

Obama's position is also somewhat unusual for a Democrat: He thinks nuclear power might be a good idea. The question came up during an early Democratic primary debate.

Former North Carolina Sen. John Edwards went first, saying he did not favor nuclear power. Obama went next. "I actually think we should explore nuclear power as part of the mix," he said, before pivoting to solar energy, a much safer topic.

When asked about his position early on by a New Hampshire newspaper, Obama said he was open to the idea if certain problems could be solved. And it was a long list of issues, including safety, waste storage, vulnerability to terrorist attack and concerns about weapons proliferation.

But if those are solvable?

"Why not?" Obama said. "I don't think there is anything we inevitably dislike about nuclear power. We just dislike the fact that it might blow up ... and irradiate us ... and kill us!" His questioners laughed.

But Obama has since polished his response to that question.

Obama's home state of Illinois has more reactors than any state in the country. And he has some ties to the company that operates those reactors.

According to the Center for Responsive Politics, employees at Exelon have given Obama more than $180,000 in campaign contributions. Two spokespeople for the company declined requests for an interview, saying a chairman of an electricity distribution company it owns had run an Obama fundraising event.

Obama seems happy to keep his distance as well. He recently used nuclear power to paint McCain in a negative light. After criticizing McCain for wanting to open up more land for oil drilling, Obama added, "That makes about as much sense as his plan to build 45 new nuclear reactors without a plan for the waste, other than put it — guess where? — right here in Nevada, at Yucca Mountain."

Obama, like other Democratic presidential candidates before him, says he's opposed to sending the waste to Nevada.

The waste issue even seems to have gotten to McCain. In the Senate, McCain voted to send waste to Yucca Mountain. But on the campaign trail, he seems to be softening his stand. McCain has proposed building an international repository, primarily to keep used reactor fuel out of the wrong hands, but maybe with a second purpose.

"It is even possible," McCain said, "that such an international center could make it unnecessary to open the proposed spent nuclear fuel storage facility at Yucca Mountain in Nevada."

Eric Herzik, chair of the political science department at the University of Nevada, Reno, says he was surprised to hear McCain say that.

"His voting record is very clear," Herzik said. "He has backed the Yucca Mountain repository and made no apologies for it, until about two months ago, (when) he came to Nevada and kind of gave this mixed signal."

Herzik has studied the politics of nuclear energy for 20 years. And he says whoever is elected won't be able to just talk their way out of the nuclear waste problem. The government has spent billions of dollars researching Yucca Mountain and millions fighting court battles. Finding another site abroad or at home will not be easy and could take decades.

"To say, 'Well, we'll just find some magic beans and plant them in the ground and a repository site will grow where everybody wants it' — we've never been able to find that," Herzik said.

The irony is that for all the trouble nuclear power and waste gives the candidates, Herzik says there's little evidence it actually affects how people vote for the president. He and his colleagues have done some polling, and even in Nevada, when voters are asked to rank nuclear waste with other issues, it comes out at the bottom of the list.