Accessibility links
Philadelphians Reflect On City's Racial Legacy Three generations of women from an African-American family in the historic city of Philadelphia reflect on how their city and its people have changed during the past century. 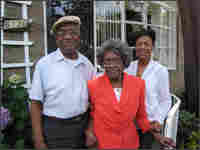 Anna Henderson (center) is the matriarch in a family that spans three generations of Philadelphians. Joel Rose/NPR hide caption 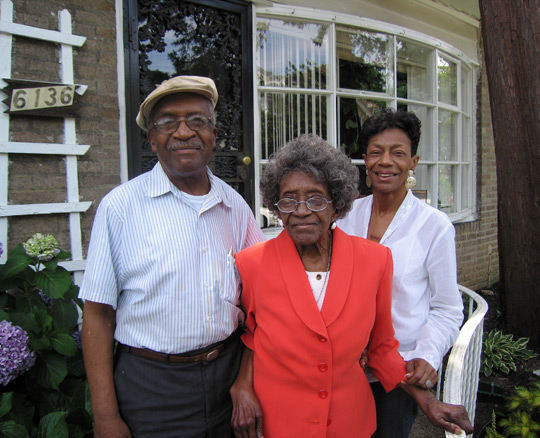 Anna Henderson (center) is the matriarch in a family that spans three generations of Philadelphians.

Three hundred years ago, the newly formed city of Philadelphia was a rowdy and crowded mix of cultures. Nearly a century later, the city was shaping early American culture through one of the country's first public museums. 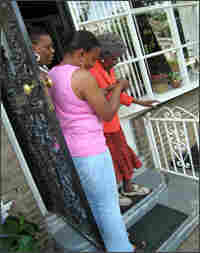 Henderson, 108, came to Philadelphia with her parents in 1922 at a time when blacks were leaving segregated southern cities and heading north. Joel Rose/NPR hide caption 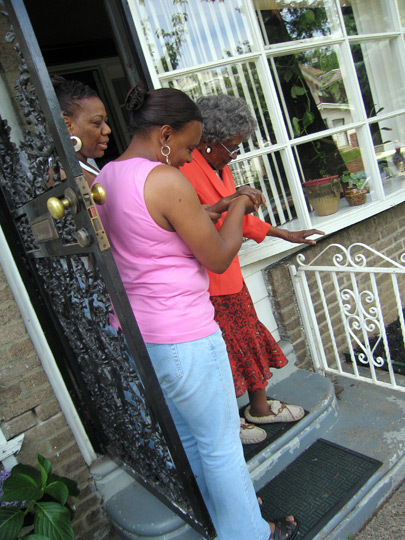 Henderson, 108, came to Philadelphia with her parents in 1922 at a time when blacks were leaving segregated southern cities and heading north. 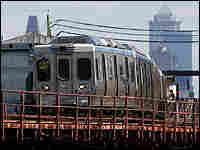 By 1908, Philadelphians were riding in style on a brand new rail system along the Market-Frankford line. Before then, Philadelphians had to rely on an unreliable network of commuter rail lines and streetcars. Downtown was often jammed with on-street trolleys that would snarl traffic at a single breakdown.

George Smerk grew up in Philadelphia and is now a professor emeritus of transportation at Indiana University. He says the subway transformed the city because "it tied Philadelphia together better than anything had before that time."

The trains opened Philadelphia to residents from outside the city center, and businesses flourished with the new traffic. Smerk's father worked for Gimbel's department store for 43 years and experienced the impact of the subway firsthand. "It put a lot of shekels in the pockets of the department store owners because it was so easy to get to them," Smerk says.

One of the enduring and visible legacies of the subway system is Philadelphia's expansive western suburbs. People were able to move out of downtown because of the trains. The system "tied Philadelphia together better than anything had before that time," Smerk says.

Weekend Edition Sunday is traversing Philadelphia during a month-long series to shine a light on what it means to be an American. During a recent trip, NPR's Liane Hansen spoke with an African-American family whose personal history spans three generations of Philadelphia's history.

The end of the 19th century saw the growth of industry and infrastructure in Philadelphia. The Pennsylvania Railroad was established in the early 1900s, and by 1908, the first subway trains were rumbling below the city's streets.

It also saw major demographic changes. For decades, African-Americans had been leaving segregated cities in the South for better economic and social opportunities north of the Mason-Dixon Line.

Philadelphia — which had the largest free black population in the United States at the time of the Civil War and was the epicenter of the abolitionist movement — became a magnet for African-Americans. Today, they comprise nearly half of the city's population.

Anna Henderson, 108, was part of this "Great Migration." She came to Philadelphia from Georgia with her parents in 1922. When she moved into her neighborhood, "the whole thing was white," she says. There were a "fair few colored in Preston Street, very few ... maybe two or three."

This would change as neighborhoods once racially homogenous became a bustling mix of minorities and Europeans immigrants during a wave of immigration in the 1920s.

Many who came to Philadelphia during that period settled in the western part of the city. This included Jewish immigrants who, like blacks, faced discrimination and abuse. These tensions were amplified by growing economic difficulties as the nation settled into the Great Depression.

But the country began moving toward a more integrated society. In 1948, President Harry Truman put an end to segregation in the military. Six years later, the Supreme Court outlawed school segregation. And 10 years after that, President Lyndon Johnson signed the landmark Civil Rights Act to make segregation illegal nationwide.

Henderson's daughter, Fanny Fisher, says she witnessed a cultural shift during her school years. "In 1956, when I was in West Philly High School, it changed," she says, describing how people from different backgrounds began to attend parties and proms together.

"Before that, it was a little bit prejudiced," Fisher says. "When I was young, an African family came to our town and we just laughed at them ... not realizing the culture they brought to us."

She says she rarely saw Chinese people early on. Then, she says, "all of a sudden, they start migrating and we had to get used to the culture. It didn't take us long because we had dynamic teachers and they talked about the different groups — what they brought, who they were, how proud they were. And that made a difference."

Despite the increased diversity, Philadelphia still faced racial tensions. There was a growing division between police and the black community, which sometimes escalated to rioting.

"It was disappointing, you know, to have the riot," Fisher says. "But after a while, we just overlooked it."

The city's demographics shifted in the 1970s, spurred partly by what became known as "white flight," as white families fled cities in droves and moved to rapidly growing suburbs.

But Anna Henderson's family says that even in those difficult times, people could still find community spirit in the city's neighborhoods.

"Everyone looked out for each other," Fisher says. "Now, you're very afraid. We don't even know most of the neighbors on the block. ... It's new people moving in all the time."

There are many reasons why people have flocked to the city in the past century. Many came to escape slavery, lynchings and persecution. And although the city still grapples with violence and gun crime, it also has a legacy of people who epitomize what it means to be an American.

Reflecting on what it means to be an American today, Fisher says she used to believe that it required being born in this country. Now, she says, "you don't just have to be born here. It's what you bring to it and what you put into it, and you feel like you're an American."

Fisher's daughter, Toby, says an American "is the epitome of what the Commandments say: Love thy neighbor as thyself."

"You embrace your neighbor, and what you have is for your neighbor as well," she adds. "You're not trying to step on each other, not trying to take other's things away. Lately, there have been a few shootings and these people don't value life. An American values life, to me."

Her 108-year-old grandmother puts it more simply. Americans, Henderson says, are people "who look out for each other, no matter what color or kind."

This story was produced by Gemma Watters and edited by Jenni Bergal.