Accessibility links
Wild Horses May Face Death Sentence With the price of hay up and adoptions down, the government may begin euthanizing wild horses. There are currently about 30,000 of them in federal holding centers; a number wild horse advocates blame on careless management. 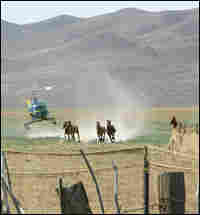 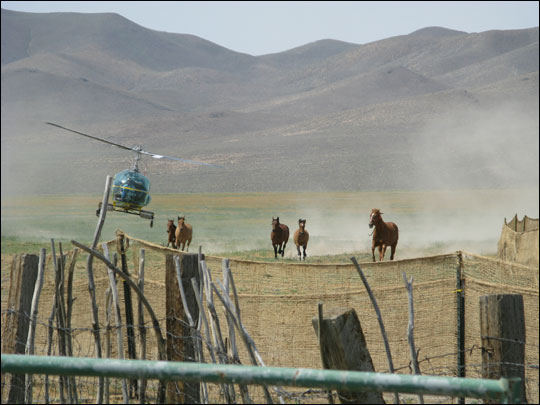 About 100 miles north of Reno, a chopper pilot herds wild horses into a funnel-shaped trap. The lead horse is a "Judas horse," trained to lead the others into the final approach. 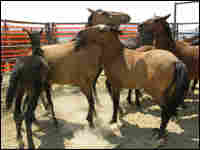 Recently corralled horses jostle for position. In the wild, they stick to their own family bands. Captured, they are suddenly forced to reestablish a social hierarchy. John McChesney/NPR hide caption 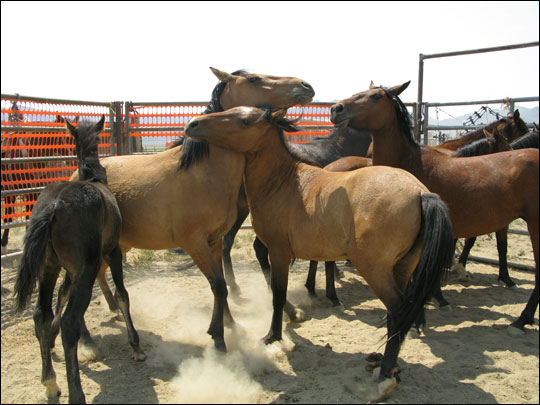 Recently corralled horses jostle for position. In the wild, they stick to their own family bands. Captured, they are suddenly forced to reestablish a social hierarchy. 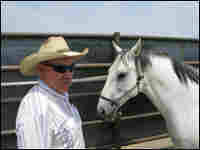 Wranglers, employed by the Bureau of Land Management, are tasked with organizing thousands of wild horses every year. John McChesney/NPR hide caption 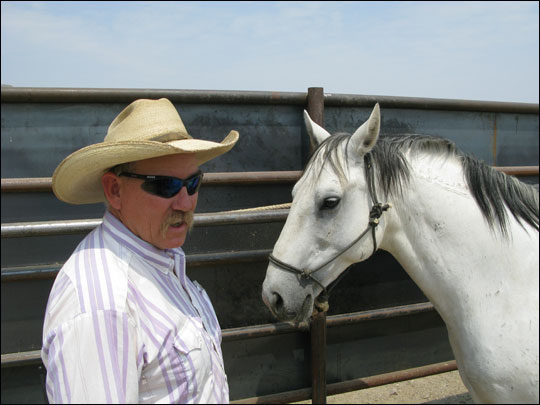 Wranglers, employed by the Bureau of Land Management, are tasked with organizing thousands of wild horses every year. 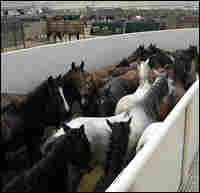 This steel-walled channel at one of BLM's adoption centers leads to a veterinarian station where horses will be vaccinated, de-wormed and branded. John McChesney/NPR hide caption 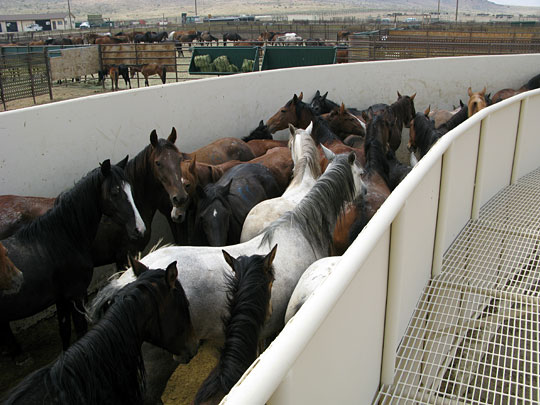 This steel-walled channel at one of BLM's adoption centers leads to a veterinarian station where horses will be vaccinated, de-wormed and branded.

With the price of hay up and horse adoptions down, a federal agency may begin killing wild horses to deal with surplus numbers. Letting evolution take its course doesn't cut it these days, the Bureau of Land Management says, prompting wild horse advocates to rally around this symbol of the old West.

On a recent afternoon, a group of journalists and BLM officials gather in a mountain-framed valley about 100 miles north of Reno, Nev. Someone whispers, "here they come" and over a mile a way a small plume of dust can be seen against sage-covered mountains, followed by flashing helicopter blades.

Soon dark dots emerge in the valley, then flowing manes and tails, as the chopper pilot herds the horses into a funnel-shaped trap.

A wrangler releases a so-called "Judas horse," who has been trained to lead the wild ones into the final approach to the trap. The captives mill about, wild-eyed and confused. They look sleek and fit.

Suddenly there's a "whack" — as a mama rears up and protects her foal with a double-hoofed kick to an encroaching mare. It's one of the ways the new social order is solidified.

"There's a social hierarchy here, you know different family bands and now we've got 'em all mixed together in this kind of situation where they're getting kind of rustled around," explains wild horse specialist Glenna Eckel of the BLM.

The federal agency is responsible for managing about 250 million acres of public lands throughout the West. "Protecting, managing and controlling wild horses" falls under these responsibilities, and every year the organization captures about 10-12,000 horses, about half of them in Nevada alone. Not enough, according to ranchers; too many, according to animal rights activists.

"Yeah, horses die. But before all that happens you've potentially ruined your soils, you've destroyed your plant communities," she explains. "The wildlife and the other critters" — meaning deer, elk and cattle — "that rely on this country are probably long-dead or moved out of the country ... it's a bigger, more complex picture than just horses."

But once they are captured, BLM faces another dilemma; what to do with the horses. Currently there are about 30,000 in holding facilities; nearly equal to the number left in the wild.

Adoption is certainly the most palatable option. At the BLM's wild horse adoption center in Palomino Valley, just north of Reno, horses thrash about in a steel-walled channel, which leads to a veterinarian station where they will be vaccinated, de-wormed and branded with a cold iron dipped in liquid nitrogen.

The transition to captivity comes with its risks. Last year the center lost 180 of about 1,000 horses to salmonella; accustomed to feeding on brush, bacteria multiplied in their stomachs when they were switched to hay.

Adding to BLM's fiscal woes, the cost of hay doubled in Nevada in the last year.

The real problem however, is that the horses aren't going anywhere.

"Our adoption record is clearly down," says Suzie Stokke of the Nevada BLM. "It's been on a downward trend for the last decade. We used to adopt about 8,000 animals annually. Certainly the economy, fuel prices, hay prices, all those things are having a factor in terms of our adoption market."

So the bureau is looking at unpopular options, such as "sale without limitation" — a euphemism for selling horses for slaughter — or euthanasia.

"To use euthanasia as a convenience to cut down numbers of healthy horses — to me, the public's not going to stand for it," insists Dr. Michael Kirk, an equine veterinarian with the Nevada Commission for the Preservation of Wild Horses.

He says euthanasia should only be used to prevent suffering. Chris Heyde of the Animal Welfare Institute agrees and points a finger back at the BLM.

"The reason we're in this position is simply because of horrendous management of the program by the Bureau of Land Management. We've been screaming about this for decades — that the system is broken and sadly in the last 10 years, it's gotten even worse because of their proposal to do mass roundups."

Heyde says the BLM has a built-in conflict of interest; the agency is the tool of cattlemen who graze cows on the same public land used by wild horses.

BLM and others are no doubt counting on public pressure to increase the budget for care of this national symbol. Meanwhile a lot of fine horses remain in BLM corrals, waiting for someone to adopt them.