Accessibility links
Etude For Squeaky Toy, Other Compositions Today's young composers are breaking out of old stereotypes. At the Yaddo Colony for artists and writers in Saratoga Springs, N.Y., Carl Schimmel uses squeaky toys and whoopee cushions in his work. 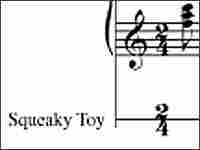 View A PDF Of Music Written For A Squeaky Toy

'As Fast As Possible'

Performed by Taimur Sullivan on alto sax and Inara Zandmane on piano.

Today's young composers are often quite different from the stereotype of tuxedoed men adored in concert halls or immortalized on marble busts.

Consider the young composers who work at the Yaddo colony for artists and writers in Saratoga Springs, N.Y.

Carl Schimmel uses squeaky toys and whoopee cushions in his work. And Greek composer Kostis Kritsotakis is writing a concerto for the mandolin, something never done before.

Schimmel, 32, holds advanced degrees from Yale and Duke in music composition; his music has been performed from Alaska to Japan. He loves to use humor in his work — as he does in a piece played by Taimur Sullivan on the alto saxophone and squeaky toy. It's called "As Fast As Possible," from a work called Elemental Homunculi — Latin for "little man."

Kostis, who teaches in Philadelphia, had his work performed by the Albany Symphony Orchestra this past spring. He says this is a rich time for young composers, in part because the atonality of the the avant-garde movements of the 1960s and '70s has reached its endpoint.