Accessibility links
Protesters Mob British Embassy in Tehran Iranian protesters crowd around Britain's embassy in Tehran, urging a trial for the 15 British sailors and marines Iran holds. Britain's defense secretary says the nations are in communication on the matter of the sailors.

Iranian protesters mob Britain's embassy in Tehran, urging the government to try the 15 British sailors and marines Iran holds. Britain's defense secretary says the nations are in communication on the matter of the sailors. Ken Pollack, an analyst with the Brookings Institution, offers his insights in a conversation with Debbie Elliott. 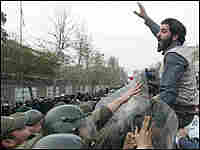 Iranian riot police prevent hardline students from approaching the British embassy in Tehran during a protest Sunday. The students are demanding the trial of 15 British sailors and marines. Behrouz Mehri/AFP/Getty Images hide caption 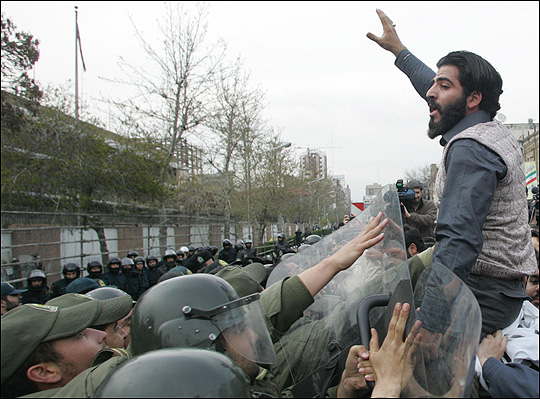 Iranian riot police prevent hardline students from approaching the British embassy in Tehran during a protest Sunday. The students are demanding the trial of 15 British sailors and marines.

President Bush added his voice to the chorus demanding the immediate release of 15 British sailors and marines who are in Iranian custody. Those members of the British Royal Navy have been held for more than a week. Iran accuses them of straying into its sovereign waters. British officials have vehemently denied this, though British Foreign Secretary Margaret Beckett said Saturday the nation "regrets" the impasse. But Iranian President Mahmoud Ahmadinejad has called the British response "arrogant" and insists on an apology.

Roxana Saberi, a reporter based in Iran, speaks with Liane Hansen.

How is the British statement of regret being received?

How are ordinary Iranians responding to this crisis?

There has been a mix of reactions. Hundreds of hardline students have been protesting in front of the British embassy in Tehran, shouting "death to Britain." They've thrown a few small firebombs, which are pretty harmless, at the British embassy. Many Iranians do believe that the Britons trespassed into Iranian waters, as their government says. Some of them say that their country had the right to capture the marines and sailors and should not free them until London apologizes. But others say even if the capture was legitimate, holding onto the Britons for this many days is only going to increase international pressure on their country. And still others don't believe the Britons were in Iranian waters, and that Iran is just playing political games.

There have been conflicting messages coming out of Iran about who has real influence over the fate of these British sailors. Who does? How about President Ahmadinejad?

Well, I think the president is one important voice, but he's not the most important. And one reason is that he was pretty silent the first few days after this incident happened. It's interesting too, that the secretary of the Supreme National Security Council spoke out first on the subject. The president waited until just a couple of days ago. He may have wanted to show that he didn't orchestrate the capture of these British sailors, but that the whole nation was behind it. I think Ahmadinejad is one important voice among many, but of course the final decision maker will be the Supreme Leader.

Earlier in the week officials suggested that the sole woman among the captives would be released. Is that still a possibility?

The foreign minister has said that the sole woman — her name is Faye Turney — would be released soon. Then another top official said shortly afterwards that because of London's harsh rhetoric, her release could be suspended or delayed. I think Iran had wanted to show that it holds a special respect for women and it's still possible that she could be released before the others. But as this dispute continues, I think it's more likely they'll all be released together.

Is the prospect of a trial likely? At least one Iranian leader has said that they could face a trial for their actions.

Iran's ambassador to Moscow did say — was reported as saying — that the Britons could face trial if there's enough "evidence of guilt." Then later he was reported as denying that he had made those remarks and he said that his comments had been incorrectly translated. I think it's pretty doubtful that the Britons will be put on trial. Likely, Iran wants to resolve this through diplomacy. I think Tehran wants an apology and probably in the end, their main decision makers will decide that it's better to finish this sooner rather than later. Also, they've sent a message to the international community that Iran is strong, and that if pressure on Iran increases, Tehran will not step down.