Soraya Sarhaddi Nelson talks about the trip on 'Morning Edition.' 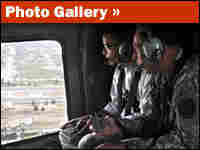 Obama's Trip to the Middle East

Barack Obama met with Iraq's prime minister and U.S. military commanders in Baghdad on Monday. The meeting came as Iraq's government seemed to embrace parts of Obama's plan for withdrawal of U.S. troops.

Obama and Prime Minister Nouri al-Maliki did not discuss Obama's pledge to remove U.S. troops within 16 months, said Iraqi government spokesman Ali al-Dabbagh. However, al-Dabbagh said the government hoped U.S. troops would leave in 2010 if the level of violence does not increase again.

"We cannot give any timetables or dates, but the Iraqi government believes the end of 2010 is the appropriate time for the withdrawal of (U.S.) forces," Dabbagh told reporters.

The timetable for withdrawal has become a key issue in the presidential campaign. More than 145,000 U.S. troops are now in Iraq.

On Monday, the White House said it does not expect to finish an agreement on a long-term security pact with Iraq by the end of this month. The Bush administration wanted to wrap up negotiations by July 31 on an agreement that would dictate the role of U.S. troops once a United Nations mandate expires at the end of the year.

"I don't think that we'll be able to finalize this agreement by next Thursday. We're working towards it, but it might take a few more days after that," said White House spokeswoman Dana Perino.

Perino tried to put the best face on Iraqi suggestions that U.S. troops could leave by 2010, saying it shows there is enough progress on the ground that the two sides can talk about an "aspirational time horizon."

Obama, who is visiting Iraq as part of a U.S. congressional delegation, was greeted at Baghdad's airport by Gen. David Petraeus, the U.S. military commander in the country. The two were scheduled to hold formal talks later.