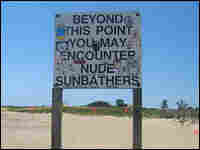 There have been nude bathers at Gunnison for years, even before it became a clothing-optional beach. Margot Adler/NPR hide caption 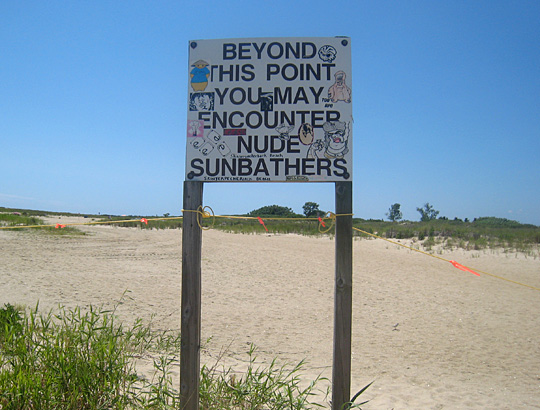 There have been nude bathers at Gunnison for years, even before it became a clothing-optional beach.

Sunbathers here are protective of their little piece of paradise — and their privacy.

When it was a military base, the soldiers — all men — would skinny dip, according to Dale Distasio, president of Friends of Gunnison. The group is composed of the beach's fans, who also try to protect naturist recreation.

When it opened as a clothing-optional beach in the mid-1970s, a big crowd might be 20 people.

Things have changed since then, says Bob Gaestel, a retired automotive technician, who is known fondly as the Mayor of Gunnison Beach because he has been coming here since the beginning.

"It's grown and grown and grown," says Gaestel, who now only comes on weekdays when it's less crowded. The parking lot on a weekend afternoon is maxed out.

Recently, Manhattanites have been able to take the SeaStreak Ferry (no pun intended) to the beach. It's a fast, traffic-free ride, but at $43 round trip, it's expensive. Most people drive.

It seems like every race and age is on the beach — though most people seem older than 50. You see a few smokers. There are also people reading, sunbathing, even playing volleyball.

On a recent weekend day, about half the people on the beach are nude, one quarter are topless, and the rest are wearing bathing suits, shorts and beach wraps. But the thing that's most striking is how easy it is to strike up a conversation.

"When you are not wearing clothes, you have nothing to show everybody how much you make and what you do for a living," Distasio says. "The Nike sneakers are off. The $300 earrings got left at home, and it's a terrific equalizer.

While beachgoers here might be willing to strike up a conversation, they don't want to be interviewed by the media — and they certainly don't want to give their names.

"People think that if you take your clothes off, there's got to be sex involved. Publicity brings a lot of gawkers, people who want to come down here, and make my lifestyle their source of entertainment for the day," Distasio says.

And every once in a while, a lifeguard or a park ranger has to throw someone off the beach for acting inappropriately.

Mayor Bob advises: Get a room. You can't do it here.

Taking pictures without permission, for example is a no-no.

If gawkers understood that the average nudist could be a member of AARP, they might stay home, Gaestel says.

"I think that you let a lot go once you hit a certain age. You don't care what people think about you," Gaestel says.

The one group you don't see here are teens. Distasio says that's just human nature. They are developing, she says, and besides, they don't want to see their moms and dads naked.

"Then, somewhere in their late 20s and late 30s, they come back and their kids stay until they are 12," she says, laughing.