Accessibility links
Stravinsky Gets His 'Rite: Remixed' In a concert presented by the Wordless Music Series, the collective of composers and musicians known as the Metropolis Ensemble presents The Rite: Remixed. Sounds from the acoustic musicians were torn apart in real time by laptops, adding riotous new sounds to Stravinsky's manic piece.

Stravinsky Gets His 'Rite: Remixed'

Stravinsky Gets His 'Rite: Remixed'

See Photos from the Concert 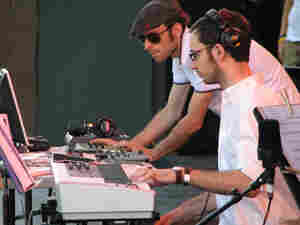 In an interview with host David Garland, Greg Saunier of the forward-thinking indie-rock band Deerhoof admits that he's been borrowing ideas from Igor Stravinsky. So it's hard to imagine a better pairing than this Wordless Music Series concert combining Deerhoof with a wild re-imagining of Stravinsky's The Rite of Spring by the Metropolis Ensemble. The unlikely playbill was recorded live by WNYC at the Prospect Park Bandshell in Brooklyn, N.Y., as part of Celebrate Brooklyn.

Opening the night with a new composition by Ricardo Romaneiro, soprano Hila Plitmann sang Two-Part Belief, a voice work that was half-sung and half-spoken. Musicians stood behind her on laptops, manipulating and layering her voice in various ways.

A full brass and percussion ensemble then took the stage for The Rite: Remixed, a new take on Stravinsky's revolutionary The Rite of Spring. Sounds from the acoustic musicians were torn apart in real time by laptops, adding riotous new sounds to the already manic piece.

Founded in 2006 by conductor Andrew Cyr, the Metropolis Ensemble performs and commissions new music from some of today's most promising new composers , such as Avner Dorman. The flexible group features a revolving cast of the finest young chamber musicians around, and performs new works alongside the most influential pieces of the 20th century.