Accessibility links
Madeleine Albright Hails Karadzic Arrest Former Bosnian Serb President Radovan Karadzic has been arrested. He has been twice indicted for genocide for the siege of Sarajevo and the massacre Muslims at Srebrenica. Former Secretary of State Madeleine Albright calls the arrest "extremely significant."

Former Bosnian Serb President Radovan Karadzic has been arrested. He has been twice indicted for genocide for the siege of Sarajevo and the massacre Muslims at Srebrenica. Former Secretary of State Madeleine Albright calls the arrest "extremely significant."

Radovan Karadzic is in custody in Serbia. The man who led the Bosnian Serbs in the 1990s has been charged with genocide by the international war crimes tribunal in The Hague. His arrest was announced by the office of Serbian president Boris Tadic.

For more than 10 years, Karadzic was a fugitive from international justice. In the view of many people, he owed his freedom less to cleverness at evading capture than to a lack of political will to capture him.

Madeleine Albright was ambassador to the United Nations and later secretary of state in the Clinton administration. She joins us by phone.

And let me ask you, so many years after the mass murders in Sarajevo and Srebrenica, how significant is the arrest of Karadzic?

Ms. MADELEINE ALBRIGHT (Former U.S. Secretary of State): It's extremely significant, Robert, because he really is the person that was behind the systematic ethnic cleansing murder of several hundred thousand Bosnians, and it does show that justice will prevail. But as you pointed out, a lot of this is due to the fact that the Serbian government with President Tadic did show the political will to get this done.

And it's a big moment for the Serbian people who deserve to become a part of Europe and to end the isolation, and this is one way to get out of their pariah status.

SIEGEL: Conversely, though, do you think that Radovan Karadzic could have remained free all this time if in prior years there would actually been a sincere desire in Belgrade to have him arrested?

Ms. ALBRIGHT: No. I think that he clearly was able to keep hidden because there was not the political will. And frankly, certain elements of the government were afraid of some of the other more radical groups, and there was not the kind of sense that this had to be done.

SIEGEL: You mentioned this would be a way for Serbia to end its pariah status. What we're talking about is the possibility of membership in the European Union; that seems to be the great inducement here, no?

Ms. ALBRIGHT: You know, when we came into office, the Berlin Wall had come down, and the first President Bush had said that he wanted to a see a Europe whole and free, and the Clinton administration was following up on that. And the missing piece of the puzzle was the Balkans. So, systematically, there has been an attempt to integrate various parts of the former Yugoslavia into Europe.

And Serbia was really not eligible to become a full member because of the fact that there was this criminal element that was hiding the person that has been accused of perpetrating all the crimes that created such a hideous atmosphere in the Balkans where so many people were murdered.

SIEGEL: The trial of the late former Serbian leader, Slobodan Milosevic, went on for years. Is there something wrong with the war crime system that says, yes, genocidal demagogues will pay for their crimes but payment might be deferred for 20 or 25 years?

Ms. ALBRIGHT: Well, it's a slow process, I agree with you. And I think that Milosevic was very clever in the way that he played the system, and would pretend that he was sick or had endless defense arguments. I would hope that the war crimes tribunal prosecutors and the judges would have learned a lesson from that.

But I have to tell you, it is important for a fair system to go forward. Because part of what we're all trying to prove is that it is - justice is important, the rule of law is important, that you can't have arbitrary acts, and you certainly can't get away with genocidal murder.

SIEGEL: Well, Secretary Albright, thank you very much for talking with us once again.

SIEGEL: Former Secretary of State Madeleine Albright speaking to us from Washington, D.C. 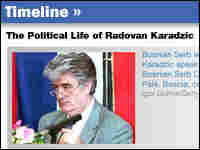 Indicted on charges related to war crimes, Radovan Karadzic had been living as a fugitive for more than a decade. View a timeline of events in his life that led him to go into hiding.

Former Bosnian Serb President Radovan Karadzic has been arrested in Serbia after more than a decade-long manhunt, officials said.

Karadzic has been twice indicted for genocide. He is accused of playing a key role in the 43-month siege of Sarajevo, which claimed 12,000 lives, and of orchestrating the 1995 massacre of some 8,000 Muslims at Srebrenica, the worst atrocity in Europe since World War II.

"Karadzic was located and arrested," a statement from the office of Serbian President Boris Tadic said Monday.

Karadzic was detained and taken to see judges of the war crimes court, the statement said.

A statement from Serge Brammertz, the chief prosecutor of the International Criminal Tribunal for the Former Yugoslavia, congratulated "Serbian authorities, especially the National Security Council, Serbia's Action Team in charge of tracking fugitives and the Office of the War Crimes Prosecutor, on achieving this milestone in cooperation with the ICTY."

"He really is the person who was behind the systematic ethnic cleansing — murder — of several hundred thousand Bosnians," she says. "It does show that justice will prevail."

Serbia's previous governments were often blamed for not having the political will to arrest Karadzic.

"He clearly was able to keep hidden because there was not the political will," Albright says. "And, frankly, certain political elements of the government were afraid of some of the other more radical groups, and there was not the kind of sense that this had to be done."

"What NATO couldn't do for 10 years, apparently the crack Serbian police did," NPR's Tom Gjelten noted Monday, in an on-air conversation with Robert Siegel.

The arrest of Karadzic is a major coup for international authorities and is a boost for the new Western-leaning Serbian government.

"The most important thing that has changed is the political climate in Belgrade," Gjelten says. "We now have a new government there which is determined to move closer to Europe."

The White House praised the arrest, calling it "an important demonstration of the Serbian Government's determination to honor its commitment to cooperate with the International Criminal Tribunal."

The EU said the arrest "illustrates the commitment of the new Belgrade government to contributing to peace and stability in the Balkans region."

Tadic's office said Karadzic has been taken before the investigative judge of Serbia's war crimes court. The next step would be for Karadzic to be extradited to the tribunal in The Hague, when he would be the 44th Serb suspect extradited.

Karadzic has been charged with genocide, extermination, murder, willful killing, deportation, inhumane acts, and other crimes against Bosnian Muslims, Bosnian Croats, and other non-Serb civilians in Bosnia and Herzegovina during the war that lasted from 1992 to 1995. Specifically, he is charged with six counts of genocide and complicity in genocide, two counts of crimes against humanity, as well as violating laws of war and gravely breaching the Geneva Conventions