Accessibility links
'X-Files' Movie A Thriller? Don't You Believe It More sentimental than spooky, the second X-Files film asks not whether you believe in alien life or vast government conspiracies, but if you believe in life after love. 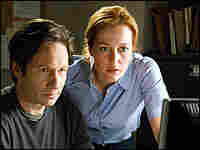 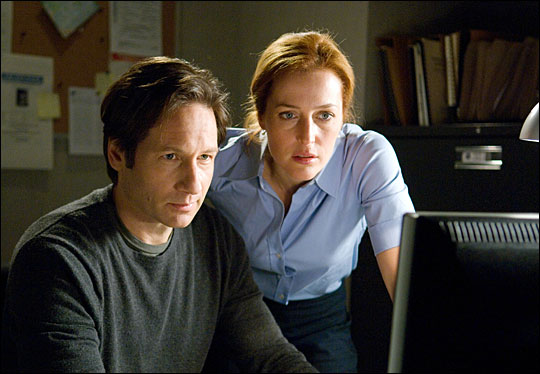 The X-Files: I Want to Believe

Rated PG-13: Alien abductions too creepy for TV-PG, but not spooky enough for TV-14. 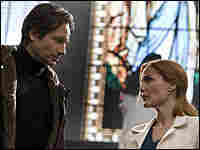 When not protecting the world from imminent alien invasion, Mulder and Scully revisit the sexual tension that the show always kept on a simmer. Diyah Anderson/Twentieth Century Fox hide caption 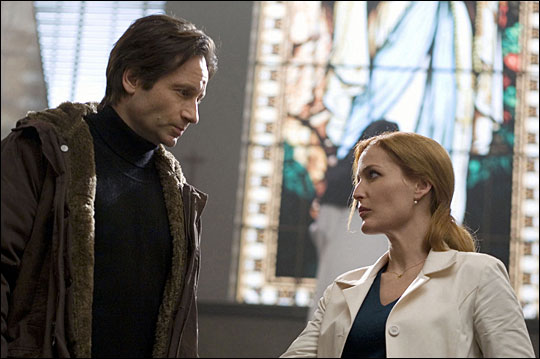 When not protecting the world from imminent alien invasion, Mulder and Scully revisit the sexual tension that the show always kept on a simmer.

The summer's latest big-screen diversion, The X-Files: I Want to Believe, announces in its very title a blunt, even poignant, admission of hope in the face of daunting obstacles.

In this case, the person who wants to believe is, first and foremost, writer-director Chris Carter. Fifteen years have passed since Carter unveiled The X-Files, a cult-hit TV show about FBI agents investigating the paranormal, and he isn't wrong to pray that anyone still cares.

There is, of course, a hard-core fan base of X-Files devotees who can be counted on to obsess over the continuing adventures of agents Fox Mulder (David Duchovny) and Dana Scully (Gillian Anderson) — at least until the vast governmental conspiracy succeeds in abetting a diabolical extraterrestrial plot to take over the planet.

Not immune to the show's enchantments — OK, full admission: I was an X-Files dork — I, too, wanted to believe, and the movie does manage to scratch an itching desire to slip back into the world of Mulderian wisecracks and Scullyish skepticism.

I was also hoping it might be, you know, a good movie, possibly scary, perhaps exciting, maybe just maybe a freaky little thriller worthy of the show. But faith in the Files has proved, alas, to have its limits.

I'm going to skip as far around the plot as possible to honor the clever way it builds up in discrete, spooky pieces, allowing your imagination to slowly puzzle over the big-picture menace.

Also because the central conceit is, once revealed, ridiculous B-movie nonsense — an embarrassing bundle of lurid cheesiness that might have served for one of the satirical, tongue-in-cheek episodes of the series.

Carter appears to take it all quite seriously, though his real interest is obviously not with the missing limbs, the forensic enigmas and the child-molesting, potentially psychic Catholic priest (Billy Connolly) who may or may not hold the key to unlocking his laughable mystery of Russian organ harvesters in backwoods Virginia.

No, Carter's heart is with his heroes. The X-Files: I Want to Believe makes for a lousy thriller but a decent relationship picture.

The movie wastes no time dragging Mulder and Scully, retired from the FBI at the close of the series, back into action. And if it lingers way, way too long on their conflicted feelings about facing "the darkness" again, it does so with a lived-in sense of who these people have become.

Anderson, an enthralling screen presence whose radiant poise and intelligence remain undiminished, updates her Scully into that rarest of things: the complex, credible woman in a Hollywood picture. Whether or not Scully's reluctance to saddle up again dovetails with a resignation, on Anderson's part, about returning to the X-Files fold, the character's crisis of conscience is palpable and moving.

Mulder, the eternal adolescent, is of lesser interest, and Duchovny's characteristic nonchalance further erodes his heroic role in the narrative. But there are some beautifully played scenes between the two — just the kind of sexy, nuanced stuff the fans slathered over during the show's heyday, tempered now with a more bittersweet chemistry.

As for thrills and chills, the scariest thing about the movie is a strain of ugly, unexamined homophobia attached to the villains: Psychopathic foreigners lurking in the sticks like slasher-flick bogeymen, they're sexual deviants who prey on the status quo (read: middle-class, heterosexual white women).

Carter maximizes their otherness in every possible way as a thematic contrast to the Mulder-Scully relationship. But he does so in terms so exploitative that he actually uses gay marriage as a trope of the horrific. I want to believe he's better than that.