Accessibility links
Open Up The Vice Presidential Selection Process Commentator David Weinberger argues the public could help vet potential vice presidents if the presidential candidates would open a public forum on the Internet. He says he'd love to see a blog by the search committees. 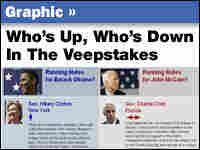 No one is exactly sure who first said that we're better off not knowing how either sausages or laws are made, but as a long-time vegetarian, there's one particular sausage I think we all should see: how the vice presidential candidates are being picked.

Not the whole way. We don't need to see what's under every stone the vetting process overturns, and the committees doing the deciding absolutely need plenty of time behind closed doors to talk frankly.

But we have this new connective medium, the Internet, which Sen. Obama's campaign has been using with extraordinary effectiveness. Sen. McCain's own daughter, Meghan, has a blog.

So, why not take advantage of the Net? Instead of relying on the media to convey news about the vice presidential search, the candidates could use the Internet to enable a great public conversation. For example, they could create a place on their homepages where we the people can talk with one another, raise issues, contribute ideas, with the selection committee members jumping in. They can argue, they can push back, but most of all they would engage.

They could also share some of the materials they're studying about the people on the list. Nothing private. Keep it positive. But, "Here's this candidate's voting record and military record. Did you know this one has a medical degree?" Give us an opportunity, and we'll post sources on our own. We'll tell the stories about our own encounters with these potential vice presidents. If the campaigns are worried about lewd name-calling, wild rumor-mongering or racist invective, they can put a moderator in place.

I'd love to see a blog by the search committee members themselves. It might be pretty tame; although, at some point, the campaigns might actually trust us to handle a conversation that admits the political calculations everyone knows are being made anyway: This person's too southern or northern, too weak or belligerent, too young or too old, from a state we don't care about or just funny-looking.

The one thing I wouldn't do is put up a place where we can vote. This is a more nuanced decision than a yes-no popularity vote, and, besides, online polls are too easily manipulated. But letting us talk with one another and with the search committee, and maybe even letting the candidates on the VP list into the conversation could only make the decision wiser and our democracy stronger. Why have an Internet if you're not going to use it?

David Weinberger is a fellow at Harvard's Berkman Center for Internet and Society.