Accessibility links
'Brideshead': A Shorter Visit To A Grand Old Place Purists, fear not: The new film of the Evelyn Waugh novel is visually sumptuous and largely stays true to its source. And Bob Mondello says this two-hour take on the classic tale provides new insights on character.

Listen
'Brideshead': A Shorter Visit To A Grand Old Place 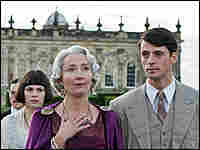 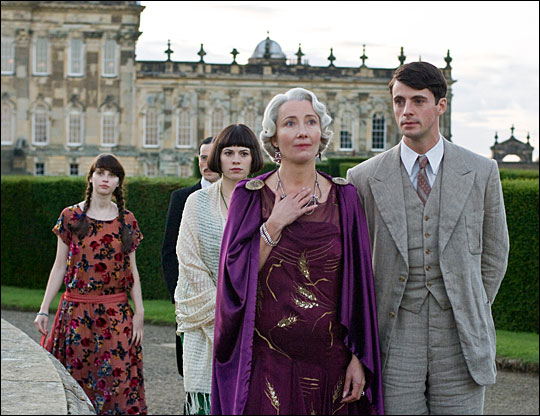 As the doyenne of the Brideshead estate, Lady Marchmain (Emma Thompson) monitors the relationship between Charles (Matthew Goode) and her daughter Julia (Hayley Atwell).

Rated PG-13: Ewardian-era transgressions involve nothing that would alarm the FCC. 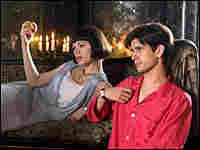 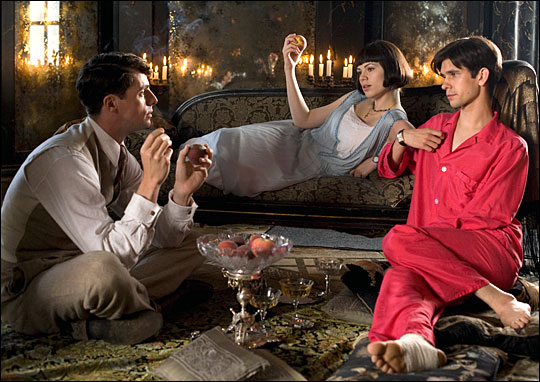 Wielding the fruit of temptation, the siblings Flyte (Hayley Atwell and Ben Wishaw) draw Charles into their world.

Cineplexes this summer look a lot like classic television: Get Smart, Sex and the City, and Speed Racer all expanded half-hour TV shows to something closer to two hours.

Now comes Brideshead Revisited, facing the opposite challenge: reducing an 11-hour original to two hours. And the filmmakers did the sensible thing: They went back to the book.

Whose story proper, as you may recall, begins at Oxford: Charles Ryder is there, between the wars, because his father thinks it's a good way for him to get ahead in the world. Lord Sebastian Flyte is there for entertainment.

And before long, he's entertaining not just himself, but Charles, too — taking him out for wine and strawberries on a perfect romantic afternoon, or off to visit his stately home. And reluctantly, when Sebastian can no longer avoid it, to have dinner with his beautiful sister Julia and their frighteningly composed mother, Lady Marchmain.

This is a world of dinner jackets and evening gowns, casual jaunts to Venice and Morocco. It's about elegance, style, money and perhaps too heady a mix of drink, religion and intrigue.

Evelyn Waugh's novel burned the dalliances and religious conflicts of his classy characters into the consciousness of one generation of romantics; the miniseries did the same for another. So why revisit Brideshead Revisited? Surely not just to annoy purists — as much fun as that can be.

The Waugh fundamentalists have been up in arms for months now over rumors that God, homosexuality and Sebastian's teddy bear were being left on the cutting room floor this time — untrue rumors, as it happens. And there have been screams of outrage that "they're tampering with a masterpiece — what could they be thinking?"

Was The Mini A Masterpiece? Mostly In Memory

Well, I've just re-watched the masterpiece, and I know one thing they had to be thinking: It's beautifully acted, but it was made with 16-millimeter cameras, in an age of much smaller TV screens. By today's standards, it looks really grainy — which is no way to view the titular mansion, played again in the film by Castle Howard.

Then there's the matter of pacing. Is it sacrilege to note that a good three of those 11 TV hours are shots of things like trains chugging, Bentleys arriving, dandies strolling languidly on manicured lawns — lovely stuff, but eminently cuttable, along with that fox hunt, if you want to get to the religious arguments that were Waugh's reason for writing Brideshead.

Director Julian Jarrold and his screenwriters have also found ways to streamline motivations. Their most controversial emendations will be two kisses — one involving Sebastian, the other witnessed by him — that are in neither the miniseries nor the book. They allow the filmmakers to cut to the chase; I won't say how, exactly, but rest assured that when Lady Marchmain wonders, mid-film, about what sort of good time Charles and the siblings Flyte have had for themselves in Venice, the audience will be in a position to answer.

There are things that miniseries true-believers will miss: Laurence Olivier's Lord Marchmain had a deathbed speech on TV that let the aging Shakespearean prove he could still play Henry V lying down. The new film has Michael Gambon, whose career doesn't demand that sort of showcase just yet — so he doesn't get it.

Matthew Goode and Ben Whishaw aren't Jeremy Irons and Anthony Andrews, but they're a nicely matched Charles and Sebastian. You don't particularly sense the passage of two decades in the film, and there's far less of flamboyantly gay Anthony Blanche (or Antoine, as he liked to be called).

Still, if much longer novels can be condensed into effective movies, there's no reason Brideshead shouldn't be. Nor is there a good reason to avoid revisiting a tale that's been told well once: I've seen three dozen Hamlets, and I continue to be surprised at the new wrinkles directors find in that story.

Brideshead Revisited redux isn't a classic, quite, but it does offer a new slant on the characters' motives — and a clearer view of the stately home that gives the film its title. Whether that's enough to prompt a revisit, I'll leave to fans.

In the some broadcasts of this story, we misidentified the actor who played Sebastian in the TV adaptation as Anthony Edwards. It was Anthony Andrews.