Accessibility links
'Step Brothers': A Family Affair Worth Skipping The Talladega Nights team reunites for some rudimentary plotting and an abundance of anatomical humor, courtesy of two whiny man-children: To critic Cynthia Fuchs, that all adds up to "tedious." 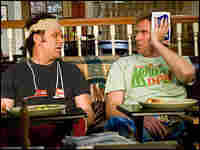 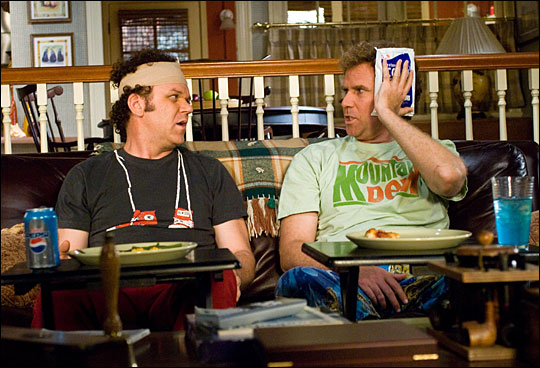 Though Dale (John C. Reilly) and Brennan (Will Ferrell) get their fair share of punches, the viewers fare worse.

Rated R: It takes a lot of penis jokes to get an R rating — and really, were they all necessary? 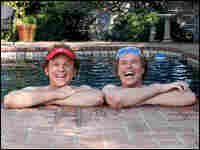 Initially antagonistic, the two are soon united by their love of John Stamos — and their avoidance of adulthood. Gemma la Mana/Sony Pictures hide caption 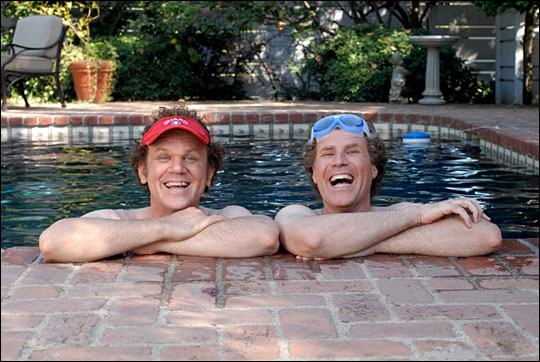 Initially antagonistic, the two are soon united by their love of John Stamos — and their avoidance of adulthood.

"As soon as you close your eyes, I'm gonna punch you square in the face."

With this not-so-sweet good night, Brennan (Will Ferrell) makes painfully clear his rage at new stepbrother Dale (John C. Reilly). Lying on side-by-side beds, their mind-wheels plainly grinding as the camera hovers above, neither can come up with the killer put-down, the one that might ease the pain of having to share his bedroom with a whiny stranger.

Sans such consolation, the man-children can only fume and sputter — which is pretty much what Step Brothers does for its 95-minute running time.

While it's easy to believe that Reilly, Ferrell, and director Adam McKay had such fun making Talladega Nights that they contrived this project to recreate the magic, it's even easier to imagine they didn't spend much time on the contriving part.

The rudimentary plot has Brennan's mom (Mary Steenburgen) and Dale's dad (Richard Jenkins) getting married, and so traumatizing their frightfully spoiled sons. But even as the parents dream of retiring and sailing away on a boat (literally), the boys refuse to give up their juvenile prerogatives. They won't get jobs, clean up after themselves, or move out.

They will, however, bond, which is almost worse than any sort of fighting these social incompetents can manage. The occasion for their collaboration is Brennan's bully of a brother, Derek (Adam Scott), as arrogant, selfish and contemptuous a villain as any high schooler might meet at the prom. The stepbrothers' connection doubles their yuckiness, making them into appreciative audiences for each other's antics.

In this, they mirror the relationship of the film and its audience. Co-produced by Judd Apatow, Step Brothers expands his infamous and incessant focus on boys coming of age (see: Knocked Up or Superbad).

Here, as supposedly grown men indulge in the fantasy of perpetual, consequence-free immaturity, Apatow and company reduce them to walking penis jokes — crude, lewd cartoonish violence piled on top of verbal and visual excess. (References to "hairy balls," images of Brennan's genitals — that sort of thing.).

Most tediously, the women who rotate around the boys (Brennan's therapist, Dale's desperate married lover) look even more miserable and limited than their love objects.

The problem here is not the film's mighty efforts to be audacious, which are to be expected, but their repetition. Ferrell's comedic fearlessness, once refreshing and truly strange, is now looking awfully familiar.