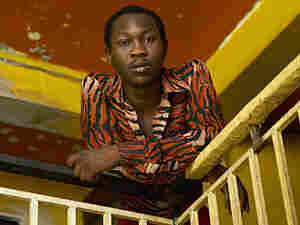 Kuti describes Afrobeat, the music that his father created and named, as the sound that raised him. He says he grew up listening to it everyday, and his father took him and his siblings to all his shows. "Afrobeat is more than just music," he says. "Afrobeat is a whole movement. It's a philosophical movement, it's a political movement, it's a social movement, but most of all — because that's how it's known all over the world — it's a musical movement." When asked how to describe the sound of Afrobeat, Kuti says, "It's the truth. One word. Afrobeat is the truth."

Kuti's album opens with the voice of former Nigerian president Olusegun Obasanjo, bragging about how he made Nigeria better. But "after his 80 years of office, the things are worse than they've ever been," Kuti says. So on the song "Many Things," Kuti sings about people who have no water to drink and nowhere to live.

Today, Kuti says, Africa is dealing with what he calls "second slavery." He describes slavery as people working for nothing. In Nigeria, where about 130 million people of a total population of about 150 million live on $1 a day, Kuti says the lucky 20 million with a salary are "forgetting that we're leaving 130 million people behind in abject poverty."

Fela Kuti was imprisoned and beaten for singing about the same things his son now sings about. The fact that he does not seem to be facing the same sort of pressure from the government may be a sign of progress, but Kuti attributes his relative freedom to his father's tough stance. "You never heard my father moan about it," he says. "Obviously they've learned from that, that brutality is not the way to go. Because you ain't going to shut a man up by locking him up or beating him up if he really believes in what he's saying."

At the same time, Kuti blames the dearth of Afrobeat bands in Nigeria on the government's lack of support for the music. He says it's hard for DJs to play the music on the radio, and people make so little money that they can't think about starting a band without support.

Kuti says that's one of the reasons he's happy his father's influence extended beyond Nigeria. "My father's message is not local. What he stood for was global, and what we discuss is global issues," he says. "They can't stop the movement."