Accessibility links
Lodi Gyari: Standing With The Dalai Lama With the Olympics in Beijing less than a month away, the global spotlight is on China — and its treatment of Tibet. The Dalai Lama's chief negotiator, Lodi Gyari discusses the protests, the Olympics, and the best way for Tibet to push for autonomy. 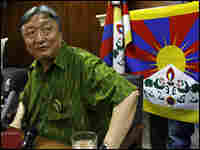 "There should be a certain degree of normalcy (in Tibet)," Lodi Gyari, the head of the Tibetan delegation for talks with China, said at an April news conference in New Delhi. Manpreet Romana/AFP/Getty Images hide caption 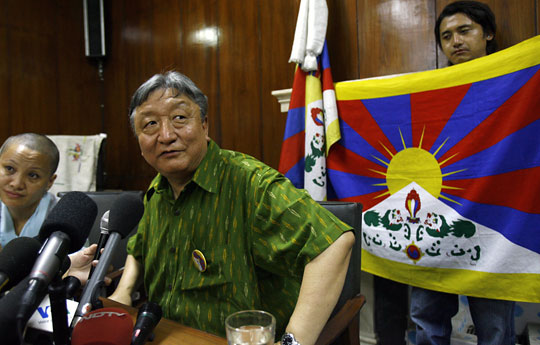 "There should be a certain degree of normalcy (in Tibet)," Lodi Gyari, the head of the Tibetan delegation for talks with China, said at an April news conference in New Delhi.

With the Olympics in Beijing less than a month away, the global spotlight is on China. The host nation's human rights record is under renewed scrutiny, particularly its response to recent unrest in Tibet.

As the Dalai Lama's chief negotiator, Gyari has twice traveled to meet Communist Party officials in Beijing since this spring's widespread protests in support of Tibet's push for self-rule. Those protests, which centered on the Olympic torch's trip to Beijing, also set off counter-demonstrations in China and elsewhere.

And when rallies and demonstrations break out, Gyari said, China's communist government treats them as threats to law and order, often leading to a crackdown.

"This is not going to resolve the issue," Gyari says he told Chinese negotiators at a recent meeting. "The more you suppress, the more [there is] resentment."

Instead, he urged them to accept the Dalai Lama's offer of cooperation with China's leaders.

"We can provide them legitimacy," Gyari said. "But if — and only if — Tibetans are given the opportunity to live in dignity."

Gyari, who was born in Tibet, fled China's takeover of his country when he was a boy in 1959 — the same year the Dali Lama fled Tibet.

"I remember walking to India with only one shoe," Gyari said, "because somewhere on the road I was too exhausted and my one foot got stuck in the mud and when I pulled my leg it came back without a shoe."

The Dalai Lama has said that he is not seeking separation and independence of Tibet. But the Chinese government's unease over more protests led it to demand that the Dalai Lama repudiate any efforts to disrupt the Olympics.

Gyari said the Dalai Lama has done just that.

"Because the Olympics, we certainly believe, is important for the Chinese as a people," Gyari said.

The two sides have agreed to meet again after the summer Olympics.

"This is the great opportunity for [China] to prove" itself, Gyari said. "To prove, one, that China does things by herself, not because of international pressure; two, that they're serious, and they were not doing all these talks for the sake of the Olympics."

Gyari also cited the chance for the Dalai Lama and Chinese President Hu Jintao to prove that they are serious about a mediated solution.

"I think the October meeting is very important," he said.