Accessibility links
GM Works With Utilities On Plug-Ins General Motors is working with utility companies to make sure its next-generation plug-in hybrid has a smooth rollout in 2010. GM is pushing utilities to move forward on so-called "smart-metering."

General Motors is working with utility companies to make sure its next-generation plug-in hybrid has a smooth rollout in 2010. GM is pushing utilities to move forward on so-called "smart-metering."

Plug In, Drive On: The Promise of Next-Gen Hybrids 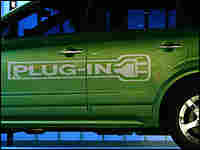 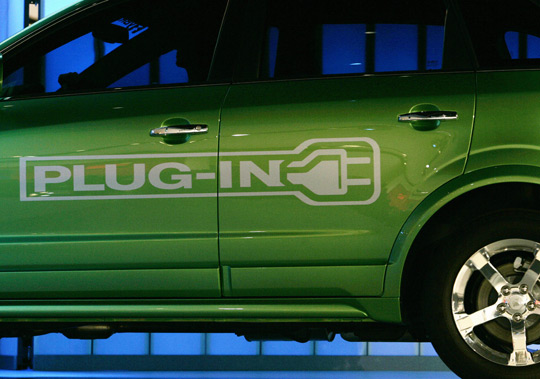 The Saturn Vue plug-in electric concept car is displayed at the North American International Auto Show in Detroit in January.

The collaboration announced Tuesday between General Motors and more than 30 American utility companies may accelerate the introduction of plug-in hybrid electric vehicles.

GM plans to introduce the Chevrolet Volt and the Saturn Vue in 2010. If these cars and others in the works by Toyota and Nissan catch on, consumers stand to benefit from spending less on gas and gaining access to lower-priced electricity to fuel their commutes.

Here's a look at the impact that plug-in hybrids might have on consumers' pocketbooks and the environment.

What are the differences between a plug-in hybrid (PHEV) and a full hybrid, like the Toyota Prius or the Ford Escape?

Full hybrids like the Prius and Ford Escape can start and accelerate, up to a point, without engaging the combustion engine, but they rely on it to charge their batteries. In contrast, CalCars, a non-profit advocacy group, describes PHEVs as "an electric vehicle with a gas-tank backup."

A PHEV is similar to a full hybrid, except that it has an electrical cord that gets plugged into a standard 120-volt outlet to charge the battery. Plug-in hybrids will have larger and longer-lasting battery packs than hybrid cars now on the road. PHEVs, which are still in development, would likely use lithium-ion battery technology similar to that used in consumer electronics to give them a longer electrical charge.

PHEVs are being designed with the goal of providing an adequate electrical charge for a daily commute, somewhere between 20 to 40 miles each day. But designing a battery that carries enough energy for this type of commute is the major challenge facing the plug-in hybrid industry, says Mark Duvall, program manager of electric transportation for the Electric Power Research Institute, an industry research group.

Not likely. A 2007 study by the Electric Power Research Institute and the Natural Resources Defense Council found the potential for reducing greenhouse gas emissions and improving air quality if the use of plug-in hybrid vehicles was widespread.

The study projected that in 2050, there would be more than an adequate supply of grid-supplied electricity for transportation uses. If PHEVs were in widespread use by then, it predicted that greenhouse gas emissions could be reduced by the equivalent of removing 82.5 million passenger cars from roadways. And it suggested that petroleum consumption could be reduced by up to 4 million barrels per day.

How would the car communicate with the electric grid?

Integrating a plug-in hybrid with the electrical infrastructure is the second-biggest technology challenge, after creating an adequate battery, says Duvall. This requires coming up with a strategy of "smart charging," to establish synergy between the electrical grid and the car, he says. Ideally, a PHEV owner would be able to plug in the car whenever, but systems would be in place that prevent the car from charging up except when electricity usage is off-peak.

Utilities are already rolling out something called smart-metering technology, which is essentially a meter that enables someone's residence to relay consumption information back to the utility, so that power companies have the intelligence they need to manage electricity loads. By 2012, all of California will have smart meters in place, Duvall says.

What are the potential savings for consumers?

By charging at night, when many utility companies around the country offer more favorable power rates, consumers may save money. Duvall says it's likely that some utilities will offer consumers an "incentive" to charge at night. There are already special rates in place for electric-vehicle charging at some utilities, he says. PHEVs typically draw the power equivalent of a dishwasher and require a charge of three to five hours.

These vehicles will use two-thirds less gasoline than full hybrids, says Duvall. CalCars estimates that drivers will be able to fill up their "electric tank" for less than $1 a gallon, based on the average U.S. electricity rate.

Not likely. A few decades from now, analysts estimate there will be a 60 percent market share for plug-in hybrids. "It would add 6 to 7 percent to electrical demand," says Duvall. "We can handle most of this with existing capacity if we've got smart charging dialed in correctly."

Philip Krein, an engineering professor at the University of Illinois and an expert in electric and hybrid cars, says excess capacity already exists, especially at certain hours of the day. "To the extent that rates or other incentives can be used to make sure people are charging vehicles at night, there is very little problem," he says. "You just don't want them to be competing with air conditioning during a hot summer day."