Accessibility links
Actress Estelle Getty Remembered Actress Estelle Getty, who played the sarcastic octogenarian Sophia on the long-running television show The Golden Girls has died. She was 84. The show about four female retirees sharing a house in Miami ran from 1985-92. Getty won two Emmys for her role.

Actress Estelle Getty, who played the sarcastic octogenarian Sophia on the long-running television show The Golden Girls has died. She was 84. The show about four female retirees sharing a house in Miami ran from 1985-92. Getty won two Emmys for her role.

And one more note this hour: Actress Estelle Getty died today at the age of 84. She began her career early as a teen doing stand up in the Catskills. But she found her fame late, in her 60s, playing Sophia Petrillo on the television series "The Golden Girls."

BLOCK: Sophia's trademark was the cutting one-liner aimed at the women she lived with.

Ms. BETTY WHITE (Actor): (as Rose Nylund) Sit down, Sophia. You must be exhausted. 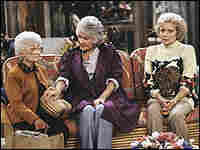 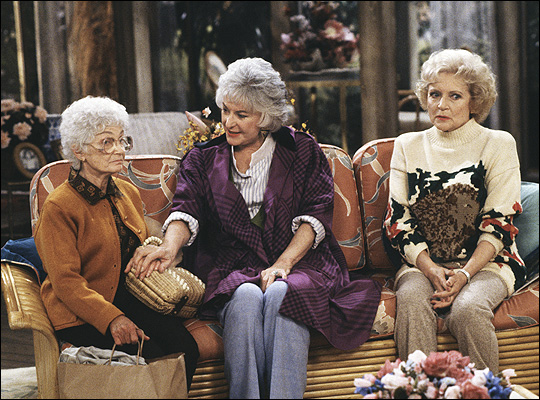 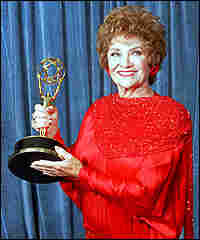 Getty with an Emmy she won in 1988 for playing Sophia. NBCU Photo Bank/AP hide caption 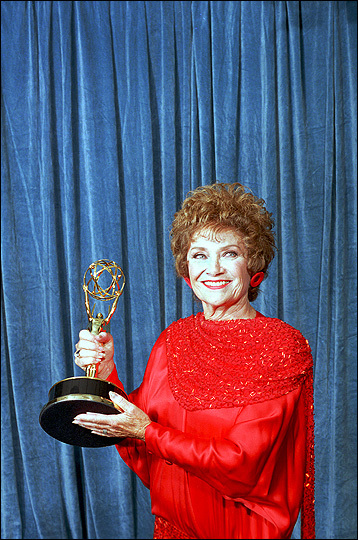 Getty with an Emmy she won in 1988 for playing Sophia. 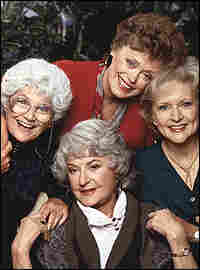 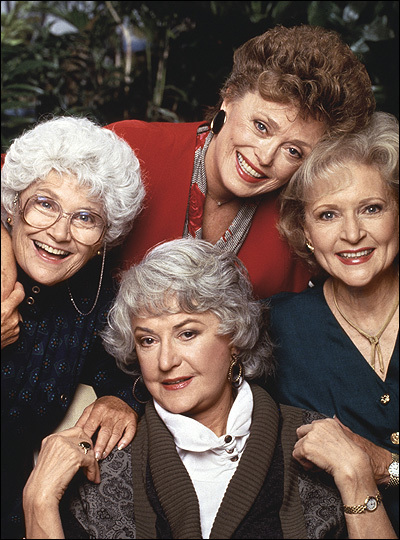 Age, sex and human foibles. All were fair game for Estelle Getty as Sophia. And no one dared ask her a dumb question, either. A sampler of exchanges from The Golden Girls. (Source: IMDB.com)

Rose: Sophia, why are you in such a bad mood?

Sophia: Excuse me, Rose, but I haven't had sex in 15 years and it's starting to get on my nerves.

Dorothy: Hi, Ma. Where are you going?

Sophia: To the boardwalk. I like to watch the old guys rearrange themselves when they come out of the water.

Dorothy: You couldn't sleep either, huh?

Sophia: No, I'm sleeping so good I thought I'd come try it in the sink.

Sophia: Let me tell you girls the three most important things I learned about life: number one, hold fast to your friends; number two, there's no such thing as security; and number three, don't go see Ishtar. Woof.

Sophia: Please. Pay no attention to him. The man spent 90 days on the high seas drinking grain alchohol from a goat bladder.

Sophia: You're Blanche's daughter, the model?

Sophia: What did she model — car covers?

Dorothy: Well Blanche is certainly taking her sister's novel better than I would. I would kill my sister Gloria if she ever wrote about my sex life.

Sophia: You would kill your sister over a pamphlet?

Rose: Everybody likes me.

Sophia: Blanche, a terrible thing has happened to you. But when life does something like this, there are a couple of things you got to remember. You got your health, right?

Sophia: You can still walk, can't you?

Sophia: Great, go get me a glass of water.

Sophia: Look, you didn't ask me for my opinion, but I'm old, so I'm giving it anyway.

Estelle Getty, the diminutive actress who spent 40 years struggling for success before landing a role of a lifetime in 1985 as the sarcastic octogenarian Sophia on TV's The Golden Girls, has died. She was 84.

Getty, who suffered from advanced dementia, died at about 5:30 a.m. Tuesday at her Hollywood Boulevard home, said her son, Carl Gettleman of Santa Monica.

"She was loved throughout the world in six continents, and if they loved sitcoms in Antarctica she would have been loved on seven continents," her son said. "She was one of the most talented comedic actresses who ever lived."

Three of its stars had already appeared in previous series: Bea Arthur in Maude, Betty White in The Mary Tyler Moore Show and Rue McClanahan in Mama's Family. The last character to be cast was Sophia Petrillo, the feisty 80-something mother of Arthur's character.

When she auditioned, Getty was appearing on stage in Hollywood as the carping Jewish mother in Harvey Fierstein's play Torch Song Trilogy. In her early 60s, she flunked her Golden Girls test twice because it was believed she didn't look old enough to play 80.

"I could understand that," she told an interviewer a year after the show debuted. "I walk fast, I move fast, I talk fast."

She came prepared for the third audition, however, wearing dowdy clothes and telling an NBC makeup artist, "To you this is just a job. To me it's my entire career down the toilet unless you make me look 80." The artist did, Getty got the job and won two Emmys.

It culminated a long struggle for success during which Getty worked low-paying office jobs to help support her family while she tried to make it as a stage actress.

"I knew I could be seduced by success in another field, so I'd say, 'Don't promote me, please,'" she recalled.

She also appeared in small parts in a handful of films and TV movies during that time, including Tootsie.

After her success in The Golden Girls, other roles came her way. She played Cher's mother in Mask, Sylvester Stallone's in Stop or My Mom Will Shoot and Barry Manilow's in the TV film Copacabana. Other credits included Mannequin and Stuart Little (as the voice of Grandma Estelle).

The Golden Girls, which ran from 1985 to 1992, was an immediate hit, and Sophia, who began as a minor character, soon evolved into a major one.

Audiences particularly loved the verbal zingers Getty would hurl at the other three. When McClanahan's libidinous character Blanche once complained that her life was an open book, Sophia shot back, "Your life's an open blouse."

Getty had gained a knack for one-liners in her late teens when she did standup comedy at a Catskills hotel. Female comedians were rare in those days, however, and she bombed.

Undeterred, she continued to pursue a career in entertainment, and while her parents were encouraging, her father also insisted that she learn office skills so she would have something to fall back on.

Born Estelle Scher to Polish immigrants in New York, Getty fell in love with theater when she saw a vaudeville show at age 4.

She married New York businessman Arthur Gettleman (the source of her stage name) in 1947, and they had two sons, Carl and Barry. The marriage prevailed despite her long absences on the road and in The Golden Girls.

Getty was evasive about her height, acknowledging only that she was "under 5 feet and under 100 pounds."

In addition to her son Carl, Getty is survived by son Barry Gettleman, of Miami; a brother, David Scher of London; and a sister, Rosilyn Howard of Las Vegas.

-- From The Associated Press.