Accessibility links
Does Obama Owe A Debt To Blacks In Sports? There's a chance Sen. Barack Obama would still be on the road to being the Democratic presidential nominee if it weren't for the acceptance of black athletes and coaches in American sports. But Frank Deford thinks it's a slim chance.

Listen
Does Obama Owe A Debt To Blacks In Sports? 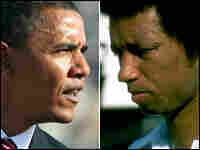 Like Arthur Ashe and others who broke the color barriers in their sport, Sen. Barack Obama's presidential run is making history. Salah Malkawi-Getty Images/Allsport hide caption 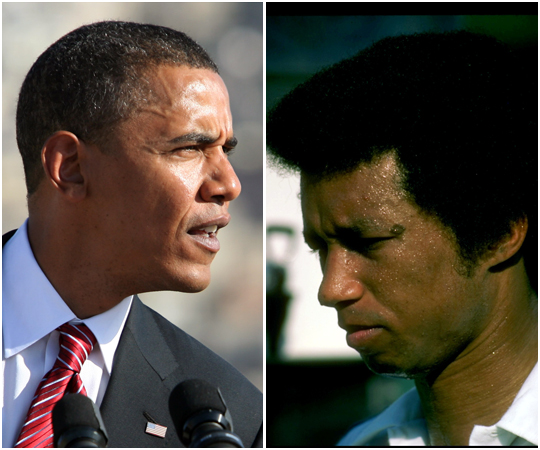 Like Arthur Ashe and others who broke the color barriers in their sport, Sen. Barack Obama's presidential run is making history.

Obviously, there are so many factors that have been applied, incrementally, to bring us to a place where an African-American can be elected president. But I cannot help believing that the ubiquity and esteem of the black man in sport has played a significant part in this transformation of the body politic's thinking.

You see, the way the black athlete has evolved in the public mind has made him something of a precursor for African-Americans in other visible fields. Originally, in fact, blacks in sport were confined strictly to the arena. Many of the biggest stars — Jim Brown, Bill Russell, Muhammad Ali — seemed downright threatening.

Endorsements invariably went to lesser white athletes, for advertisers simply assumed that a product's association with even a noncontroversial black player must be off-putting to white consumers.

But, my — as well we know — how that changed. By the 1990s, Michael Jordan was accepted as the most prominent pitchman on the planet, and he has been primarily succeeded by Tiger Woods.

From a cultural point of view, this sea change in attitude in sport signaled that race did not constitute that much of a difference in public figures — which, ultimately, of course, leads us to Barack Obama.

Similarly, I've always felt that the recent ascendancy of black movie stars — notably Denzel Washington and Will Smith — can be largely accounted for by the prior acceptance of the black athlete.

Whereas Washington and Smith usually are viewed as the heirs to Sidney Poitier, he was really something of an anomaly, a distant one-off, separated by so many years.

But the celebrated African-American athletes were, in effect, leading men themselves, so an audience that grew up with the likes of Jordan and — just as important — all the black stars who were local heroes for hometown teams, could so much more easily accept the same sort of Hollywood crossover.

It's also true that just as the black superstar was, for so long, denied the chance to be a personality, so was the smart black player denied the opportunity to lead.

Now, we don't get the chance to see most decision-makers making decisions. But we can watch coaches and managers pulling strings on the sidelines. Surely it was most influential to be able to see black men dispensing judgment in those visible positions, and to see that black coaches were, as a group, just as smart — and just as dumb — as white coaches. Vivid equality.

Look, maybe Barack Obama would be the Democratic nominee if there had never been a Frank Robinson and a Michael Jordan and a Tony Dungy and a Derek Jeter. But I really don't think so.

I think the black athlete has, ultimately, made a deep, if subconscious, impression on whites. He's been heroic, of course. But beyond that, it's he who has had the chance to show whites that he can be congenial — "just folks," just like the white guy next door — and that he can demonstrably lead people, yea, even to championships.

This evolved comfort factor for fans must have eased the path for Obama, with voters.

As a closing fillip, it's always said that Obama is different from the African-American politicians who preceded him. I agree. He reminds me more of Arthur Ashe than anyone in his own business.